Who doesn’t love a fried potato? Potatoes, as simple and unpretentious as they may be, transform when they’re fried. The crunchy outer edge of a just-greasy-enough potato latke with a side of sour cream is about as good as it gets.

The origins of potato latkes didn’t start with Hanukkah, though that’s where they have gained most of their popularity via the traditions of this eight-day Jewish festival. The holiday dates back to 168 BCE, at which time Jews found themselves developing recipes to celebrate the tradition based on where they lived. Those on the Mediterranean coasts used fresh-pressed extra virgin olive oil to fry foods because Hanukkah coincides with the end of olive harvest season. Potatoes were not only readily available to European Jews, but they were cheap and easy to store for long periods of time. Thus, the tradition of latkes blossomed, and Jewish mothers kept hungry children at bay with a simple potato recipe.

Step 1: After you peel your potatoes, place them in water to prevent browning. While you’re peeling potatoes, heat oil in a large skillet.

Step 2: Cut potatoes in half and use a cheese grater or food processor to create thin, short, spaghetti-like strips. Use a cheese cloth to drain all the moisture out of the potatoes.

Step 3: In a medium bowl, place the shredded potatoes with the rest of the ingredients and stir until evenly mixed.

Step 4: Drop spoonfuls of the mixture into the hot oil and press down with a spatula to flatten them into pancake form. Cook on each side for 3–4 minutes or until the tops are a nice brown color and crispy.

Step 5: After you’re done frying the latkes, allow them to dry on paper towel and blot away any excess or unwanted oil.

Step 1: Take the sour cream out of the fridge and let it soften a little bit while you cook the latkes.

Step 2: Peel avocado and add it to the sour cream in medium bowl along with the lemon juice, salt, pepper, and garlic powder.

Step 3: Depending on how ripe your avocado is (the riper, the better), you may have to use a hand mixer/blender to mix the sauce. If the avocado is super ripe, you should be able to mix it until it’s a smooth consistency. 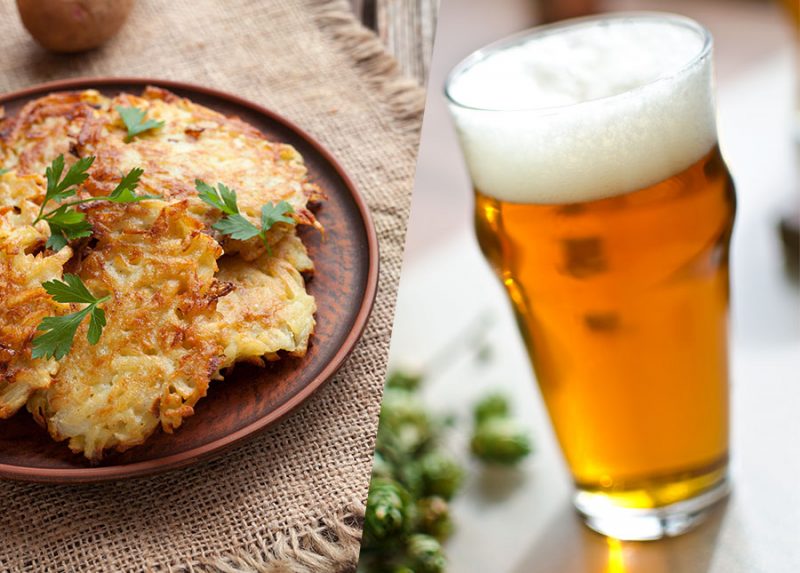 It’s hard to think about what to pair with a fried potato because, let’s be honest, they take on the flavor of anything you cook them with and they’re pretty delicious with virtually anything. I decided to go with a fish-and-chips concept by pairing these latkes with an English-style strong bitter (sometimes generically called “ESB” in North America, but ESB is a trademarked brand of the Fuller’s Brewery in London). The biscuit-like and bready aroma of the strong bitter will complement that toasty fried crunch on your latkes, while the mild bitterness will elevate the flavors of the avocado cream sauce. This meal can get pretty heavy between the fried potatoes and the dairy, so the sessionable qualities of the English pale ale make it a great pairing as well.

When finished, carbonate beer to approximately 1.5 to 2 volumes (3 to 4 g/L) of carbon dioxide. Since this beer has a fairly light body, excessive carbonation can make it seem extra thin, harsh and hard to drink. With the right level of CO2, the body will be just right, and it won’t seem watery or harsh.

Hailing from the South, Millie Shamburger has developed an affinity for the beer industry and all the shiny things that come with it. When not exploring beer, Millie is in the kitchen, enjoying the outdoors, and wearing out her dancing shoes.

How to Make Sour Cream at Home