Why did you make your first batch of beer?

I started homebrewing in 1985 by brewing a pale ale. It turned out pretty darn good! Before that I was a wine and mead maker. Previous to that I was a bread and sourdough maker from the age of 10.

When I graduated from university and moved from Wisconsin to California, good wine was cheap and wasn’t worth making, so I switched to beer. Some of my early homebrew recipes included a honey lager and a raspberry ale.

Before going professional, I was working as a computer programmer in a cubicle at a Fortune 100 computer company and hated it. When I attended the AHA National Homebrewers Conference in 1988 and met Charlie Papazian, Michael Jackson and many other craft beer pioneers, I learned about the Siebel Institute of Brewing Technology in Chicago. I made up my mind that weekend that I would attend the Diploma Course at Siebel and join the beer industry. I could always fall back on computer programming, right?

I’m a very broad consumer of beers, so I never really understood the whole beer hunting scene, even after learning about “Dark Lord Day” at Three Floyds during my Road Brewer trip in 2007. I’ll say I’m a beer collector now, but I don’t go overboard with it. However, my husband and I have a very nice beer “cellar” closet. 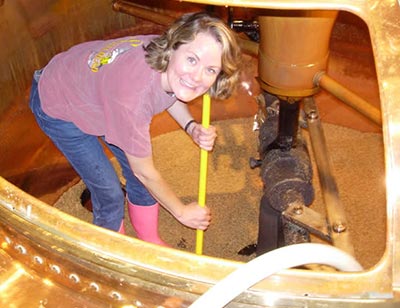 Yes, but first, my best safety advice is disasters are normally never the result of one mistake, but rather several small mistakes adding up to one disaster. In my case, the small mistakes weren’t being properly trained on the equipment, trying to use a 7-barrel kettle as a 10-barrel kettle because of bad advice, and not doing a visual check on the contents of the kettle after I thought I’d pump it dry.

These three things culminated to 3rd degree burns, skin grafts, medical bills, my mother flying out to take care of me, loss of work for two months, dealing with skin healing and surgical garments for two years and poor circulation in my foot for the rest of my life. However, I wouldn’t be the tough woman I am today without having this experience, but I don’t recommend a disaster to toughen you up. You can find a more detailed story here.

What is your favorite style(s) to brew?

I’m experimenting with Belgian yeasts at this point, but plan to play with mixed wild cultures soon.

Never say never! I’d ferment anything! Lemons, cashew nuts, kombucha, kim chee. I’m a fearless fermenter because how can you learn if you don’t make mistakes? My current motto is “make lots of mistakes as quickly as possible.”

What is your favorite malt?

A trick question! I sell about 150 different malts, and many are amazing. Here are some of my favorites.

Chinook: It’s old school, but Chinook is such a great all around hop for bittering, flavor and aroma without breaking the bank.

What is your dream beer and food pairing?

Echt Kriekenbier and A Bistro Burger with Camembert cheese at Higgins Restaurant in Portland, Oregon!

In the late 1980s I belonged to the San Andreas Malts in San Francisco, where I was the only female. It was a blast, and I got razzed a lot about my lengthy brew-log notes. About 10 of us went professional at a time when very few people wanted to become professional brewers. It wasn’t cool. It was a dirty job, the pay wasn’t great and half the time the brewery you worked for went out of business. Somehow most of us stuck with it.

I’m a malt rep for Country Malt Group, a sister company to Brewcraft and Great Western Malting company. For 2015, I want to homebrew more often, and drink amazing craft beer from all over the world.

You started Pink Books Society to empower women in the beer industry. What do you want people to know about it?

We have over 1,700 members and about 50 chapters worldwide, and we give away 12 scholarships per year in the United States. I put seven and a half years of my life outside of work into Pink Boots Society, and we have a lot of volunteers working very hard to keep it going.

So, when you see this year’s International Women’s Collaboration Brew Day beer, Unite Red Ale brewed on March 8, each year, on tap or in bottles, buy it because some of the money raised will go to Pink Boots Society!

What did it mean to you, and the craft beer industry as a whole, for you to be a woman brewmaster?

At the time, I just wanted a brewing job. I assumed nobody would hire me as an assistant brewer because I was 5’6″ and 120 pounds, so I attended Siebel Institute because I knew I had to sell my brain over my brawn. I’ve always bit off more than I could chew, but I work hard and I make it work. I’ve never thought of myself as a woman brewer, just a brewer.

As a woman in a male dominated industry, I never felt alone. Obviously I noticed the other brewers were guys but, remember I consider myself just a brewer. I did feel like I represented my gender in the beer industry. For the first 15 years I judged beer at the Great American Beer Festival, I wore dresses just to balance out the testosterone!

When I departed on my Road Brewer Trip in 2007, I wore pink boots because I knew I would be the first woman brewer many of my host brewers met, and I felt responsible for representing my gender. Many times over the years I noticed I was the only woman sitting at the table, which isn’t such a bad thing because when you’re the only woman at the table, you’re also the prettiest!

However, not all women felt the same way. So, I started Pink Boots Society because I met some women who really did feel lonely and wanted to talk to other women in the industry.

Did you have any frustrations from when you started until now? What’s your motivation?

Not many frustrations. My motivation is pride of work, creativity, competitive assertion, and having a job that puts smiles on people’s faces. When you look up the word “stubborn” in the dictionary, you’ll see my picture.

Craft Beer. Today, what does that term mean to you?

Four qualities: Excellent beer made with approximately double the ingredients per barrel compared to the mega brand beers. Interesting beer made with one eye on traditional styles and the other eye on cutting edge of possibility. Flavorsome beer made with a nod toward food and traditional food flavors. Quality beer made locally by passionate brewers in small quantities and distributed to half the USA or less.

What do you want to say to the community of homebrewers?

I love you! You’ve made my life’s work possible! First I was you; then you bought my beer; now you buy our malt. Homebrewers are the best beer consumers and the Craft Beer Revolution wave I’ve been riding professionally for the last 27 years wouldn’t have happened without you. You absolutely rock!

How to Adopt and Activate the Independent Craft Brewer Supporter Seal