Currently, his focus is on video work for Chop & Brew and his awesome day job at Summit Brewing Company in the position of Digital Marketing Coordinator a.k.a. social media nerd.

What got you into brewing?

Back in 2007, I was already a craft beer fan and was thinking about homebrewing after hearing a bit about it from friends. While working as a field producer for a news station in Austin, Texas, I produced a story on homebrewing and spent a few hours at the house of a homebrewer, following him through the process. I was blown away at how fun it looked and how awesome his beer tasted.

It seems like a natural progression for people that really love craft beer to begin homebrewing. Through homebrewing you gain a new level of appreciation for the ingredients, process and skill that goes into brewing.

What is your favorite style to brew?

I really enjoy brewing saisons, partly because of how wide and varied the style can be flavor-wise and process-wise. They can be floral and tart, clean and peppery, light-colored or dark. And they are really fun to play with when it comes to fermentation temperatures. I have fermented some saisons in 60- 70°F, then I have pushed others into the mid-90°F—all with very interesting results.

What was the first beer you ever brewed?  How did it turn out?

Like many homebrewers, my first brew was an American brown ale. It was an extract kit from Austin Homebrew Supply. The staff at the store suggested starting with a brown ale because it had enough going on that if some of the process wasn’t up to par, the beer would still turn out okay and would be something you would enjoy drinking and sharing. And it was. It turned out very nice.

Are you a BJCP Judge?

I am a Certified BJCP judge. While I wasn’t certified until spring 2013, I have been judging at competitions since early 2009. The first time I ever helped with a competition, I was signed up to be a steward at the Upper Mississippi Mash Out. I showed up and they said, “We need judges, are you a judge?” I said, “Not yet.” And they said, “Well, today you are!” and they put the guidelines in front of me to judge a flight of Irish Red Ale—paired with two National judges of course. Trial by fire for sure!

Since then, I have judged homebrew competitions where I live in the Twin Cities, as well as regional contests, competitions in Nashville and Chicago, and early rounds of the National Homebrewers Competition.

Do you have a favorite homebrew trick or gadget that you’ve found to make your beer better/brewing easier, etc?

No joke: a skateboard. I recently discovered that I can use an old skateboard to move kettles or fermenters full of liquid from one part of the garage or basement to the other without lifting and carrying.

For brew in a bag recipes, I discovered that if you cross a mash paddle and a large spoon in an x-shape on the rim of the boil kettle you can rest/support your bag on it so that it drains wort over time instead of standing there holding it and messing up your back or tossing the bag before all the good stuff has been extracted.

Another great trick I learned from a former co-worker at Northern Brewer is to use a wort chiller to slowly lower an over-shot mash temperature instead of water (and possibly over-diluting your mash). It works and it’s awesome. 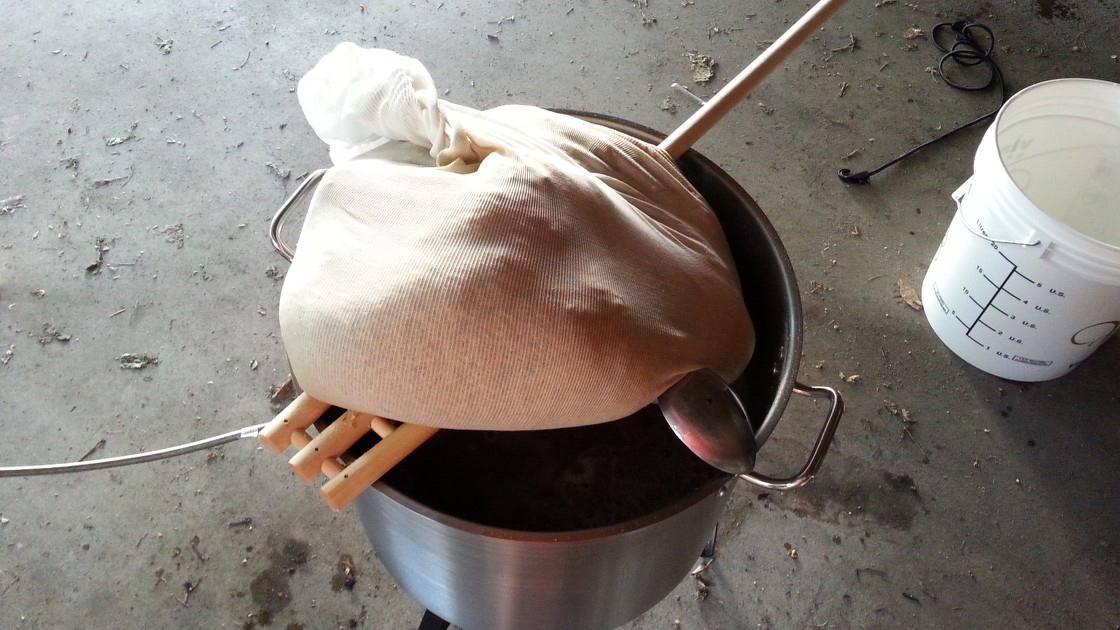 For the most part, I brew outdoors brew in a bag or all-grain. I have a lot of available components like coolers, kettles, stands and such—so the brew “system” changes a bit depending on what I’m brewing.

What is your dream food and beer pairing?

In the past I have belonged to the Austin ZEALOTS and Minnesota Homebrewers Association. I am still sort of an honorary member of both I suppose. For the three years I worked at Northern Brewer I proudly represented the Northern Brewer Fermentation Brigade.

Now I claim Chop & Brew Homebrew Club. I have yet to enter (thus, win) any medals, but we have had at least a half-dozen club members from all over the country (and one from Germany!) win medals in 2013 and 2014 including my buddy Mino Choi who just won a bronze, silver and golden medal at the Upper Mississippi Mash Out and Best of Show in Mead.

That was a quite an evening for Mino and the Chop & Brew Homebrew Club. The C&B club is not geographically centered so basically if you like the Chop & Brew webshow and/or don’t have a club to call your own—call us your own!

Jump right in and brew your first batch. Perhaps even just a small batch—but brew something to prove to yourself that you can do it. I think people tend to over-think it and read and read and read to the point where they scare themselves out of trying it or work themselves into a frenzy over every small detail. There is plenty of time for over-thinking later. For now, just brew a batch.

I would also like to say don’t be scared to try new things. When you cook, you make changes to recipes based on what you do/don’t like and how you know the process is going to work out. Brewing is no different. Take a recipe and make it your own with some changes to the ingredients or the times or by simply using a different yeast.