When did you start brewing?
I’m really not sure of the date, but I bought a Beer Machine 2000 and tried a few of their kits. I was unsuccessful (if a simple drinkable beer is success!) and I thought brewing at home was probably too hard for me at that time.

What got you brewing?
In early 2006, my own hockey teammate crashed into me and broke my leg. Since I was bored, and laid up for a long time, I needed a new hobby! Because I had a rudimentary understanding of fermentation and sanitation from my winemaking, I gave up hope on the Beer Machine, and used my wine equipment to brew up a batch from a Brewer’s Best kit.

When did you know this was no ordinary hobby, it was an obsession?
Right at that first batch! I think pitching the yeast was where I got hooked, and then once I tasted the product I knew that I was obsessed.

What is your “white whale” beer (the beer you’d hunt to the ends of the earth for, and possibly die trying to obtain)?
I’m a huge hophead, so I’m a great fan of Pliny the Elder (Russian River Brewing Company). The only way I could think of to make it the “white whale” beer would be to keep the great flavor, but make it a session-sized beer so I could drink more than one or two at a sitting!

What is your favorite local craft brewery?
We live in the Upper Peninsula of Michigan, a big vast beer wasteland. The nearest city is Green Bay, Wisconsin where I love to visit Titletown Brewing Company. The nearest and best craft brewery to us may be Surly Brewing Company in Minneapolis. It’s not widely distributed, but they makes the most amazing beers, and when I get to the Twin Cities, my first stop is to supply myself with Surly Furious, their wonderful IPA. Every Surly beer is a treat, though!

Do you have a homebrewing disaster you’d like to share?
I have had lots of disasters, but none I’d really like to share! One is pretty funny, though. I used to brew on my stovetop, which worked well. I ran an immersion chiller, but it always took about 20 minutes to chill my wort. One day, I wanted to save the waste water to fill my aquarium, so I diverted the water into a 10 gallon cooler. I guess I forgot and went into the other room to use the computer, and went out and emptied the mash tun. I was soon alerted that something had gone wrong by the sound of cascading water. I ran into the kitchen and found ankle deep water. The cascading sound was caused by a beautiful waterfall going down into the basement via the basement steps. You apparently can’t put 50 gallons of water into a 10 gallon cooler!

What is your favorite style(s) to brew?
As a hophead, I make far more IPAs and APAs than anything else. My saying is, “So many hops, so little time!”

What style(s) will you never brew?
“Never” is too strong, but I don’t see me making a Brett beer anytime soon!

What was the first beer you ever brewed? How did it turn out?
The Brewer’s Best English Brown Ale kit. It turned out great, actually, and I was hooked for life. (Of course, we’re ignoring the results of the Beer Machine 2000 debacles).

Do you have a favorite homebrew trick or gadget that you’ve found to make your beer better/brewing easier, etc?
I’m 47 now, and 135 pounds or so. Lifting has always been the biggest pain for me (literally and figuratively!). A stand with a pump has really been a lifesaver for me. Brewing is more fun when you’re out of the kitchen and working with a nicely designed system, although the beer probably isn’t any better than when I had a bucket and a cooler. 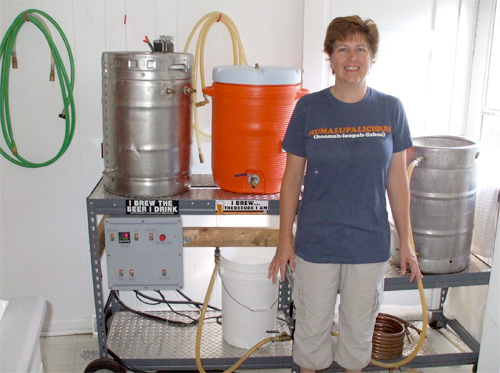 Describe your brew system.
It’s an all electric two-tier HERMS that I’ve set up in my laundry room. We have a cold climate, so I love brewing indoors! The newly redesigned HLT has a site glass, a 5,500 watt element, a HERMS coil, and a small stirring motor, all in a keg that has a bottom drain. The MLT is still my old 10 gallon Igloo cooler, that is on the top tier. I gravity drain my MLT into my boil kettle, that has a 4,500 watt element inside. My control panel is mounted just below the HLT. There is one March pump and I use a counterflow chiller. My friend Leon Schiavo did the electric work for me, and created the entire control panel. It’s really awesome!

Do you have a good beer judging story you’d like to share with the rest of the homebrewing world?
I moderate an internet forum, so I often have people asking me to judge their beer. One guy sent me a few lagers that he was quite proud of. They looked great, and I eagerly pulled out my score sheet. I opened one and even upon pouring was greeted with a harsh astringent aroma that was overpowering. I soldiered on and took a sip and there was a powdery astringent taste that dried out my mouth instantly. It was probably the worst beer I have ever tasted in my life. I tried to be gentle, and emailed him my thoughts including that I thought he had some tannin extract, and possibly some water chemistry issues. He replied back, “Yes, I noticed the astringency, too. But how did you like the beer?!?!”

How frequently do you brew?
I try to brew twice per month.

What is your favorite malt? Why?
I wouldn’t necessarily call it my favorite, but I use a ton of Briess two-row! It’s the base malt in many of my U.S. styles. I use a lot of Crisp Maris Otter also. 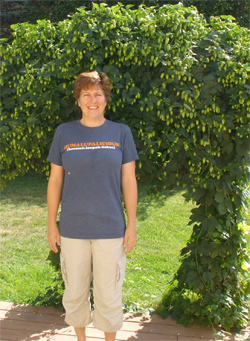 What is your favorite hop? Why?
I’m a huge fan of Amarillo hops, for their smooth bittering qualities and the great grapefruit flavor they provide when used as finishing hops. They are great for dry hopping too!

What is your dream beer and food pairing?
I’m a pretty simple girl; IPA and a great pizza are about all I need.

Do you have a favorite or house yeast? What qualities do you like about that yeast?
I’ve been using Wyeast’s 1450, Denny’s Favorite 50. It’s a great strain that accentuates the malt and gives a luscious mouthfeel, but never tastes sweet or under attenuated. The hops come through as well. It’s a nice, clean strain. I’ve used it in American ambers, oatmeal stout, IPAs, APAs, and even IIPAs with great results.

What is a beer style that is underappreciated and/or could take off given the opportunity and exposure?
I think the most underappreciated style right now is British mild. It’s really the perfect beer—full flavored, but low enough in alcohol that you can have a few pints and still be sober. The yeast character, some crystal malts, muted hop character and low ABV make it refreshing and so drinkable. Served on cask, it’s such a treat!

Is there any advice you would like to give to new homebrewers?
The best advice I have is to not give up! You can make great beer at home with just a few ingredients and not much equipment. The most important thing you can do to improve your brewing is to take care of your yeast. Pitch the correct amount of yeast (many brewers under pitch) at the correct temperature, and control fermentation temperatures. Many of the beers I’ve judged that have flaws could be fixed just by keeping the temperature lower. You don’t need a $3,000 system to make great beer—a simple home bucket/cooler system can be just as effective!

Do you have a mentor or someone you think the world should know about? Or, tell the homebrewing community a little bit about yourself so we can get to know you! Post some background info on the AHA Forum under the Hombrewer Bios category, and that person may be selected as the next Brewer of the Week.

The AHA Forum is communications central for the brewing community. Draw upon the collective knowledge of homebrewers around the world to get your questions answered. Help out your fellow homebrewers with their questions.

We Don’t Need No Stinkin’ IBUs