J.B. Zorn, who currently lives in Fairfax, Virginia, does it all. He has been on active duty in the U.S. Coast Guard for over seven years, has been homebrewing for nine years and medaled in a few competitions. He’s also written articles for Zymurgy, is a Certified Cicerone® and proposed to his wife with a homebrew. Bravo!

We had a chance to talk with J.B. about homebrewing while on active duty, his plans for Veterans Day, and a few Veteran-themed homebrew recipes. To all of our homebrewing veterans, and their brothers and sisters in arms, thank you for your service.

Homebrewing and beer have always been a social activity for me. I’ve found it to be one of the most fulfilling hobbies someone can have. Brewing combines science and art, all while being relatively economical and fun—you can’t beat it. Best of all, it’s social and can bring people together from different backgrounds. 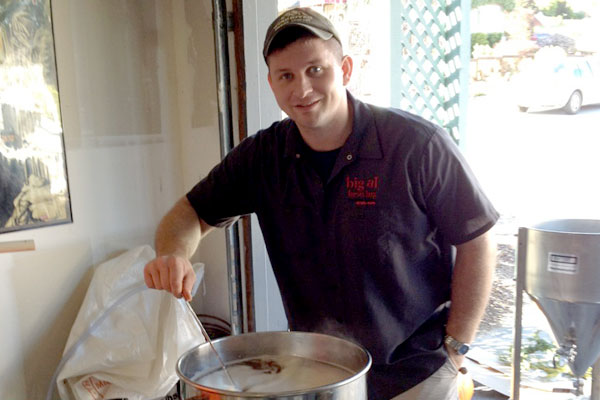 When I was a midshipman at the U.S. Merchant Marine Academy, I remember having a “long weekend,” which meant I got to spend two nights at home, and my dad had recently received a homebrew kit. With little to no experience, we brewed a lager, and without temperature control or any real knowledge of sanitation, I remember it turning out pretty rough. My dad ended up drinking it, but I wasn’t impressed.

Later that year, a great friend and neighbor of mine, Dave, offered to assist us. He was one of the first generations of American homebrewers with lots of experience doing everything from pale ales to cider and mead. His homebrew tutelage got us over the beginner hump to making some darn good beer.

My interest prospered back at the Academy. Several of the more senior officers were kind enough to share their love of beers from all over the world that I’d never tried, especially English styles. We even brewed a batch called, “Commodore Hopenfield,” a valiant attempt on an American IPA, before graduation.

I knew I was hooked for life during my first tour in Honolulu, Hawaii. Upon arrival, I realized the wide variety of breweries and beer styles were simply unavailable in the islands or suffered from long transit times. Thus began the never ending quest for great beer.

Describe being on active duty and trying to homebrew?

It’s been a fantastic opportunity so far with a lot of unique opportunities and great people. At its best, there is a great sense of community and purpose. There are also a ton of outstanding Coast Guard (CG) brewers out there!

I’ve tried to embrace the fact that moving every few years is a part of CG life. Each tour brings new challenges and opportunities along with some great geographic diversity (Honolulu, Monterrey and Washington, D.C.). I try to challenge myself to create a new beer goal with each tour.

Honolulu was my introduction to homebrewing. I jumped from extract to all-grain and started recipe development. I got my feet wet with entering and organizing a few competitions. And of course, met some amazing folks along the way. The HOPS homebrew club in Honolulu and Mike, who works at Homebrew in Paradise, were ambassadors of the craft for me. 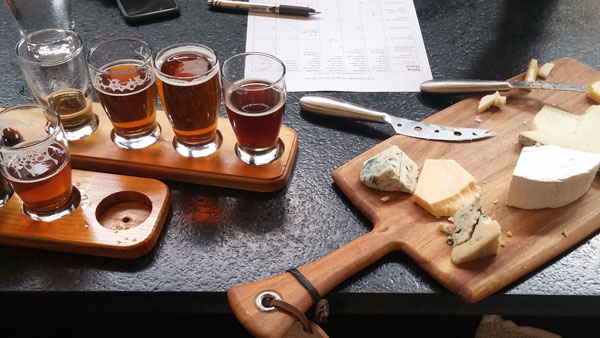 I took a big step forward in Monterrey with brewing. I started to get serious about competitions, became a recognized BJCP Judge and organized a number of AHA-sanctioned competitions. The homebrew community seemed to be thriving in that part of California. I also was lucky to be part of a few charity homebrew festivals that raised a considerable amount of money for Wounded Warriors Project!

Virginia has seen a shift in my available time, with the arrival of my son, so I looked into the prospect of the brewing industry professionally. I became a Certified Cicerone®. To my knowledge, I may be the only active-duty Certified Cicerone® out there, but more importantly, it was a great opportunity to research and learn about the craft from a different perspective.

What do you find valuable about the AHA?

I joined the AHA back in 2009. I had caught the homebrew bug and was looking all over the web for more resources and information to take my beer to the next level. After my wedding in 2010, I put together a short article for Zymurgy, which got me excited to continue sharing my beer journey.

You and your wife have an interesting homebrew story.

Yes, it’s an easy date to remember because it was New Year’s Eve and we met an hour or so before midnight. I can’t remember the brew day very well, but my records show an extract with steeping grain version of saison. Ironically, I found out about a month later that Saison was one of my wife’s favorite styles. 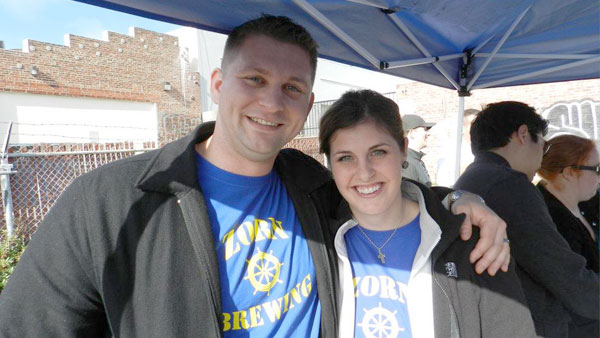 I set out to brew a special Saison and craft my best argument for why she should marry me on the side of a bottle label. We had to meet at my parent’s home in Maryland because I was on orders for a month of training in Yorktown, Virginia. It took some effort, but after coordinating the ring shipment and packing that special bottle in my suitcase all the way from Hawaii, I was able to chill it and waited until my folks went to bed before popping the question. The rest is history.

I still have the intact bottle, even after three military transfers later. Saison was always a special style for our relationship, and I wanted to incorporate that some way into the proposal, especially considering I brewed that style the first day we met.

My wife still loves Saisons, but she’s pregnant with our second child, so I try not to brew it often for fear of retribution.

What was it like to plan a homebrew wedding?

First, I should mention is that I had a lot of help! From the tap tower, which we built specifically for the ceremony, to the beer styles, it took months of planning. We brewed a wide variety of beer styles, but also wanted to reflect our personal preferences. 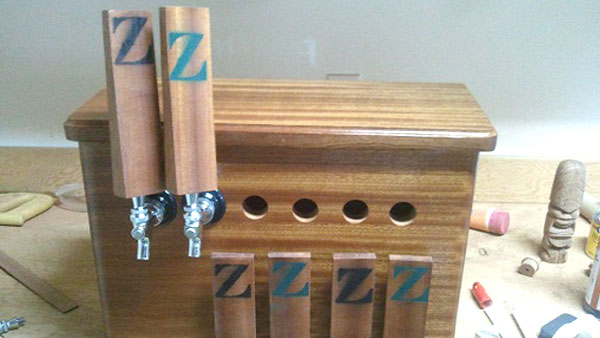 We also brewed special bottled beers for the fathers: Pop’s Hops Imperial IPA for my dad and Big Ron’s Maple Brown Ale for my wife’s father. Everything was very well received, and my mother and I substituted the traditional mother-son dance for a mother-son toast of homebrew, of course.

Any Brewing Plans for Veterans Day?

Yes! On Veterans Day, I’m having some co-workers over for an epic brew day. I plan to brew my first Weizenbock (decoction mash) just in time for Christmas, a Helles and possibly a Biere De Noel. 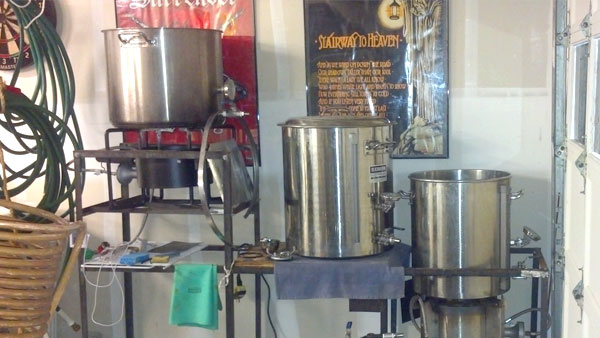 What’s your favorite style to brew?

If I had to pick my desert-island beer style, it’d have to be American Pale Ale. In my mind, it’s the perfect balance of vibrant hop flavor against a solid malt backbone all while being drinkable.

That being said, I’m a big fan of brewing seasonally. In general, I like to have a quarterly party where I get to share six beers, using that same tap tower I handmade for my wedding. It usually includes something Hoppy, Dark, Belgian/Saison and a German Lager.

If you’ve been involved in the hobby long enough, who hasn’t? I remember a batch of hoppy wheat ale way back in Hawaii. It was a five hour brew day. When I filled carboy and pitched the yeast into my fermentation fridge, and the carboy slipped and shattered at my feet. Awful.

Hell yeah! I’m always looking for opportunities at home and in the community. Right now, I’m finding a good balance between U.S. Coast Guard, family, and beer opportunities. One of my goals is to continue to learn while also sharing my passion for beer and brewing in an approachable way, like so many of my brewing inspirations. I’ve recently started to host more professional beer events, such as Beer and Cheese Pairings and Beer Dinners.

There’s also been an exciting trend in recent years for homebrewing and beer books, which has inspired me to look into writing more for publications and even possibly assembling a compilation of my experiences, thoughts and recipes into a book.

Of course! I believe collaboration breeds innovation, which is the beauty of beer recipe sharing and continuous learning. With Veterans Day around the corner, I’d like to honor a couple of my favorite Veteran-themed brews: