The AHA’s general and liquor liability insurance for homebrew clubs is facilitated through West’s Insurance Co. and is the only plan of its kind that will cover your club’s meetings and events up to $1 million per occurrence for the very affordable annual premium of $3.75 per member. More than 400 homebrew clubs signed up for coverage last year, representing approximately 17,750 homebrewers around the United States.

In accordance with the AHA’s pledge to provide free insurance to clubs with high rates of AHA membership, 47 of those clubs also received checks reimbursing their premium payments, as 75 percent or more of those clubs’ members were also AHA members. The AHA reimbursed over $5,000 in total insurance premiums to eligible clubs during the 2018–2019 policy period.

The Rockhoppers Brew Club in Castle Rock, Colo. was one of the 47 clubs to hit 75 percent AHA membership, and receive free insurance.

“Receiving free club insurance from the AHA was fantastic!” said Rockhoppers president, Mike Bostwick, “We enjoyed the refund we received and used it to support our annual BJCP club competition, Biere de Rock, which specializes in Belgian style beers. Biere de Rock is our primary club fundraiser and has been a premier Colorado homebrew competition for nearly ten years.”

Check out my tips on how to get free homebrew club insurance from the AHA!

In addition to the Rockhoppers, both the Bloomington Hop Jockeys in Bloomington, Ind., and the Homebrewers of Greater Bangor in Bangor, Maine, reached AHA membership greater than 75 percent. These clubs used their premium reimbursements to fund new jockey boxes, allowing them to have more homebrew on tap at events.

The 256 Brewers in Huntsville, Ala., used their reimbursement funds to purchase logo stickers for new members and to give away at club outings, while the South Sound Suds Society in Olympia, Wash., was able to purchase various pieces of brewing equipment to offer as door prizes at their club’s annual Big Brew event.

The AHA’s club insurance program has grown every year since its inception in 2014, when 253 clubs opted for coverage during the first-ever policy period. Prior to 2014, many other homebrew clubs found themselves paying exorbitant fees for basic insurance packages that didn’t fully cover many of their group events. 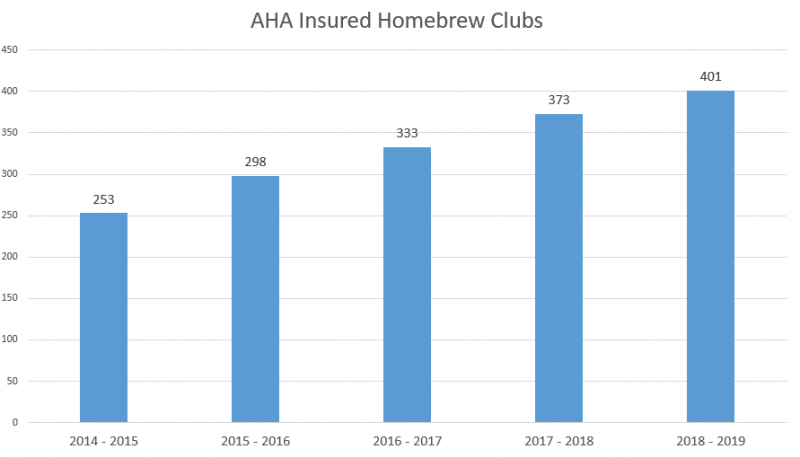 The number of homebrew clubs opting for insurance coverage through the AHA’s plan facilitated through West’s Insurance has grown every year since it’s inception in 2014.

“Our club used to get insurance on the open market. It was about $900 to insure our board of directors and $1,700 for the whole club,” said Roxanne Westendorf, current AHA Governing Committee chair. Roxanne is the former president of the Bloatarian Brewing League in Cincinnati, Ohio, a club that now gets general and liquor liability coverage for less than $500 for all 129 of its club members through the AHA.

“The club insurance program has saved our club a lot of money and given us the alcohol coverage that we couldn’t get before!” Roxanne continued. “We participate in both the general and liquor liability and the D&O insurance programs.”

In addition to the general and liquor liability insurance coverage, the AHA also makes a directors and officers (D&O) insurance plan available through West’s Insurance. During the 2018–2018 policy period, 39 clubs signed up for D&O coverage, which offers added liability protection for club leaders in elected positions. The AHA does not offer reimbursement for the D&O plan.

Homebrew club insurance open enrollment starts July 1, 2019, and the deadline to sign up is Sept. 1, 2019. The insurance policy period will run from Sept. 1, 2019 to Sept. 1, 2020. Clubs that hit 75% AHA membership and become eligible for premium reimbursement will automatically be mailed a check from the AHA.

Clubs that miss the September open enrollment deadline will have the opportunity to sign up again for the late-enrollment 9-month policy that begins on Dec. 1, 2019 for $3.75 per member, or they can sign up for the 6-month policy period that runs from March 1, 2020 to Sept. 1, 2020 for $1.88 per member.