The Frogtown Hoppers, a Toledo, Ohio–area homebrew club, conducted a multi-site AHA Big Brew Day for 2016 and a makeup day at a member’s residence the weekend after. Thirty-six brewers, seven of whom were first-time brewers, made 27 batches of beer totaling 168 gallons. Introducing newcomers to homebrewing is important to the Hoppers because one of their main focuses is education. Two coordinators secured and managed each of the two venues. Logistics such as water, shade, spent grains, and fire safety were important.

“It’s important to iron out who brings what,” said Dirk Karrenbauer, site coordinator. So, the club used an online Google signup sheet to secure ice-cold drinking water, spare equipment, sanitizer, canopies, and tables. “Face-to-face [coordination] with the site host to do a walk-through was key to success,” according to Chris McKenzie, site coordinator.

“There’s a lot that goes into this: site selection, traffic patterns, load/unload, hot chill water disposal, shelter,” he says. “Ideally, one or two people would co-brew, or not brew at all, to answer questions and talk through the process with interested visitors and bystanders. Whoever shows up will witness a variety of beers brewed on a wide range of equipment, so this makes a good opportunity to speak to the ability to tailor the hobby to any taste preference or depth of complexity that the new homebrewer wants to dive in.” 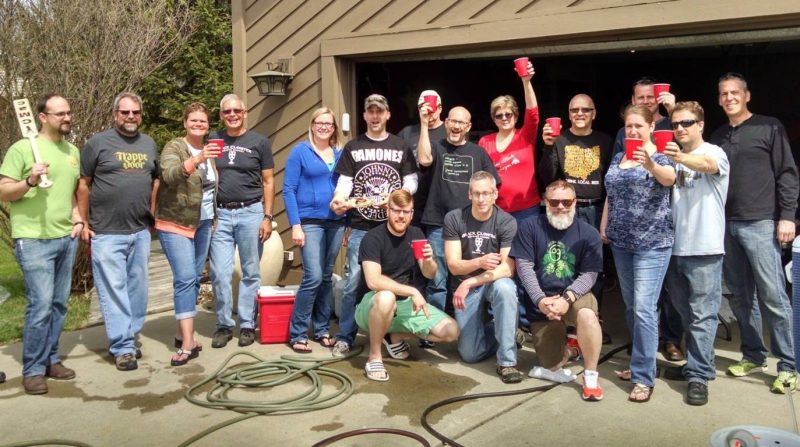 The Hoppers kicked off planning with a meeting in early March 2016, and press releases and posters were distributed. Social media outreach included five other local homebrew clubs. Richard Kenny, owner of one venue, Forest View Lanes, remarked, “I thought it was great! So many people there participating, and everyone was willing to help anyone that needed advice, tools, equipment, or anything. For someone that never brewed a beer, lots of knowledge in one place.” Richard is already on board with plans to host the club again in 2017.

The Hoppers partnered with local homebrew supply shop Titgemeier’s Feed & Garden Center to offer a discount on the club’s Big Brew recipe; a double IPA named “Hopper Mojo”. Titgemeier’s also ran a special 10% off on all homebrew equipment kits during the entire event, and flyers were on display at all sites. An event flyer was also created and posted at the venues and surrounding stores where craft beer is sold.

Because the Toledo area is so large and people’s schedules are very tight that time of year, the Hoppers realized early on that a multi-site event that also recognized solo batches brewed during the week of Big Brew could build a lot of involvement. The AHA was consulted on counting these batches in the 2016 Big Brew statistics, and agreed to include them.

This coming year, the Frogtown Hoppers plan to build on their success by incorporating a charitable aspect. Community outreach is valuable to us. We are looking for ways to help the people around us. We took what we learned last spring and turned it into a very successful month-long charity drive for Learn to Homebrew Day last fall. We try to use what we learn. It’s a great feeling giving back. We’re not so much goal-oriented, but huge turnout is a kick, and if we can couple that with doing something good for those around us, so much the better.