Dustin Wandtke, vice president of the Brewers of Paradise homebrew club, was getting his daughter ready for school. Having lived in Paradise, Calif., for nearly two decades, his routine had become familiar and welcome. On the morning of November 8, 2018, his daughter pointed to the sky and said, “Look at the pretty sunrise.”

“That’s not a sunrise,” he replied, and immediately did what all Paradise residents had trained for. Dustin kept his daughter calm, packed the essentials, took a quick video of the homebrewery in his garage, and got the hell out.

A Community Comes Together

California is popularly identified with palm trees and beaches, but we have far more mountains, valleys, and forests than many realize. Paradise, a town of about 26,000, lies in the foothills of the Sierra Nevada mountains that give their name to the famous brewery in nearby Chico. Surrounded by towering pines, granite boulders, and steep inclines, it’s a popular getaway for Chicoans.

Northern Californians are proud but welcoming. We work hard, we play hard, and we will give you the shirt off our backs if you need it more than we do. After the devastation of the Camp Fire, Secret Trail Brewing Company, the brewery I work at in Chico, committed to producing 15 barrels of Resilience IPA in collaboration with our neighbors at Sierra Nevada Brewing Company. But we wanted to do more. So, one afternoon we sat down and got to know the Brewers of Paradise homebrew club.

Half of the club’s members lost everything in the Camp Fire. Homes, hydrometers, photo albums, fermenters, boats, and breweries, all up in flames. Club members estimate they collectively lost $20,000, although the things you can’t quantify cost the most.

Before the fire, Dustin Wandtke’s garage had become a meeting place. His neighbor and fellow club member Mark Kellogg would walk there from down the street to brew with Dustin and his daughter. Mark’s backyard bar, a tribute to the bar his grandfather owned in Paradise, had become a sanctuary and homebrew quality assurance (sampling) lab.

Jim York, a longtime club member, lost the three-barrel nano system he had planned to deploy in a new Paradise brewpub. When he reached out to Charlie Barrett, Secret Trail’s founder and brewmaster, about brewing a collaboration beer, there was only one answer. After meeting with the club’s members, we decided to brew a strong Scotch ale and donate some of the proceeds to victims of the Camp Fire. 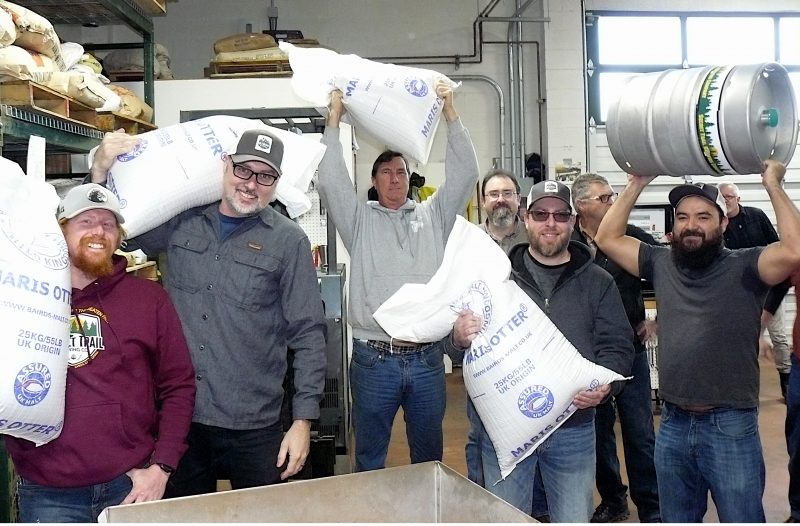 Charlie sat at his brew desk and scribbled notes in the fermentation log at 5:30 a.m. On a normal brew day, he would have arrived two hours later, after I had prepped the brewhouse. But this day was different. We were having company.

By 7:30, most of the members of Brewers of Paradise had gathered in our brewery to brew their first beer since the fire. The foundation (strike) water was set in the mash tun, and the “ALL CLEAR” was given. Rakes spun, the mill crushed, and the auger produced its familiar rhythmic racket.

Five feet from the mill sat half a pallet of Marris Otter. Nearby, a transparent tub held 99 pounds of specialty malt in which one could distinguish individual Lovibonds stacked up like layers in a geologic formation.

After the first bag had been crushed, Tim, the club president, asked how many bags we were going to add. When I answered with a resounding “All of ’em,” pocket knives swung open and club members started wrestling 55-pound bags of English malt. I was reminded how, in a little over a year of professional brewing, Charlie and I had become accustomed to the scale at which we produce beer commercially.

Charlie and I were homebrewers just like them only two years before, and the club members’ stories of loss resonated. Think for a second about your own homebrewery. How long has it taken to put together? How many recipes have you perfected over how many batches? How many trips to your local homebrew shop have you taken? How much has it all cost?

We couldn’t reproduce Dustin’s garage or Mark’s backyard bar, but we wanted to recapture lost moments. Experiences are built in a place, but they live on in hearts and memories. Old moments were rekindled as we chewed grain, sipped first runnings, and rubbed hops until our hands and noses turned green. You can homebrew alone, but like the finished product, it’s best enjoyed in good company.

The auger pushed crushed into the grist hydrator, and gears literal and figurative began to shift. No longer were we talking about the fire and its devastation, but about Chico’s water supply and its mineral composition. Where before we were looking at pictures of charred brewing supplies, we were now kicking the stainless tires on our 15-barrel brewhouse. As hot water and malted grain transformed into sugar, grave faces turned into smiling ones.

When the burner was flicked off and the whirlpool was underway, we talked about the beer and how we thought it would be perceived with its hint of smoked malt. It seemed too spirited a time to speak of devastation, but anyone who has been so greatly affected by fire always carries a touch of smoke.

As the fermenter filled with the precious wort we had spent seven hours preparing, beer orders were taken. Jim told us about the Nottingham ale yeast while, up on the ladder, Charlie pitched it and sealed the fermenter port with care. A successful brew day finished, we moved to the taproom to have another beer, talk about the day, and discuss the meaning behind this beer.

Conduct a 120 minute boil, following the boil additions listed in the ingredients. At the end of the boil, turn off the heat and add the whirlpool hops and allow to steep for 30 minutes. Chill beer to 65°F (18°C) and pitch yeast.

Even those with only passing knowledge of independent craft beer today know IPA is king. But when asked why the club chose to brew a strong Scotch ale (wee heavy) instead of an IPA, Chris replied that IPA has become so mainstream as to be forgettable. He believes the rich malt, subtle hops, viscous body, and smoky undertones of this beer will linger far longer in the minds and palates of those who sip it.

Good IPA is fleeting, with labels demanding that the customer “Drink Now” and “Drink Fresh.” Paradise Strong Scotch Ale is designed to stay with you for months, even years. As it ages, the smoky malt flavor will settle, and other elements will come into focus.

The smoke has settled over Paradise. The sun no longer blotted out, a bruised community can again see the road ahead. A decade or more will pass before most wounds heal; some may never heal. Still broken, still hurting, but hopeful and resilient, the Brewers of Paradise are a phoenix whose bright, brilliant feathers will always carry a subtle hint of smoke.

Visit the GoFundMe campaign to support Brewers of Paradise.