This article was originally published in the July/August 2016 issue of Zymurgy magazine in the World of Worts column. Join the American Homebrewers Association to gain access to the Zymurgy online archive.

Every one of my recipes has a story or reason behind its name. Thinking back to the 1970s and the homebrew classes I used to teach in Boulder, Colo., all of my recipe names were celebrations of our zany selves and the fun experiences we had as homebrewers. We were beer explorers, and the resources we had back then were few.

Books with recipes simply outlined formulations for pale ale, stout, porter, and so on, without the benefit of names to call them. Creative naming of beers was not part of beer culture yet, and even existing breweries of the time didn’t put much creative effort in naming their beers. Commercial beer was all about brand names, with Pilsener, bock, lager, or premium tagged onto the company name as an aside.

This is one of the Big Brew 2018 official recipes.

Add the malt extract, honey, and boiling hops to 1½ gallons (5.7 L) of water and boil for 60 minutes. Add Irish moss for the last 10 minutes of the boil. Add the finishing hops during the final 2 to 4 minutes of boiling. Strain, sparge, and transfer immediately to 2 gallons (7.5 L) of cold water in the fermenter. Top off with additional water to make 5 gallons (19 L). Add the yeast when wort is cool, and ferment to completion. Bottle when fermentation is complete.

The recipes for Goat Scrotum Ale and Rocky Raccoon’s Honey Lager published in my book, The Complete Joy of Homebrewing, changed all that. Rocky Raccoon’s Honey Lager became one of the most popular—perhaps the most popular—recipe in my book. The idea of adding honey was first introduced with this recipe, and professional brewers and most beer drinkers thought I was nuts to use honey in beer. And the name “Rocky Raccoon” seemed to strike a chord in more ways than one. 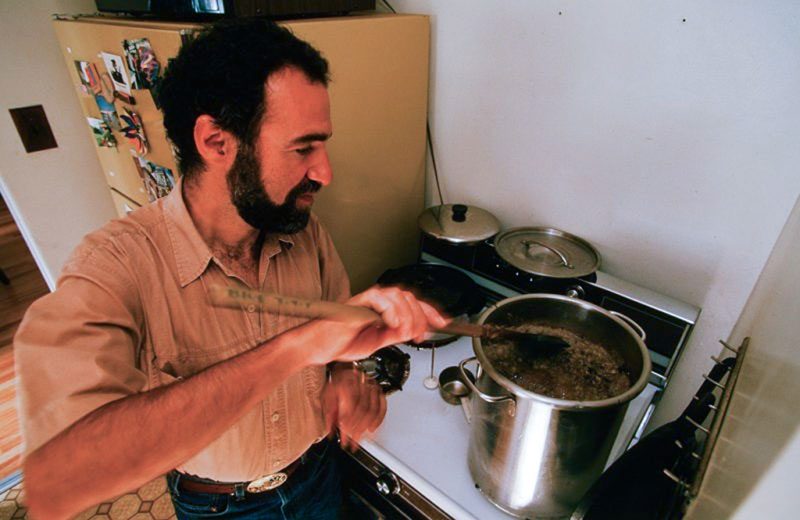 Charlie Papazian homebrewing in his kitchen in the 1990s. Photo credit: Jay Quadracci

In 1968, The Beatles cut their White Album (officially titled The Beatles). My parents happened to be taking a short vacation to England at the time of its release, so they brought the White Album home for me about two weeks before it was issued in the USA. At the age of 19, I was one of the first Americans to spin that vinyl and listen to the two-record set. The song “Rocky Raccoon,” to this day, is high in my humming repertoire. It is a classic. And so was my recipe for Rocky Raccoon’s Honey Lager. Hundreds of homebrewers have won awards in competitions for their own renditions of this beer.

The recipe in my recent fourth edition of The Complete Joy of Homebrewing is the original malt extract recipe, which I’ve reprinted here as it appears in the book. I’ve also developed what I imagine would be a good all-grain version, with a few notable revisions.

Enjoy this original game-changer one way or another. Let’s cut the shuck and jive and get on with the recipe.

Decoding the Beer Recipe for Beginners