This week in Pimp My System we are checking out Andrew Tingler’s pimped out mash tun. Andrew’s wife got him a 10 gallon Blichmann kettle last Christmas that was already fairly pimpin’ to begin with (he must have been a good boy that year). It had all the usual high quality adornments such as a sight glass, thermometer, and ball valve, but Andrew noticed that the temperature was pretty wavy when compared to the cooler he had been mashing in. He first addressed the problem as many home brewers do by wrapping the kettle in that silver insulation and duct tape. While that worked adequately, he quickly realized it did not do the kettle justice.

Andrew looked to his local micro- and nanobreweries to see how they handled their heat loss in the mash tun. He found that instead of slapping some ugly insulation on with duct tape they attached wood to the outside of their mash tuns. In true DIY form Andrew decided that he shouldn’t have to settle either. The only problem was that he did not have any real woodworking tools. No band saw, no mitre saw, not even a circular saw. What he did have was a hack saw and a drill. Oh yeah, and some sand paper. After cutting 30 or 40 planks by hand he sanded them down and applied some water sealant and oil based paint. Between all the work and chasing away his 2 year-old son who constantly wanted to “help” the process took a few weeks. After that stage he went into full-on pimp mode and started customizing the outside of the planks. Andrew affixed the wood by screwing a steel band around the top and bottom and then hand-painted a crimson fleur-de-lis. After a bit of constructive criticism (literally) on the AHA Forum he realized that using copper bands instead of steel would add boat-loads of class. Good judgment restrained him from overpimping and using diamonds. Finding copper bands involves more than a trip to Home Depot, though, and his next challenge was in locating a supplier. 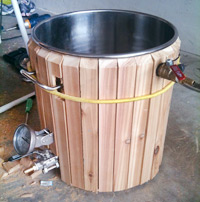 Andrew chose to use cedar, and says that it doesn’t add too much weight. He estimates it is about the weight of a keggle. He does use a propane burner underneath, but does so very sparingly since the water from his HLT is generally around 160 degrees Fahrenheit. During his first trial run he did need to apply the burner a few times since he was brewing in ambient air temps of around 50 degrees. The cedar wasn’t damaged by this heat addition. The finished product looks really slick and is definitely the centerpiece of his brewing setup. The rest of his system consists of a tried-and-true gravity fed 10 gallon cooler as the HLT and a 7.5 gallon stainless steel brew kettle. Although, rumor has that Santa might be rewarding him again this Christmas with another 10 gallon Blichmann kettle (other spouses take note). Andrew’s system is truly pimping and we thank you for sharing it with us.