Before getting into the technical aspects of Chris’ brewing trailer it is important to understand why and what the trailer was built for. The goal was to brew the historic Allsopp’s ale from an 1852 recipe, 2000 miles away from home in the Canadian arctic, while riding a motorcycle and filming a documentary along the way. The journey was to be carried out by seven people via three motorcycles, two support vehicles, and the mobile Arctic Brewery. The brewing site was located where the Hudson Bay meets the James Bay, at the very end of the northern road in Quebec (the crew actually crossed into the Nunavat Territory which is considered part of the Arctic). Once there, the plan was to produce the wort in the cold and windy elements of the shoreline and then ferment the ale “in transit” all the way back to Pennsylvania. To do this, Chris built a system that produced just less than 40 gallons per brewing session (2 days of brewing) and created the “brewtiful”  trailer capable of keeping fermentation temperatures in the low 60’s for the entire journey back.

Because of the enormous challenge of fundraising, the entire system had to be constructed in a mere 6 days (funds for the equipment didn’t arrive until the last minute). First, a single tier brew stand was built out of 2″ Stainless steel and three 55 gallon drums were welded with the appropriate fittings as well as outfitted with the proper valves. The Arctic Brewery uses a recirculating mash system and batch sparging to simplify the brewing process (brewing in the arctic climate  presents enough challenges as it is).

Because of the limited space available in the trailer and the large footprint of the brewing set-up, the hot liquor tank and the mash tun are joined together on one stand and the boil kettle is placed on a separate stand. The HLT, mash tun and boil stand all fit together nicely when unpacked, but can easily be separated and packed into the trailer during transportation. The mobile brewery uses two 32 tip Jet type burners, one under the boil kettle and one under the HLT, and a smaller burner is used underneath the mash tun for maintaining mash temps.

Due to the lack of accessible electricity on the barren arctic coast, liquid propane and gasoline were used to power the system. A gas powered generator supplied the power for the small march pump, and the fuel for the burners was provided by liquid propane (four 20lbs tanks were on site). Automation was kept to a minimum to reduce the possibility of mechanical failure. All the burners were hand lit and the only on and off switch was for the pump.

The next set of challenges would arise from the need to safely transport and ferment the beer while traveling back to Pennsylvania. Since fermentation would take place in the trailer, maintaining proper temperature was a critical consideration for the health of the beer. Sloshing was another obvious concern since the beer would be situated in the trailer and would experience every bump, jolt, turn, and stop along the way.

The chosen fermentation vessels were two Blichmann 42 gallon conical fermenters, each afixed with a 12-volt glycol-chilling component. 1/4″ copper circuit soldered to sheet metal plates provided the outer cooling system for  the large fermenters. The fermenters were then bolted  to the floor of the trailer. The glycol cooling system used an electric pump to circulated the liquid through a cooler with a stainless steel coil positioned inside of it. Ice was added to the cooler and during the trip back the system maintained a reasonable level of insulation with a fairly low level of melting. The PIDs were connected to thermocouples in the fermenters to monitor the temperature. A fermentation temperature range was set (62-65 degrees) and the PIDs called for the pump to come on or off as needed. A low level grant was installed for adding glycol or purging air from the cooling system. The grant, by regulating the glycol level, kept the system running smoothly and well balanced.

To mitigate the sloshing that would inevitably occur on such a long road trip, two blow-off tubes were connected together with a tee and were directed into a stout five gallon Cornelius Keg. These slosh tubes were connected to the inlet valves of the fermenters, and the gas produced from fermentation was safely vented outside the trailer by another set of tubes. The fermenters were mounted directly over the axel of the trailer which evenly distributed the weight of the vessels and minimized the disturbance to the beer. After the trip, Chris reported that “honestly, after all the miles we drove, bumps we hit, and turns we made, I lost less than 1/2 gallon due to sloshing.”

Because the glycol pumps would need to be run at certain points and PID’s would need to continously monitor the temperature, a dependable power source had to be installed. The twelve volt power source came from the Land Rover support truck battery that was charged continuously by the alternator. It fed a 12 volt power inverter (the 1000w Black and Decker unit), plus the 12 volt water/glycol pump and two 12 volt PIDs to monitor fermentation temps. The power inverter also powered a 120-volt trickle charger, which charged a deep cell Marine battery. During  the day while the group traveled, the Land Rover powered the demand for the pump and PID’s. When the group stopped for the night, power was converted from the deep cell battery to keep the pump running overnight. The battery would run down over night, but it was recharged during the day. What was the final verdict on the dual power system?  “I was amazed by how well this system worked. The pump barely ran at first (we were in a colder climate), but by the time it was in the mid 80’s, the beer stayed in the low 60’s as planned” said Chris.

All of the planning and preparation ended up paying off for the brewing adventurers, and even though they encountered 40 mph winds, 40 degree temperatures, and almost 5 inches of rain, they succeeded in brewing this historic beer. The transportation of the beer back home had its fair share of complications, not due to mechanical failure or break-downs but rather the complications that arise when you try and cross the U.S.-Canada Border with large stainless steel tanks, pumps, and batteries. “There were no troubles crossing the border into Canada but coming back was a little more “interesting”. As far as I know, no one has ever done anything like this before and the look of the US customs people when I crossed the border was worth the whole trip. A team of Hazmat guys inspected the trailer and detained us for nearly two hours while they tried to figure out why anyone in their right mind would do something like this” reports Chris. So after weather, wilderness, 3,000 miles of driving, and even the United States Border Patrol, the Arctic Brewery made it home with almost 70 gallons of the re-created Allsopp’s Ale. 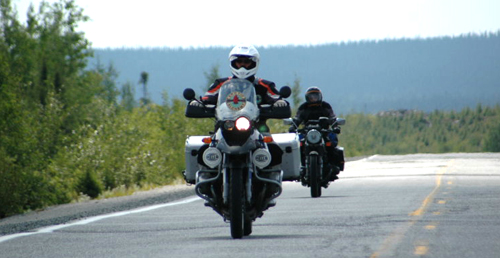