As a homebrewer, if you’ve found yourself with a surplus of homegrown apples, chances are you’ve considered fermenting your own cider. Cider making resources generally introduce the pulp and press technique for extracting juice—a process involving equipment used to grind up raw apples and press the resulting pulp for juice.

For many aspiring cider makers, the cumbersome and pricey equipment is enough to declare defeat, but Nevin Stewart would advise you otherwise.

Over the years, Stewart saw his neighbor hauling bushels of apples from a backyard tree to the compost pile, although a better option than the garbage, he knew they could be used in a better way. In 2011, with an exceptionally large crop of apples—over 661 pounds—Stewart was inspired to transform the unknown variety of culinary apples into a tasty, dry cider.

The pulp and press technique was out of the question, as the money and space required for the necessary equipment exceeded what he and his neighborhood chums were willing to contribute.

“The cost and size of a good pulp and press kit is an entry barrier for many,” said Stewart. With a doctorate in chemistry and experience developing innovative products and processes for British Petroleum, he set out to develop a way to produce delicious cider at home without breaking the bank. Cider is simple, much like wine. It consists primarily of the fermentable juice from whole fruit and the yeast that transforms sugars into alcohol and CO2. As mentioned, the biggest barrier for hobby cider makers is the equipment, so an alternative means of extracting juice was the biggest hurdle.

Initially, Stewart tried a second-hand juicer designed for processing seedless fruit slices. Clear, delicious apple juice was in fact produced, but it came at a cost.

“In the first attempt, it took three of us three hours to produce three demijohns [1.18 gallons each] full of juice. With 600 pounds of apples available, this approach was just not practicable,” reflects Stewart.

A plethora of juicers were tested, and the ideal appliance could quickly process whole apples with seeds, while still producing relatively clear apple juice. Most whole-fruit processors will suffice, and a thorough cleaning will keep it running like new throughout the cider making season.

The Juice is Worth the Squeeze

Most whole fruit juicers tested would produce about 1.18 gallons of fresh cider from about 17.6 pounds of apples—a 60-65% juice yield by weight.

The whole fruit processors sped up the process significantly, eliminating the need to prepare the apples beyond a thorough cleaning. On average, one person on a high power (1200W+) whole fruit juicer can produce 8.5 gallons of fresh apple juice an hour.

On a small scale—a few tens of gallons—the juice and strain method can yield considerably higher volumes of juice compared to the usual hand cranked pulp and press technique. 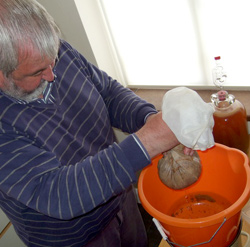 The juice that is produced from the juicer is fed through tubing into a bucket rigged with filtration. A fine-mesh bag layers a smaller bucket with holes drilled in the bottom to catch the solids while allowing the juice to collect in the large bucket.

As a means of speeding up this process and maximizing yield, Stewart is considering yet another bucket that would sit atop the pulp fines in the mesh bag, pressing the liquid out with the use of pressure instead of relying solely on gravity.

Because this method involves processing apples with a juicer and then straining to produce clear, solid-free juice, Stewart appropriately named his technique “juice and strain.”

Here is a list of the essentials for conducting juice and strain at home. The size of equipment will depend on the volume of cider you plan to make:

Juice and strain still has room to be refined, but the following steps will produce delicious apple juice that can be shared with all ages or fermented into a crystal clear, dry cider for the adult folk. Non-fermented juice can also be frozen and stored.

[Editor’s note: The following report is the summary of a research project that was funded …More