Think back to a time when you visited your favorite small, independent brewery. Perhaps you were consumed by how refreshing and crisp their beer tasted on a warm, sunny afternoon. Don’t you wish you could make beer this enjoyable?.

Turns out, you can easily make beer just like a pro right in your kitchen.

How to Start Making Beer

Almost every brewery you’ve visited started off with humble beginnings of someone making beer on their kitchen stove, learning as they followed an easy recipe on how to make beer.

As with cooking, you’ll need some common kitchen gadgets to help you along the way. You probably have almost everything you need already, but if you don’t, you can visit or order online from your local homebrew supply store to pick up supplies. This is a great time to purchase ingredients, too!

For your first batch, follow a simple recipe that will set you up for success. Aim small, miss small, right? We suggest starting with this Easy Amber Ale, which includes a step-by-step tutorial video.

HomebrewersAssociation.org also has a collection of members-only craft-beer clone recipes like Bell’s Brewery Two Hearted Ale and Allagash White to get you started. Brew your own version and see how it stacks up to the real thing!

Process to Make Your Own Beer

You have your equipment, recipe, and ingredients. Now it’s time to brew like the pros using the “all-grain” method, a process that utilizes grains instead of extracts. If you want a faster and simpler brewing process, start by brewing beer with extracts.

On brew day, you’ll follow the recipe step by step to make wort—not-yet-fermented beer. On an all-grain brew day, it all starts with the mash.

Mashing is the process of extracting sugars from the grain, which yeast will then ferment into alcohol. Mashing simply consists of steeping grain in water at a specific temperature for about an hour.

After the mash, the sugary liquid is drained from the mashing vessel into the boil pot, leaving the grain behind. The used grain, called spent grain, can be used to make other things like dog treats and pizza dough!

Once in the pot, the sweet wort is brought to a boil, and hops (and other ingredient) are added as noted in the recipe. Tip: Hop additions are typically listed in minutes before the end of the boil. So, a 60-minute hop addition during a 60-minute boil would be added right when boiling starts. A 5-minute addition is added 5 minutes before you turn off the heat.

After boiling, cool the wort down to between 70°F and 75°F (21–24°C) using an ice bath or a purpose-built chiller. The cool word is then moved to a fermentation bucket or vessel where yeast is added The fermentation stage should begin within 24 hours and be finished and ready to bottle or keg after a few weeks. Foaming and bubbling in the fermenter is a great sign that your yeast is working hard! 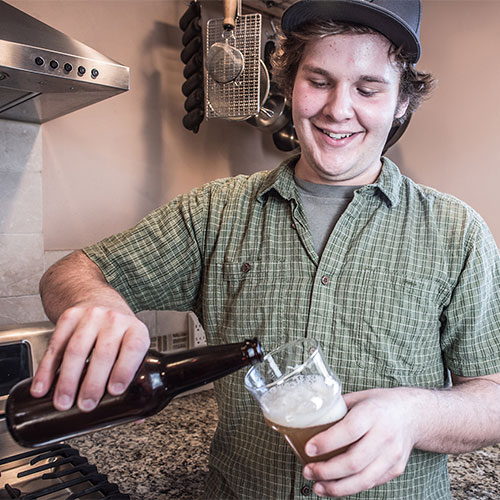 After you take a sip of your first homebrew, you’ll be hooked! One of the best parts of making beer at home having the control and creativity to brew and drink what you like. You are the master of your domain and sole decision maker, just like a brewmaster in a commercial brewery.

When you start planning your next brew day, head over to HomebrewersAssociation.org to find master tips to up your game from breweries like Maine Beer Co. and Dogfish Head.

John Moorhead is competition manager of the American Homebrewers Association. To learn more about the AHA and the benefits of membership, visit HomebrewersAssociation.org.

The Simple Steps to Make Beer

Decoding the Beer Recipe for Beginners