Polish Mead Tips from the 2018 Meadmaker of the Year

Michael Wilcox was gracious enough to share detailed notes on his best-of-show Ode to Jadwiga mead with Zymurgy. This the full version of the abridged notes that appear in the September/October 2018 issue of Zymurgy magazine, where you’ll also find his award-winning recipe.

It would not be a stretch to say this mead is most of the reason I make mead, wine, beer, and cider.

Around 14 years ago my future wife and I first tasted Apis Poltorak Jadwiga, a sweet, rich Polish mead that includes raspberries, rose hips, 16% ABV, and several years of aging in barrels. There are sherry and raisin characters, muted raspberry, and a body that could be called opulent without exaggeration. A true nectar of the gods.

I surprised Pam with a second bottle when we got engaged. At that time, she wondered aloud if I could make it. Around then I was just researching making some wine and hadn’t started beer or cider yet. After the laughter died down I took it seriously and extensively researched how to make something similar.

Polish mead styles are differentiated by how much honey they use. At the top are Dwojniak, featuring one part honey to one part water, and Poltorak, with an incredible two parts honey to one part water. It eventually became apparent that I could not accurately make a Poltorak, at least not without significant amounts of fortifying. (Commercial examples of these two styles can legally be fortified.) However, I thought I could make something at the upper end of Dwojniak and, after experimentation with white sugar and various yeasts, confirmed it.

[LEARN the basics of making mead at home]

After a couple years I was ready to try it. It isn’t a clone, but Jadwiga was the biggest inspiration. Compared to Jadwiga, what I entered is less sweet and more drinkable, features significantly more raspberry, and has no rose hips. It is approximately nine years old, several batches blended together, and micro-oxidation has become a big part of the flavor profile. If I ever truly master it, I may write something up on intentional oxidation. The word oxidation is often thought of as negative, however it is a big part of flavor development.

Honey varies by batch, but I generally used about 70% acacia honey, 15% local wildflower, and 15% buckwheat. You want honey from the western buckwheat species. This is not to be confused with eastern buckwheat that’s sometimes grown in the West. If you have eastern buckwheat with an aroma that could politely be called “enteric,” don’t use it. With a very good quality buckwheat honey without metallic or horse notes, I might go as high as 30 percent of the total.

I use a fruit steamer for the fruit. Cooking the juice a bit bothers some purists, and in some pale and delicate fruit, it will create undesired amounts of cooked character. But remember, this is going to experience a lot of aging and oxidation. A fresh raspberry character isn’t what we’re looking for anyway. It seems like a ton of raspberry, but it will lessen over the years.

Please don’t look at the original gravity, mix up something with 200+ gravity points, and toss in some yeast. It’s not going to ferment, or at least not well. These big meads generally start with a 1:2 honey-to-water ratio, with the rest of the honey added during or after fermentation. Do the math and you realize that for Poltorak, you’re only starting with one quarter of the honey in the fermenter, with three quarters added later. Step feeding is a good idea, and I always add some honey to big meads in this manner. Adequately prepping your yeast for a monumental task is essential and can be a two-day process of slowly introducing the must to the rehydrated starter—don’t rush it. Healthy yeast is critical.

Alcohol-tolerant yeast is important here. Understand that published alcohol limits are given under ideal conditions: just because a yeast is supposed to be able to ferment to 18% ABV doesn’t mean it will do so in a hostile environment. Also, yeast is sometimes known to go beyond published limits. For the yeast mentioned in the recipe, I can routinely get above 19% ABV, which we really want here.

I’ve used yeasts like K1V, D47, VR5, several supposedly highly alcohol-tolerant strains, and even flor sherry. I know some of you will look at high alcohol tolerance and see distillers yeast above 20%, but I’ve not been able to approach those published levels as a hobbyist and was not happy with the flavor profile. My final product features a blend. The yeast I recommended in the recipe represents a simplification, a reasonably widely available strain that I believe you have the best chance to succeed with. Fermentation takes place in my basement in the 60s °F (upper teens °C).

I recommend staggered nutrient additions: Fermaid O and half teaspoon or so potassium bicarbonate. You’ll likely need more of the latter with all that raspberry acidity to keep it happy. I don’t stir after the first several days, I never add nutrients above 9% ABV, and I am not in a hurry.

I want at least 15% in the final product. Why do we need incredibly high alcohol tolerance—preferably 19% or more—on something that is only 15%? Because we are diluting the alcohol with any honey added after fermentation. If you ferment half a gallon of honey and a gallon of water to 16% and then add in another half-gallon of honey after fermentation, your alcohol is now only 12%. That’s not high enough in my opinion because oxidation is a funny thing. 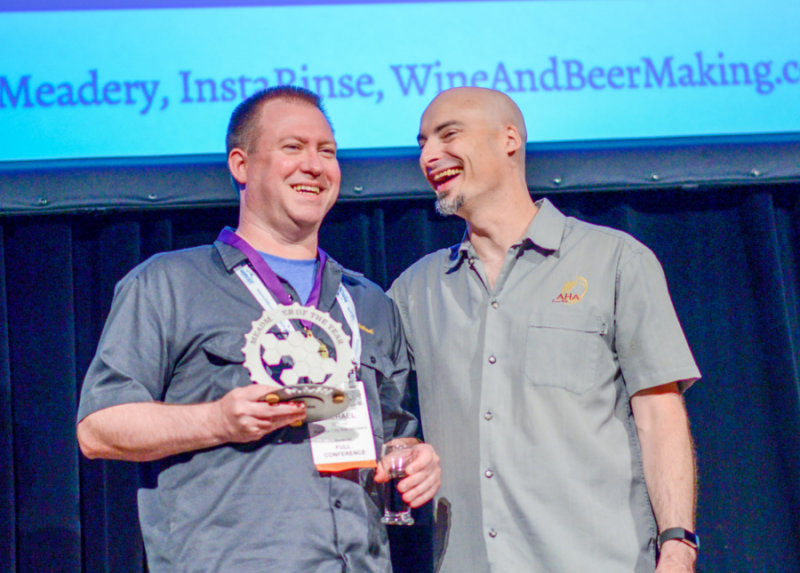 We want oxidation, but not too much, too fast. In my experience, sack strength helps protect things from happening too fast. So, we leave some head space, but not a half-empty carboy. We leave out sulfite in huge meads, but not when making a low-alcohol style. When you’re happy with it, go ahead and sulfite it. Raspberries add a ton of acidity, which also helps keep oxidation from happening too fast. The one-note citric acid bite of raspberry will smooth with time.

Individual micro-oxidation flavor development changes are tiny but will eventually become a significant part of the flavor. Leaving your mead on a 71B cake until it tastes like autolyzed yeast is not the same thing, so do it slowly. Blend with other batches for complexity. If you want to experiment, caramelize a small percentage of the honey to help reinforce the aged flavor. This is something I started doing after some experiments with intentionally oxidizing Madeira with heat, but note I didn’t say burn the honey. Plan to need at least three years, preferably five or more.

Wood will depend on how much mead you’re making and how long you’re waiting. Having an older barrel with some character still in it where you can forget about this mead for years is best. If not, things like chunks or spirals work fine. Just be prepared to pull them out, and especially to let things age/meld together. Remember that small batches can end up over-oaked quickly. You’re not looking for a big, raw, recently added wood character. It should seem aged. Mine is a mix of French oak at various toast levels, with a lot of it second use—let another batch take the initial sharper characters and then transfer to your Polish mead to leave alone for a long time without fear of over-oaking. You can always add more oak later.

[BROWSE through our tried-and-true mead recipes]

It bothers me to fortify things used for competition. I believe the alcohol should come from my fermentation, not from a bottle. However, a token amount is not a big deal—think of the amount added to some big stouts when aged in a bourbon barrel. So, if you want to compete with this and can’t get to 15% ABV, I’d fortify up to 1 percent. It’s about protecting it during the aging process, not being a significant portion of the balance. If you don’t want to compete, fortify as much as you want, even to the point of making a true Poltorak, but I’m not going to be impressed as a judge by something where a significant percentage of alcohol came from fortification.

Don’t go into competitions expecting much. Most judges don’t know Polish styles, and even after extensive research, I only know a little. (Any Polish readers are welcome to send me more examples.) Requests from judges for more raspberry are common. After many years of aging, some judges may argue that it isn’t sack. Ignore it: like the mead, those judges will improve with time.

Be careful identifying your mead as “intentionally oxidized.” Some judges interpret this to mean “sherry” and seem to look for a more overt sherry-like aldehyde character of nuts and green apples. These are there, but they’re part of a bigger, complex whole, not nearly as high as most actual sherry.

I drink this at room temperature, and unlike many other long-term projects, I drink it at least weekly and rarely share it. It has flavors of aged raspberry; caramelized sugars; bits of molasses, raisins, and other dried fruit; fairly high acidity that’s mostly hidden by sweetness; and a big, decadent mouthfeel with tons of honey character and ever-present alcohol without being too hot. Of about 600 batches of stuff fermented, this is what I consider my best, and it is easily what I’m proudest of. Pam was a big fan, so if you do make this, raise a glass to her or anyone else who was taken from us too soon.

Michael Wilcox is the 2018 AHA Meadmaker of the Year. He lives in Wichita, Kan. and is a member of the Kansas City Bier Meisters.

Beer, mead, and wine have long been intertwined throughout history and involved in one of …More

Like brewing beer, making mead can be as simple or as complicated as you want …More

How to Make Mead

Homebrew Con isn’t just for beer lovers. With a multitude of educational sessions in the …More