Homebrewers have long been thought leaders when it comes to beer, so it makes sense that they would have their finger on the pulse of what is new, exciting, and upcoming in beer trends. Heck, they are probably the ones setting some of the trends. But is there a way to see the relationship between homebrewers and emerging trends in the wider beer marketplace?

To answer this question, I set out to analyze the data on entries in the National Homebrew Competition (NHC), the largest beer competition in the world. The competition receives thousands of entries from all 50 states (and DC) over nearly 30 style categories, and those entries presumably reflect the interests (or lack thereof) amongst some of the world’s most committed homebrewers.

To look at the ever-advancing abilities of homebrewers, I stepped back in the competition to 2011, when there just under 7,000 entries (6,906 to be exact). Next, I lined those entries up against market data from the IRI Group, which looks at the sales of different beer styles via scans at grocery stores, convenience stores, and other off-premise retail locations. Although the NHC and IRI categories don’t line up perfectly, using the sub-styles in each NHC category, I was able to line up entry data with the majority of the IRI data—the exceptions being seasonal and variety packs, which cut across styles.

Although the results aren’t perfect, there is some strong evidence that homebrewers (or, at least, NHC participants) are in fact trendsetters. Looking at the style data, the number of entries in 2011 has a positive correlation with that styles growth from 2011-2015. In other words, the more entries a category had, the more likely that style grew in the marketplace over the next four years. This positive correlation still holds even if we remove IPA, which saw tremendous market growth between 2011-2015. So, homebrewers interest do appear to align with future market movements. 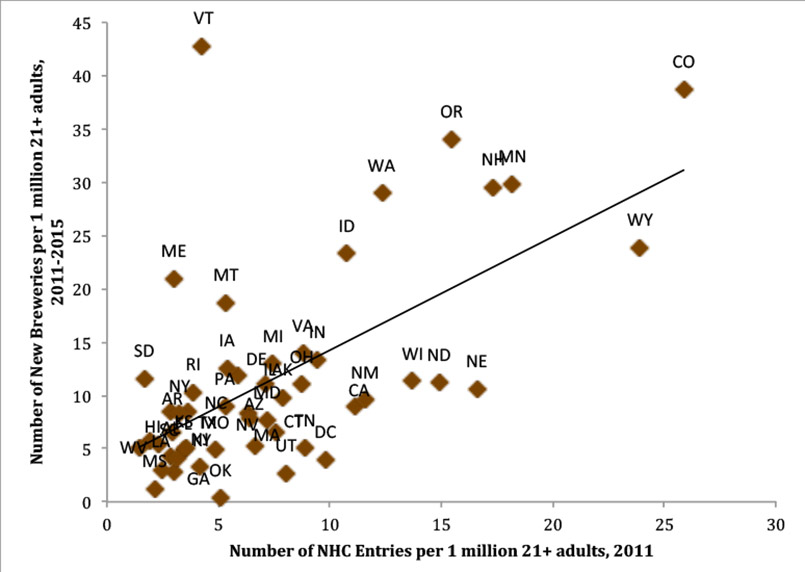 The relationship between NHC and brewery openings makes a lot of sense – committed homebrewers are likely to support small and independent breweries, as well as potentially open breweries themselves.

So to sum, NHC entries: