When Jared Rowley was suckered into elected to operate the club merchandise program for San Diego’s Quality Ale and Fermentation Fraternity (QUAFF) homebrew club, he was given dozens of plastic bins with outdated T-shirts ranging from XS to XXXL and no mechanism for tracking inventory. Now, almost two years later, club meetings are buzzing with QUAFF members who are delighted to find out what new items will be available for them to purchase that month.

Jared’s official position within the club, according to his nametag, is simply “Swag.” And that’s exactly what he does. Jared makes sure that QUAFF members always have a new and exciting swag item to bring home.

“It’s a fun outlet for me. It’s way different than what I normally do for work. There’s no one-size-fits-all merchandise program for homebrew clubs, but hopefully QUAFF’s way of doing things will help inspire some other clubs who are struggling with their merchandise.”

Set Up an Online Store

The QUAFF online merchandise store costs nothing for the club to operate and lets club members order custom sizes, eliminating the need for Jared to haul unnecessary inventory to and from meetings. It’s all done through local screen-printing company Next Day Printed Tees.

“We keep the margins low, about 25 percent above the wholesale cost. We could charge more, but the goal is to have our members wearing our club merchandise, not to make a huge profit off of them,” said Jared, “Even so, our net sales from merchandise were about $700 in 2018, which allowed us to pay for repairs to our club bar, among other things.”

Next Day Tees offers two shipping options for QUAFF members: home delivery (which incurs an additional shipping fee) or meeting pickup. Offering home delivery of club swag is a great way for people who have moved away from the area to stay connected to the club.

“The Next Day rep is a QUAFF member. I have a beer with him about once a month to get the stuff that people ordered for pickup, and I bring it with me to the next meeting.” 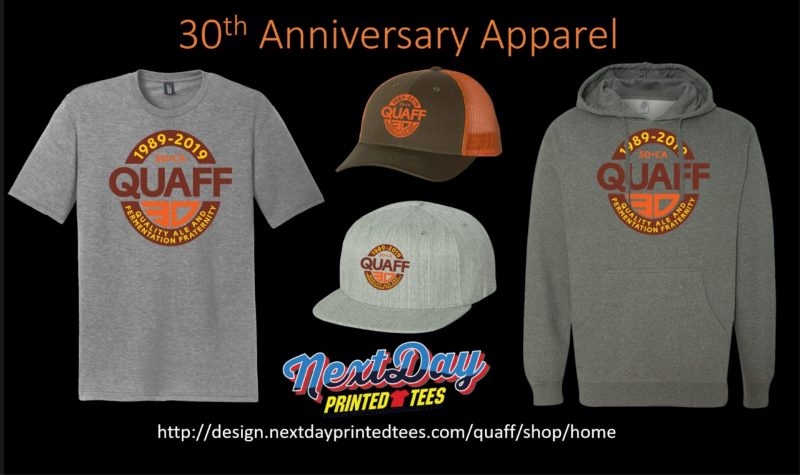 Though the online store allows QUAFF members to custom order apparel, Jared still brings limited-run items such as tasting glasses and stickers to sell on-site at the meetings. Payments are collected through a Square credit card processor that links to the same bank account that club membership dues are deposited into.

Jared meets about once per month for a beer with the head of Hoppy Beer Gear, Joey Jubran, who shows him some of the newest items they have available, such as stickers and bottle openers. Jared maintains an accurate inventory as he sells the newest items at the next meeting.

“This is a big thing. It seems obvious, but be sure to keep an accurate inventory and track your sales. When I was first given this role within the club, there was no inventory, so I took stock of everything and created a sales sheet.”

Jared is still trying to unload the more than 300 shirts from the club’s Quafftoberfest celebration, even though he still sells five to ten per year. When he took over the position, the club’s board of directors was hesitant to buy anything new since they were still sitting on so much of that inventory for so long.

Jared convinced the board to start small by purchasing 48 wooden coasters with the club logo and a bottle opener on the bottom. They sold out within the first 30 minutes at the next club meeting.

“The coasters were great because it was a low-cost item, and it proved to the board that our members wanted new stuff. I was able to expand into more items after that, but I still keep the order quantities small so that I can continuously have something new… Having something new to offer every month also gives us a reason to post something to the club’s social media pages and announce in the newsletter.” 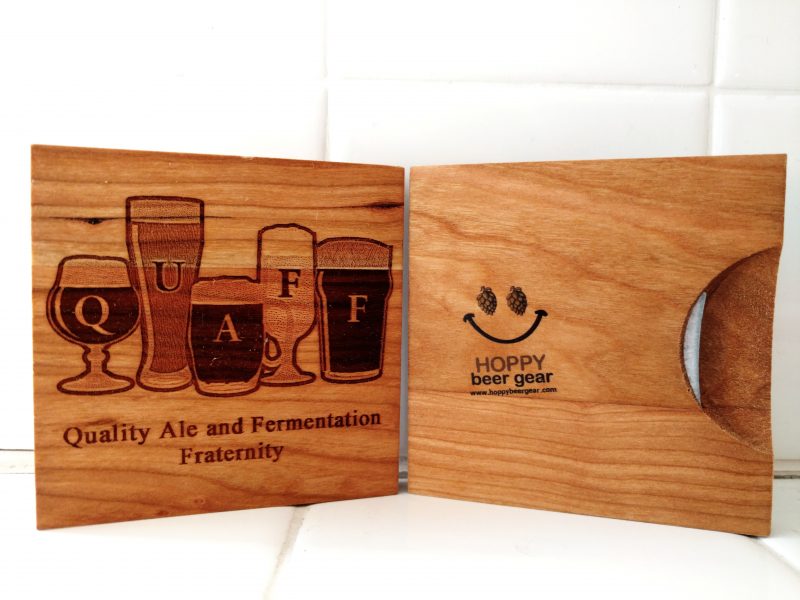 QUAFF’s logo presented a unique challenge: the design’s five colors made it difficult to control the cost of screen printing. Usually, more colors means more costs. Instead of printing in color, Jared decided to have the logo etched in wood on club tap handles, which helped him control the high cost of printing five colors.

However, since the QUAFF logo was designed to be printed horizontally, it would not fit onto the tap handles. Jared redesigned the logo to have several different versions, and the one that was formatted to fit vertically on tap handles has been reused on several merchandise items since. He also designed a square logo that has been used on bottle openers and tasting glasses.

“Having three or four different versions of the logo really opened the door for even more customization. We were no longer forced into a certain type of merchandise due to the shape.”

To commemorate QUAFF’s 30th anniversary in 2019, the club held a design contest for a custom anniversary logo. Jared received ten logo submissions, and club members voted for their favorites. The winning design was announced at the holiday party last December and has been featured on all of the club’s merchandise this year.