On June 30, 2018, during Homebrew Con in Portland, Ore., the Oregon Brew Crew (OBC) were announced as the 2018 Radegast Club of the Year Award recipients. The Portland-based homebrew club rushed the Homebrew Con stage to accept their award, including a $1,000 prize to be split between club endeavors and a charitable donation.

Now in its fifth year, the Radegast Club of the Year Award—named for the Slavic god of beer and hospitality—recognizes a homebrew club that goes above and beyond to not only promote the hobby of homebrewing, but use that love of beer and brewing to improve their great local community. Past recipients have included Heart of the Valley Homebrewers (2017), The Hogtown Brewers (2016), Maltose Falcons (2015), and Carolina BrewMasters (2014).

”It is an incredible honor to serve on the board of an organization that makes such an impact in our community, and we are grateful to the American Homebrewers Association for recognizing the Oregon Brew Crew as this year’s Radegast Club of the Year,” said OBC education chair, Alex Brehm. “Since our club’s inception, we have sought to use our hobby not only as a means of passing time, but as a way to promote community, spark meaningful conversations, and raise funds for charities and student scholarships. Awards like these aren’t the reason that we do what we do… but man it’s a nice affirmation.”

The OBC’s Contribution to Community

The following is an excerpt from the Oregon Brew Crew’s proposal to be considered for the 2018 Radegast Club of the Year Award. For more information on this award, visit the Club Connection section of HomebrewersAssociation.org

The Oregon Brew Crew is an esteemed organization in the Pacific Northwest. As board members of this unique nonprofit organization, we get to witness firsthand the pride, joy, and accomplishment of varied individuals who come from all parts of the country to seek out knowledge, friendship, and great beer, cider, and mead. Our club has all of that in spades. 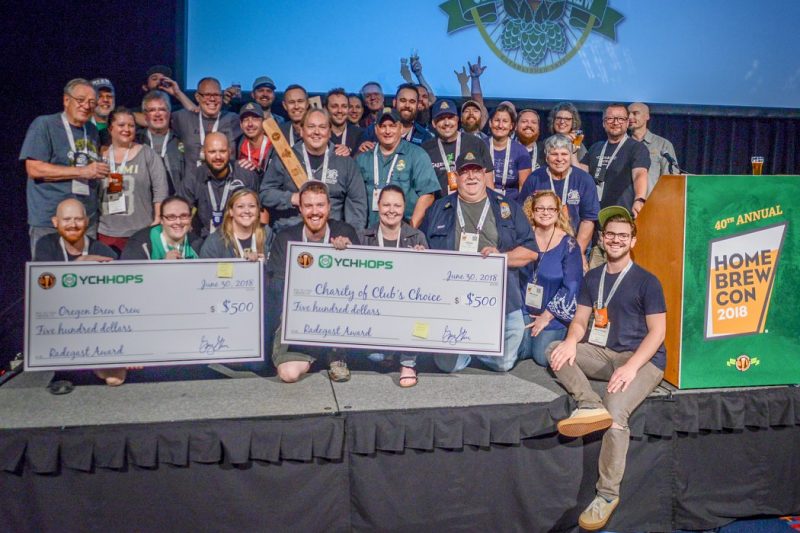 Members of the Oregon Brew Crew accept the Radegast Club of the Year Award during Homebrew Con 2018 in Portland, Ore.

While it may be easy to point to our storied history and legendary founding members, we would like to focus on the people and the present. With over 300 active members and deep ties to the Oregon brewing community, we have the diversity and funding to pursue a myriad of homebrewing related topics, events, and partnerships. Our club supports and promotes all kinds of homebrewing related topics like BJCP style competitions (Fall Classic, Heart of Cascadia, SheBrew, and the Clean Water Challenge), making sizable donations to charities (Knight Cancer Research Center, Bottler’s Mausoleum, Oregon State University’s Fermentation Sciences Program, the Human Rights Campaign), and supporting several other public educational events related to homebrewing and craft beer.

Our monthly meetings always have an educational component in which we cover topics from malt and hops, to kegging and bottling, yeast management, water chemistry, and more. We also pair up our newer members with BJCP judges and professional brewers for one-on-one tastings and evaluation, providing feedback on how to improve their brewing skills. Local professional brewers (including many former and current members) are always excited to share their stories of opening breweries and pushing the envelope in many of the styles unique to our part of the world.

Over two dozen OBC members get to brew with local commercial breweries each year as club prizes or as part of the annual Willamette Week ProAm event. The OBC is able to underwrite a large portion of annual bus trips to visit remote breweries and learn new commercial brewing techniques, barrel maintenance, and explore the local styles of our region. Our members regularly support and judge competitions hosted by other clubs in Bend, Eugene, and Corvallis. The club is constantly seeking ways to bring the Oregon homebrewing community together, including the development of the Oregon State Homebrewer of the Year program (OSHBOTY), now jointly managed by members from multiple clubs, as well as our first ever three club group brewing and blending collaboration with Oregon State University. 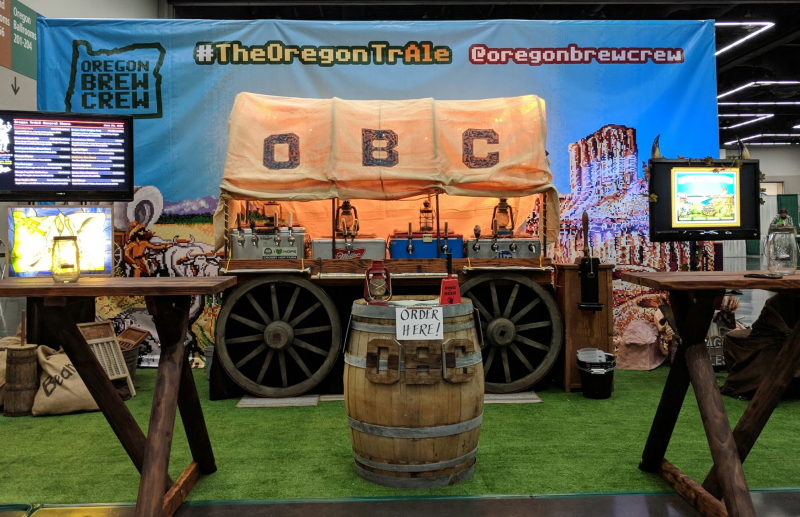 Our “Sustainable Water Challenge” (also known as the “Clean Water Challenge”) became internationally famous after its very first year. This competition promotes the use of clean, recycled wastewater to make great beer. This is an effort to raise awareness of the conservation and re-treatment of wastewater back into the potable drinking supply. Many national news outlets have covered this story, including the Wall Street Journal and dozens of TV news outlets.

The Oregon Brew Crew was founded in 1979, shortly after the nationwide legalization of homebrewing. The OBC traces its roots back to the beginnings of craft brewing in Oregon. Early homebrewers and members such as Kurt and Rob Widmer (Widmer Brothers), John Harris (Deschutes, Full Sail, Ecliptic), and others joined the pro ranks and opened some of the first craft breweries in Portland, Ore. This tradition continues with many other members who have gone pro including Alan Sprints (Hair of the Dog), Abram Goldman-Armstrong (Cider Riot), Alex Ganum (Upright Brewing), Michael Kora (Montavilla Brew Works), and Rick Strauss (Bent Shovel Brewing).

In 2014, we made a short video in an attempt to summarize what our club is about. We learned that it was impossible to give each aspect of our club its proper due within a short video. Still, we are proud and invite you to watch it on the homepage of our website.

Homebrew Shop of the Year Award