These new awards were a result of organizer Melissa McCann’s spending months visiting gatherings such as Homebrew Con to raise awareness of the competition, while pondering what QOB means to people. Knowing homebrewers who’d joined the brewing industry, she saw an unexplored link between women homebrewers and professional brewers.

So, she approached Laura Ulrich of Stone Brewing Co., president of the Pink Boots Society, a professional organization for women in the brewing industry. McCann asked why there isn’t “a farm league for women.” After all, many a pro brewer started learning at home in her kitchen. “I said, ‘So why isn’t there a competition that supports the future women of the industry?’ and Laura responded, ‘That’s a damn fine idea,’” recalled McCann.

That Pink Boots Society connection supercharged McCann’s quest for educational prizes at the Queen of Beer competition. She was able to secure a prize for the best-of-show winner: free enrollment in the Siebel Institute’s World Beer Academy Concise Course in Brewing Technology and the opportunity to brew a collaboration with Drake’s Brewing Co. in the San Francisco Bay Area. In addition, each competition entrant could submit an essay for a chance to win a short brewing course from the University of California, Davis.

“Homebrewing has, as we all know, declined over the last several years, and we obviously want to see it revitalize,” he said. “It’s a primary mission of BSG to find ways to not only support competitions, but also support diversity in competition.”

The idea for the QOB competition was born in 1993 at a beer festival in Nevada City, Calif., as Zangari swapped tales with a woman from a different homebrew club. Each had served her own beers, only to get compliments about “her husband’s brewing” and each had tired of repeating, “No, I brewed that.”

Together they dreamed up a women-only homebrew competition called Queen of Beer. “Our homebrew club [HAZE] in Placerville was pretty much an even mix of men and women, and so it was a family thing,” Zangari said. “Everybody brewed.”  And her own small-town California club wanted to make it a reality.

When starting, HAZE ignored pushback from women who preferred competing with men and men who objected to being excluded from any homebrew competition. Then, when the club submitted QOB to the list, they were denied because it was too exclusive. Zangari pointed out a sanctioned competition for brewers with hearing impairments. Why not women?

“If you have more women brewers, you’ll have more brewers in general,” she explained. “You’ll have more entries and competitors in all the competitions.” The following year, QOB was sanctioned for April 1994. 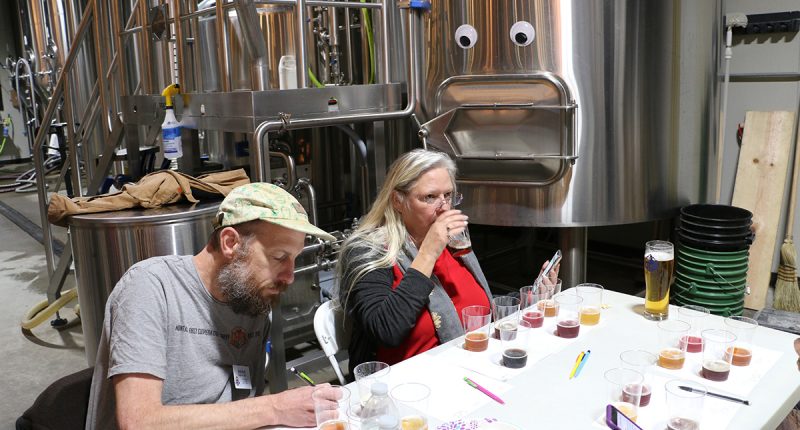 A surprised tank looks on as Queen of Beer entries are evaluated by Bob Hall (left) and Beth Zangari.

More than 25 years later, Zangari aspires to make QOB a “big draw” competition that provides a nurturing environment for learning. Mentoring new judges—of any gender—has always been part of QOB.

For the December competition, Annie Johnson, former QOB champ and former AHA Homebrewer of the Year, returned to judge and to bestow the crown. Johnson, who now works in the homebrewing equipment industry, remembers QOB as one of the forces that made her serious about brewing.

“You can’t beat the title,” she said. “You’re the Queen of Beer, undisputed, if you win this competition!”

Jen Jordan, brewer at Laughing Monk Brewing in San Francisco, came to judge and to represent the board of the Pink Boots Society. She, too, homebrewed before quitting her career as a schoolteacher for a brewing job. Judging provided a chance to touch base with women from breweries around the region.

While the judges evaluated 120 entries at Fort Rock Brewing, coordinator Joanna Arismendi surveyed the room. “I’m always one of the 10% of women you see at beer competitions,” she smiled. At the 2019 QOB, the ratio appeared to be closer to 33%. Most tables featured two Beer Judge Certification Program (BJCP)–trained judges and one industry judge. About 80% of the industry judges she seated were women.

Arismendi, a corporate trainer by trade, worked with McCann to solicit more women judges. They led “Judging 101” trainings for professional brewers interested in judging QOB. “Because they’re in the industry, they know how to taste beer,” Arismendi explained. “But [the next step] it’s getting that information on paper.”

Finally, at the best-of-show table, Zangari and three colleagues zeroed in on a refreshing pink lager that was neither sweet nor fruity. It finished with a compelling chestnut-like note. The description on the entry began “Kölsch-like light lager. Brewed with Ube (purple sweet potato)…”

The winner, Katherine Gooding, jumped when her name was announced. Gooding was crowned by past Queen of Beer Annie Johnson in a ceremony that included grins and happy tears.

“The Ubelicious Lager was inspired by my friend Norresa,” Gooding explained. “She wanted a beer made with Ube, purple sweet potato, to pay homage to her Filipino heritage and family tradition.”

Although Gooding prefers brewing German styles, she’s not shy about innovation. She hopes the scholarship will help further her technical brewing skills. “Then I can work on the creative, arty side of brewing by combining flavors and aromas and techniques to make exceptional beers,” she said.

Although Gooding has brewed Ubelicious twice, she said, “I look forward to making it with Drake’s Brewing to learn how they scale up the recipe for commercial sales—and hopefully take it to the GABF [Great American Beer Festival]. Gooding, an architectural photographer and the first female president of the Rat City Homebrewers Club in Seattle, isn’t going pro just yet but is eager to advance her education.

Johnson is stoked about QOB and other events for women homebrewers. In Portland, Ore., there’s SheBrew, a six-year-old women-only homebrew competition. “Somewhere down the road, their winners will have a brew-off,” she predicted, chuckling. 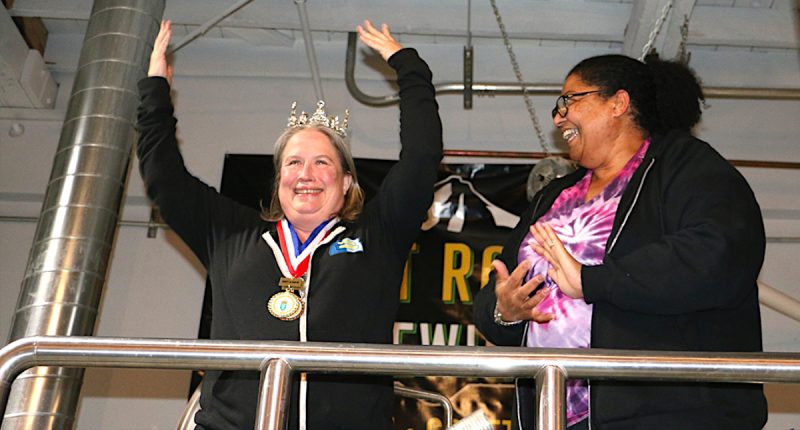 This award-winning beer recipe earned Katherine Gooding the Best of Show title in the 2019 Queen of Beer competition.

“My goal for the base beer was to make a light-colored lager that would allow the purple from the Ube to come through and still have a relatively clear beer with a white head,” said Gooding.

She used the brown-skinned variety of ube that’s purple inside. They were cut and roasted at 375°F (190°C) for 60 minutes and then slightly mashed (in the potato sense of the word) and rehydrated with boiling water so they would not absorb much liquid. The ube was added to the fermenter during active fermentation. She fined with gelatin but will filter next time for increased clarity. 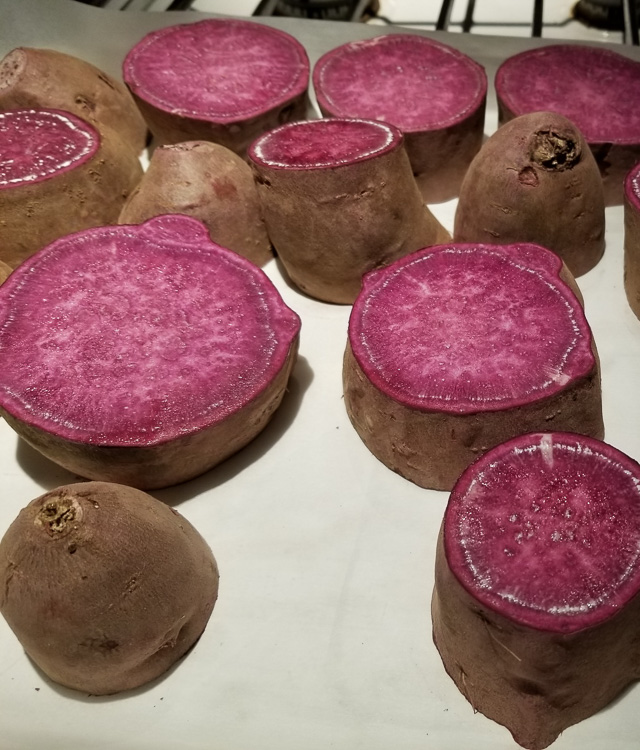 Ube—a species of yam with origins in the Asian tropics—is known for its vivid purple color, though they can sometimes be white!

Gail Ann Williams and Steve Shapiro are known for their free San Francisco Bay Area guide Beer By BART and their collaborative work for CraftBeer.com and other beer-friendly publications. Gail is a homebrewer (mostly of mixed-culture styles) and a BJCP Certified judge. Both have also judged in commercial competitions where more “industry judges”—including beer journalists—are seated.