[Above: Coachella Valley Homebrew Club member Will Campbell who passed away in a bicycle accident. Photo courtesy of Jennifer Novak.]

There are many stories of how a beer can transcend what’s in the glass. Often, it’s marketing aimed at convincing the consumer that what they drink stands for something more. Some claims are better than others. When it comes to homebrewing, craft beer, and community, few stories rival that of the Coachella Valley Homebrew Club and their Hazy IPA.

The Coachella Valley (aka Greater Palm Springs) has a homebrew club of fewer than 20 members. The club submitted one of its beers to the inaugural “Boil Rumble,” a nationwide competition co-sponsored by Melvin Brewing, The Brewing Network, and MoreBeer! To club members’ surprise, their entry advanced to the final six, which were judged at Homebrew Con 2019 in Providence, RI. Reaching the finals means they’ll brew a commercial batch at Melvin’s San Diego facility on August 17 and see it distributed across Southern California.

It’s a great moment for such a small club, albeit an achievement tinged with sadness. The celebrated beer was the final beer brewed by Will Campbell, a club member who was killed while riding his bicycle last December. Campbell was a 31-year-old sales manager at Vitamin World who, according to one friend, “lived a healthy lifestyle” and “rode 200-plus miles a week.” According to his GoFundMe page, “He died doing what he loved.”

The beer is a Southern Passion dry-hopped hazy IPA with citrus and stone fruit characters. “We tasted a couple of bottles at one of our meetings after Will passed,” club president Joshua Kunkle told me, “and everyone was floored by the quality.” The club held a fundraiser at La Quinta Brewing and brewed a commemorative beer at Coachella Valley Brewing. Around the same time, Jose Lopez heard about Boil Rumble and decided to enter Campbell’s beer.

“I’d never heard of a competition that was only open to clubs and thought it would be an awesome chance to promote ourselves,” said Lopez. “I knew the recipe had potential, as I had a few friends not into craft beer that liked it.”

Kunkle was surprised when they received the email notifying them that the beer had made the final six. He and Lopez both traveled to Homebrew Con for the final round.

Shared credit for the beer goes to Eric Arias, who was Campbell’s brewing partner. He had collaborated on subsequent batches for the Southern California Homebrew Festival and the Boil Rumble final. 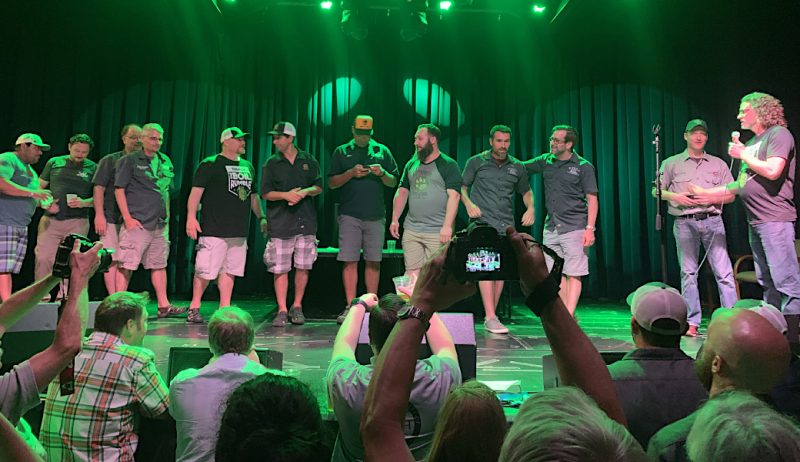 Members of the Coachella Valley Homebrew Club at the final round of the Boil Rumble competition. Photo courtesy of Melvin Brewing.

“We were both homebrewing when we met,” said Arias. “Will was always the life of the party. Even if it was just the two of us homebrewing, it was always a good time.”

He went on to describe Campbell as “easily the fittest brewer I know. He was a cyclist and could ride 40 miles in the morning and drink a flight as a recovery meal.” Will’s fitness, energy, compassion, and high spirits were recurring themes from all who shared their thoughts.

Will’s girlfriend of 10 years, Jennifer Novak, echoed his friendly nature: “Will was quirky, kind, and a carefree person. He never had anything bad to say about anyone and always had a smile on his face.” She enjoyed homebrew events and Will’s beers. “His IPAs were my favorite. He made a raspberry porter that I liked too,” she said.

Novak has been overwhelmed by the response: “The love and support have been astounding. I’ve met complete strangers that told me they loved his beer. I was excited that the club rebrewed it for Southern California Homebrew Festival, where we shared his beer and story with local brewers.”

Like most homebrewers, Campbell was always willing to learn and progress. Juan Higuera, head brewer at Coachella Valley Brewing, was still a club member when Will joined.

“He always had a good attitude,” noted Higuera. “He and Eric would usually have something they were working on at each meeting. What was awesome was how they talked about their process and understood when things didn’t work out.”

According to Kunkle, “He took an active approach to all things the club had to offer, not to mention the ethos to experiment and push his abilities. Some noteworthy beers included a barrel-aged amber that took on a lot of barleywine characters and some top-notch IPAs. He also started roasting his own coffee and made an awesome coffee lager.”

Jeremy Tofte, owner of Melvin Brewing, speaks with humility about the competition and homebrewing in general: “The amount of brainstorming and experimenting a club can do far outreaches what a brewery can do. Homebrew communities are leading the charge on what’s next, which is part of the reason we are working with them. The students are becoming the masters.”

Regarding Will’s beer, Tofte added, “We were stoked to find out one of the finalists was just up the road from our East Village location. Several of us at Melvin are avid cyclists and mountain bikers, so this really hits home. Immortalizing him on a can is special to us, and I cannot even begin to think how emotional and special it will be to the guys in the Coachella Valley.”

Eric Arias added his sentiments: “It’s really cool and an honor to brew the beer on a pro scale. It will be awesome to see Will’s beer in cans and have something with his name on it to hold onto. He was always someone who would lift your spirits. That’s what having a beer or hanging with Will was all about.” 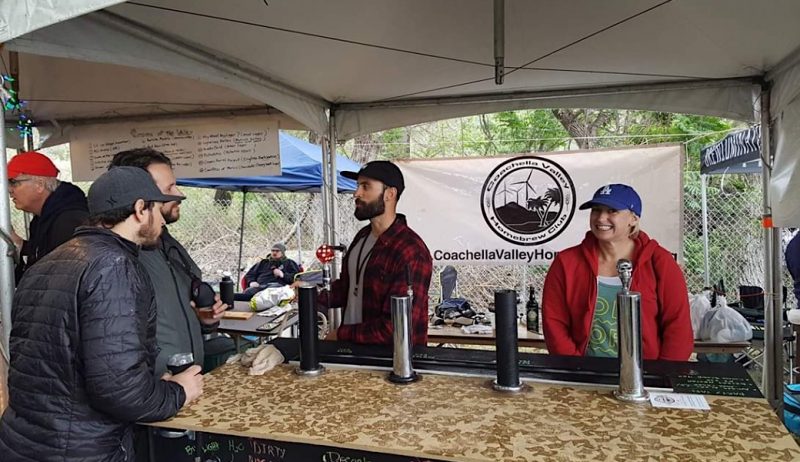 Nobody will be prouder of that legacy than Jennifer Novak, who said, “It’s so great that his friends continue to brew in his honor. I hope it helps them remember him and the love he shared for his friends and the brewing community. I am so happy that everyone enjoys it as much as he did. The success has been amazing. I wish he was here to see it. He would have been thrilled.”

Will Campbell’s story is one that resonates on many levels. It speaks of beer’s community and camaraderie. It speaks of the intrinsic relationship between homebrewing and craft beer. Homebrewers like Campbell have been the foundation of the industry; now the industry will give something back as Will’s legacy is further spread by Melvin Brewing. They’ll fill cans with his beer and adorn them with his image and his name.

A few have spoken of how enjoyable it was to share a beer with Will, and now many more will have that opportunity. It’s a bittersweet story, but one that Will, his friends, and the homebrew community can truly be proud of.

Andrew Smith has been working around and advocating for craft beer for the past 20 years. Smith grew up in England and “thought” he knew everything about beer until he moved to the States. Smith writes for Beer Paper LA and his own blog at CVBeerScene.com