The beer’s hop additions were carried out over a 90-minute period by local members of the AHA, and 210 members participated in the hopping of the beer. 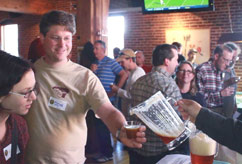 Wynkoop describes the beer as “an unctuous imperial red ale made with premium two-row base malt, small amounts of rye, aromatic malts and flaked oats, and five kinds of hops (Summit, Cascade Sorachi Ace, Amarillo and Columbus). All fermented with an English ale yeast. Ultra hoppy from start to finish, the beer finished at 8% ABV and has approximately 100 IBUs.”

AHA members who buy the beer and flash their membership card receive a complimentary, limited-edition Wynkoop & AHA logoed pint glass with their purchase of the beer.

“Hosting local members of the AHA,” says Wynkoop’s Marty Jones, “that’s welcoming our dream audience. These are people that love small-batch beer as much as we do, they are as beer-passionate as we are.”

“Plus,” Jones adds, “we owe our start down the road of craft beer to the AHA. We’re disciples of Charlie Papazian. We learned to brew reading his books and Zymurgy. For many of us, in our early beer-discovery days the only way to get full-flavored beer was to make it yourself. So hosting the AHA membership rally allowed us to repay a debt and say ‘thanks’ to an organization that we treasure.”

Making Beer Is Easy. Here’s How to Do it

Ready to Brew This? Make Beer from Home

How to Make Beer (with Maximum Enjoyment and Minimum Fuss)