This Pimp My System post was submitted by Salt Lake City AHA member, Brandon Besser. Brandon works part-time for his local homebrew shop and is a full-time professional brewer for Uinta Brewing Co.

Like a lot of homebrewers, I got tired of having to bottle all of my beers. A combination of the time it takes, inconsistent carbonation and mess of bottles was enough inspiration to start planning a kegging system.

I convinced my pre-wife this was a good idea, and immediately started deciding on the general design of my new keezer: size of the freezer, number of taps, where to put it, etc. With the size and layout of our apartment, the only logical place to put the keezer was the living room. This would make it the first thing people see when they come through the door, so I wanted to make it look more like a piece of furniture than a chest freezer with taps sticking out of it while being able to remove the frame for future customization.

After doing some research online, I decided to on a wooden, chest-styled theme. Since I have an engineering background, I was able to draft plans in AutoCAD to determine how everything would fit together and how much material would be needed.

My initial idea was to have the frame be made of wood planks that would allow portions of the chest to be inlaid, but after looking at the materials I had available and what the costs would be, I realized my budget and tool selection would not allow for that option. Then I realized I could use some discounted laminate flooring to create the wood panel look that would match our living room.

The next step was to decide how to attach all the laminate so that it was not glued or nailed directly to the chest freezer. I opted to build a wood frame around the chest freezer using a base of 2 x 4, a collar of 2 x 6 redwood, and 1/2 x 4 wood planks that were on sale. Time to build!

The entire build was constructed using the following tools: 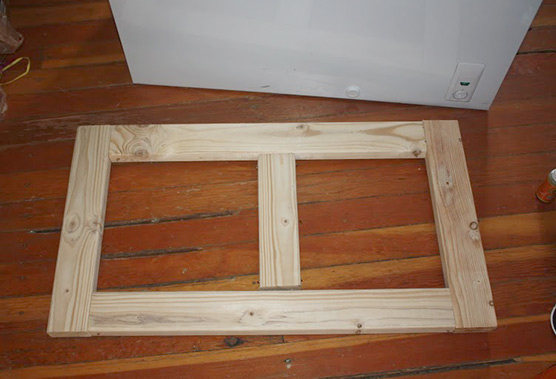 I started by constructing the base frame. I used 2 x 4s to provide plenty of strength for when we have to lift the keezer to move in the future. It also gives some added space to attach the flooring panels. The base frame was constructed to be flush with the edge of the chest freezer so that the wood frame would be able to overlap the base and lock the whole thing together into a solid unit when finished. 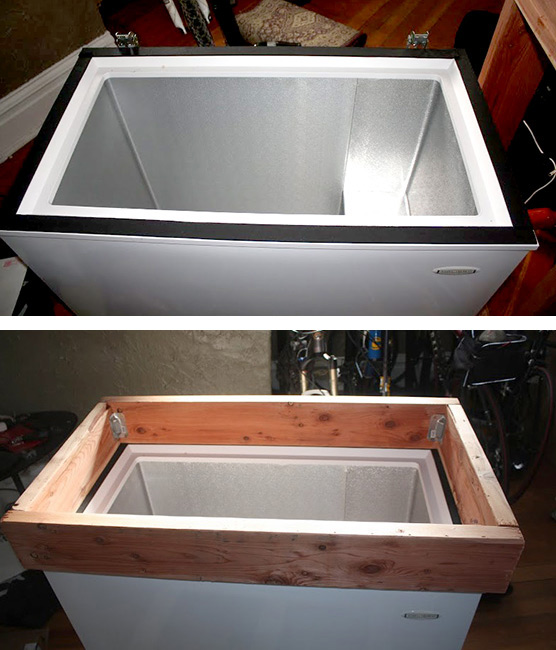 Up next was attaching and sealing the 2 x 6 collar to the top of the freezer. The collar was constructed of 2 x 6 to allow for a little more room so an additional keg or two can sit on the compressor bump in the future. I opted to use some weather stripping between the collar and the top of the chest freezer. I also sized the collar such that it extended past the edge of the freezer just far enough that the 1/2 x 4 wood frame would fit flush to the underside of the collar. The individual pieces of the collar were attached to each other using Simpsons GA Angles, which helped with getting the corners to be 90 degrees. 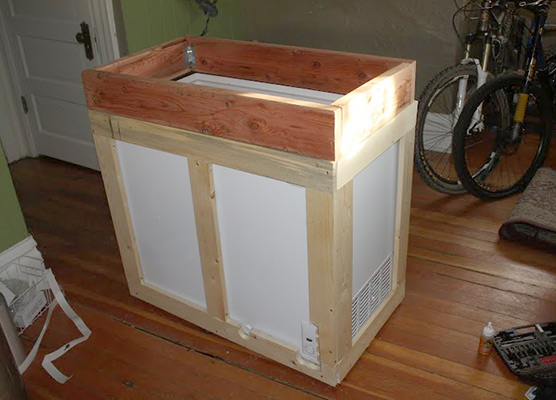 With the base and collar finished, it was time to build the remainder of the frame. The frame was built using 1/2 x 4 planks that were attached to each other using screws in a toenail attachment. The lower portion of the frame was screwed directly to the 2 x 4 base, while the upper portion was not attached directly to the collar. I also used a hole saw to remove portions of the frame so that I would still have access to the drain and the chest freezer controls, should I need them in the future. Note that the frame only extends around three sides of the freezer and the back remains open. 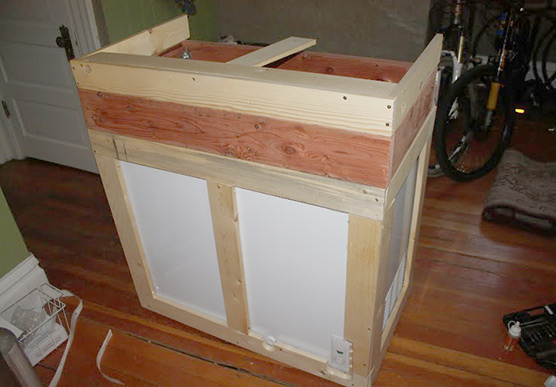 Once the base, collar, and frame were finished, I began creating another frame that would fit around the lid of the freezer. This was also made with 1/2 x 4 planks and allow the lid to sit in there and still provide the seal for the top of the chest freezer. The lid itself is supported by some 90 degree framing clips that are attached to the edge of the lid frame and extend under the edge of the lid. 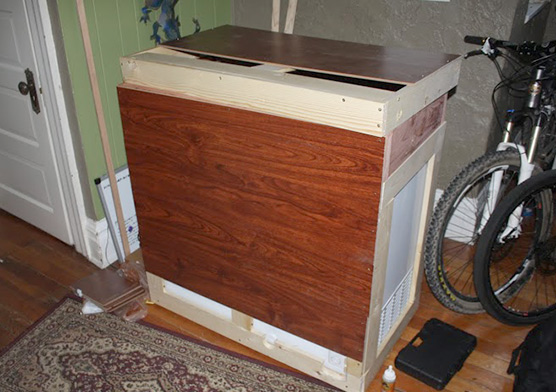 With the frame and collar constructed, it was time to start attaching the laminate flooring. This was all attached using a combination of gorilla glue, pipe clamps and nails. The laminate that covers the collar extends below the collar and is attached to the top of the wood frame, which is what ties the collar to the rest of the frame. 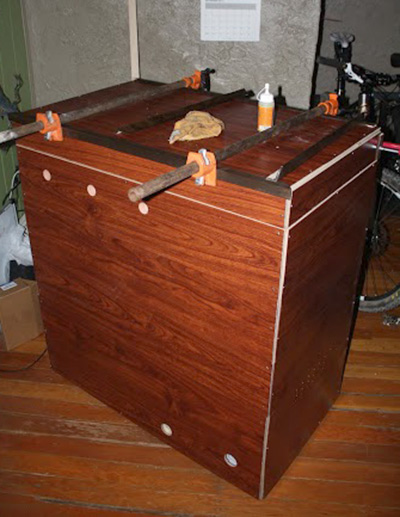 The next step was attaching the wood trim to cover the joints of the flooring and the nails attaching it to the frame. This was all attached using gorilla glue and pope clamps. You can’t see it in the picture above, but on the right side, I drilled several rows of small holes in the lower portion of the panels to allow for air to flow to the compressor. 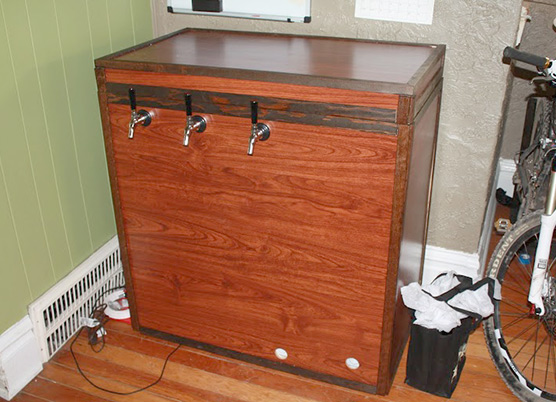 With all the trim on, all that was left was to drill the holes and install the shanks and taps. I opted to have them be off center so that I could potentially expand and add taps in the future. Presently, I have my CO2 bottle and cleaning supplies stored in the keezer, but if I put those someplace else, I should be able to add one more keg, or maybe two more though it would be awfully snug.

Since I finished the keezer, I have thought of a few things I would do differently if I were to build another one. The main thing I would do is see if I could find someone who has a chop saw. While everything worked out alright using a circular saw, some of the cuts were a little uneven and not perfectly 90 degrees which made assembling everything kind of tricky in some instances. The other tool that would have been handy to have is a nail gun. It was hard to nail through the laminate flooring, so I had to pre-drill all of the holes. It would also have made attaching the trim pieces much easier.