Based on Dan Hoffman’s professional life as a world-renowned security expert, author of two security books and currently the chief technology officer for Viewabill.com, you wouldn’t take him as an avid (this is probably an understatement) homebrewer and AHA member. When he’s not helping run software companies, performing live hacking demonstrations, or advising the likes of The Wall Street Journal and Chairman of the FCC, he can be found hanging with his two wonderful sons, brewing beer, cooking gourmet meals or fishing.

For years, I never wanted to refinish by basement. This was mainly due to keeping the family hanging-out all in one spot and not in different places around the house. I also didn’t want to have the typical, bland drywall and carpeting that defines so many suburban finished basements. Once I started really getting into homebrewing and my boys, Nathan and Noah, got to be a little older and really needed a space to chill-out with their friends and have some privacy, the opportunity presented itself to develop something special.

I wanted a multi-purpose space where:

Therefore, it made sense to finish the basement, though I needed a theme.

Years ago, I remember going into a Joe’s Crab Shack and thinking how cool it would be to have a space with all kinds of cool items hanging from the walls and ceiling. Additionally, we are really into Louisiana food and culture and frequently travel there. A few years ago, my best buddies, Dan, Jeff and I, went on an epic road trip to Louisiana where we stayed in the swamp and met the guys from Swamp People and Swamp’d. A Louisiana theme sounded good, though I already did this upstairs, whereby we re-purposed our dining room and formal living room into a very formal New Orleans Brothel-themed Parlor and Musical Stage. The idea became clear: formal Louisiana upstairs and swamp Louisiana in the basement. With that, the Swamp Bar and Brewery was born. 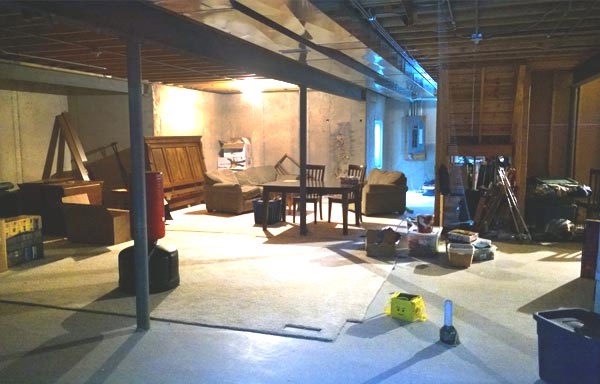 The key criteria with this build-out was authenticity. Everything had to have a purpose and special meaning behind it. With that, the walls were done with reclaimed sheet metal from a sheep farm in Idaho and the wood is cedar. The Spanish moss throughout is from the swamps in Georgia (I boiled it before hanging to get rid of any critters). 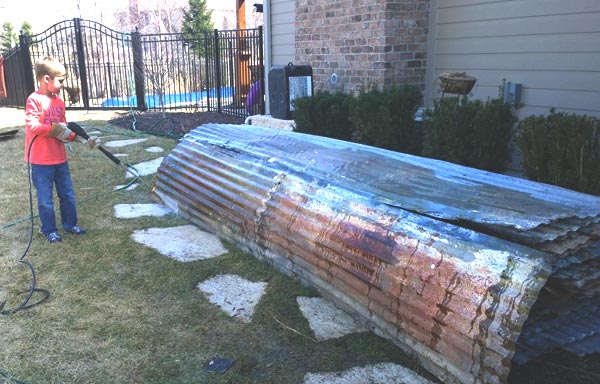 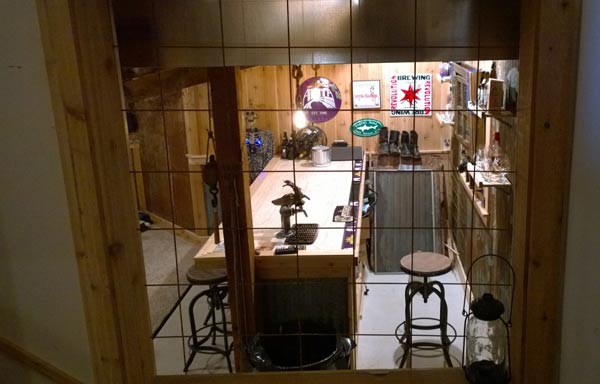 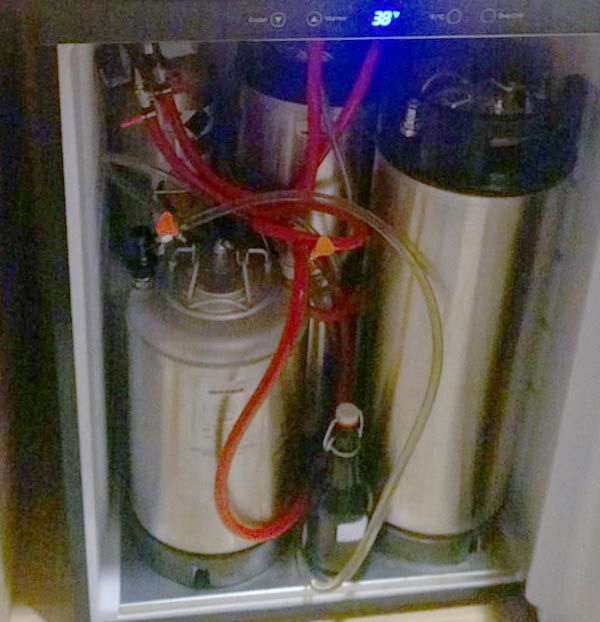 The bar holds three corny kegs of homebrew and I made the tapper out of plumbing parts and a persevered alligator head and claws. The block of wood on which the claws are mounted are oven roasted oak that were used to impart a nice smoky flavor into my buddy Dan’s English Mild that was brewed in the brewery area. To hold homebrewed root beer for the boys and packaged drinks, we also have a kegertator, which interestingly was owned by the owner of my favorite homebrew shop/brewery (Chicago Brew Werks) and still has recipes hand-written on the lid.

I handmade the lights hanging from the bar roof out of rope and electrical parts and the posters on the walls were signed by Ryan Bingham (musician) and Luther & Cody Dickinson (musicians) of the North Mississippi Allstars.

If you look closely at the vertical support beam, you’ll notice a wooden handled, homemade frog gig that we use to gig frogs in the summer (nothing goes better with beer than frog legs!), as well as some old blocks that were used on an old farm in Illinois.  In the wider shot, you can see an antique beer tap/pump along the frame of the grey door.  There are also a bunch of little things around, such as an Amstel Light coaster from a bar in Amsterdam on the Amstel River where I enjoyed an Amstel Light, the Union Jack from the United States Coast Guard Cutter Firebush (WLB-393) on which I served in Kodiak, Alaska, my Certified Beer Server pin pushed into a support beam, a robin-hooded arrow stuck in the back of another arrow from practicing archery in the basement, etc. 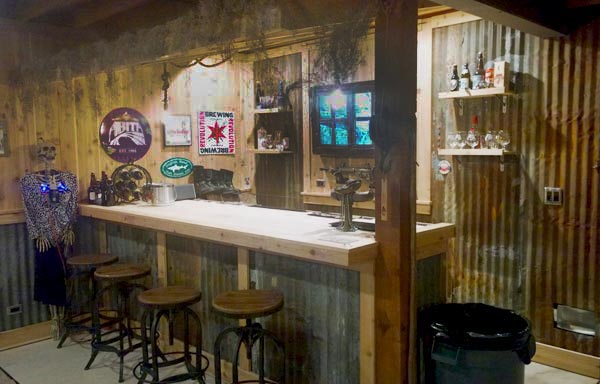 The “window” in the back was made from reclaimed barn wood from a farm in Florida and houses a flat screen TV that plays swamp sounds and scenic videos, with the idea being that it’s like you’re looking out of a window into the swamp.

The bar needed some cool items, so I took advantage of a few online auctions and got some memorabilia. The silver ice bucket on the bar is the actual bucket used by Breaking Bad’s Walter White character in the final season episode “Rabid Dog.” One of the mats along the railing of the bar was used onscreen at a bar Sons of Anarchy (SOA) motorcycle club would frequent on the show.

The skeleton on the end is wearing the actual dress that the character Venus wore on SOA. It also has “Skankenstein’s” Jumper Cables attached. The cables were used at SOA’s Redwoody Studios during the beginning of an episode during the last season. Instead of electricity going into the bolts on Frankenstein’s neck, the electricity went into the Adult Film Star playing the character of Skankenstein at pretty much the same area you see on the skeleton.

The boots you see behind the bar were the screen-worn boots worn by the SOA characters Chibs and Rat Boy. The gloves you see on the AR-15 below the window were also screen-worn by Rat Boy’s character, as is a chain hanging from the bar. 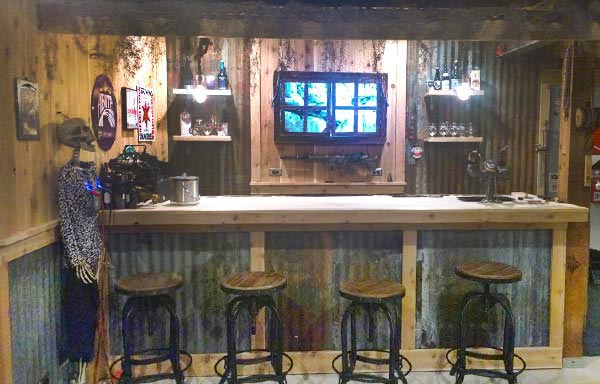 I feel very strongly that brewing is a social event that should include the family. Therefore, having a permanent brew area near where the boys are hanging-out, as opposed to tucked away in the garage by myself, was important. This had to be done safely in a basement, so the traditional propane setup wasn’t an option. My buddy Dan suggested induction. 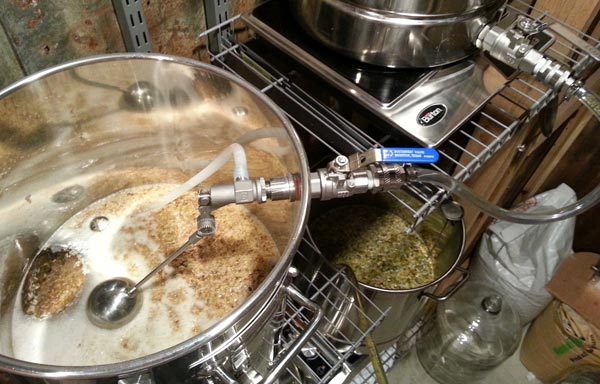 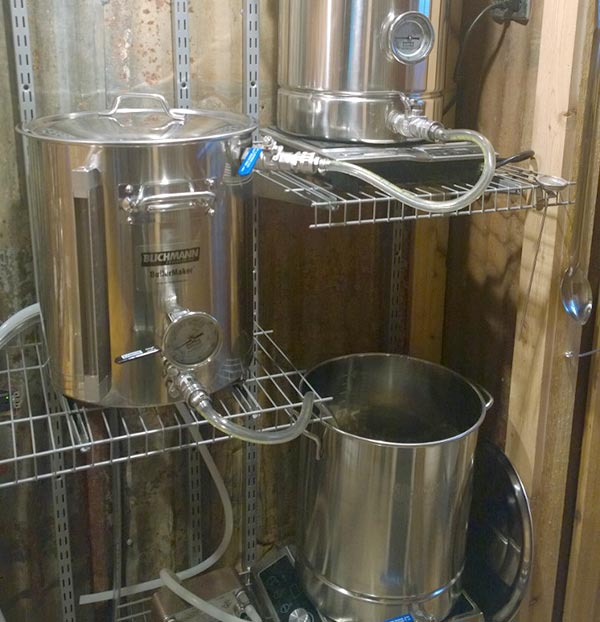 Going all induction required a considerable amount of research to get the burners, correct pots, etc.  However, it was well worth it to be able to safely brew in the basement and still have a powerful heat source. I can heat 6.5 gallons of wort from sparge temperature to boiling in about 18 minutes with the 3500 Watt burner. If anyone wants the details on the burners and equipment, just ask.  I just use gravity and it works really well with this setup.  I do have a pump and a plate chiller for cooling (don’t need it to transfer) and I also filter the water from the sink into the HLT.

In keeping with authenticity, we also only brew all grain and we mill our own grains immediately prior to brewing.

A traditional bathroom just wouldn’t be appropriate in this space, so we created the outhouse. The sink is made out of my buddy Dave’s pot we use to boil crawfish. Every time we brew we log it by writing on the walls and visitors to the space continuously add their names, drawings and sayings to the graffiti. 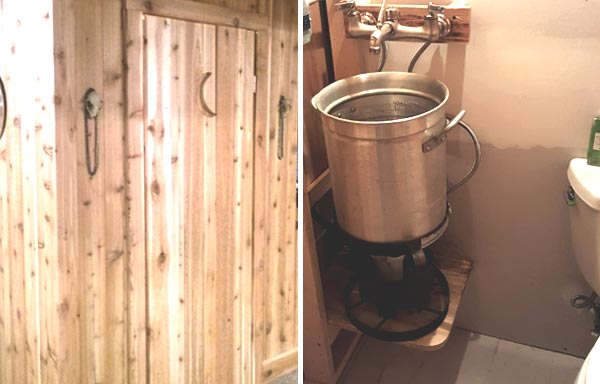 The clock on the side was used onscreen during SOA, at Tellor Morrow on the wall in the office. If you look for it when you watch an episode with a scene in the office, you’ll see it high above the desk. The skulls are from raccoons and were found in the woods by Dan and Jeff.

Entertainment and Other Areas

We’ve got the obligatory 70 inch TV with surround sound, as well as Xbox and old school Nintendo NES. The shark on the wall is over six-feet long and was caught by my son, Nathan. The life ring is off of the aforementioned Coast Guard Cutter on which I served. 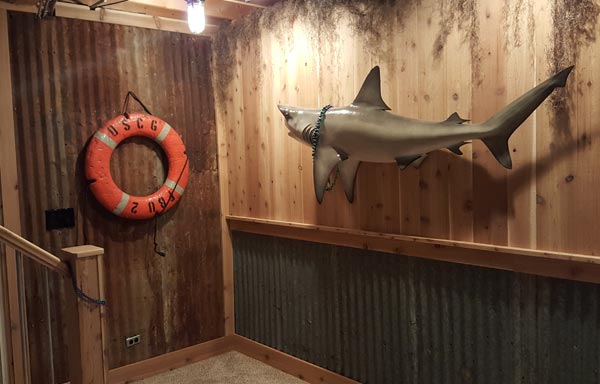 A really cool piece of technology we’ve added is the Amazon Echo. This actually comes in handy when brewing, whereby we can simply say, “Alexa (The wake-up name for the device), set a timer for 15 minutes, so I can add hops”, or “Alexa, play North Mississippi Allstars Pandora Radio”, or even, “What is the address of Chicago Brew Werks in Plainfield, Ill.?”

Lastly, we needed a place to keep all of those darn Legos, as those of you with kids will completely understand.  So, we created a Lego workbench area. 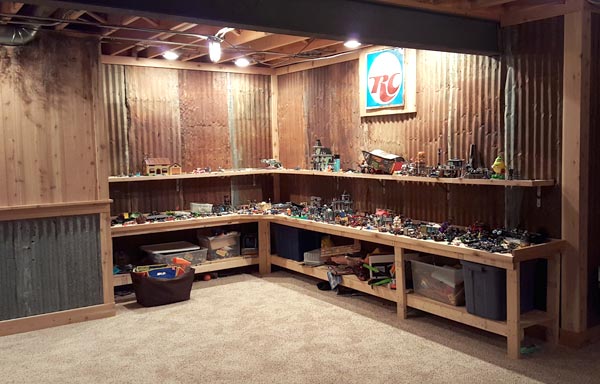 We are very pleased with how the build turned-out and it really struck the right balance and hit our key criteria. I am pleased to say that the beer my buddies Dan, Jeff, Rob and I crank-out is exceptional and I’m grateful to be able to brew it and drink it while spending time with my boys, Nathan and Noah. 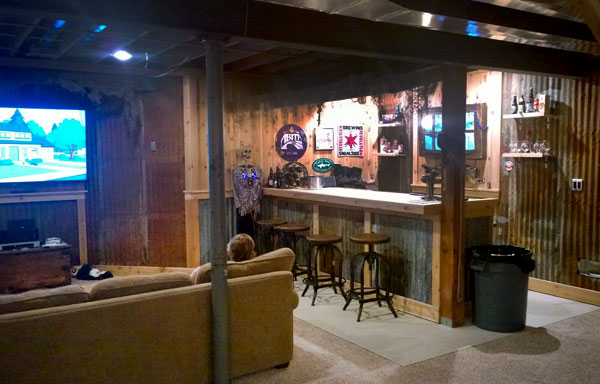 For more information on this set-up, or to ask Dan a question, check out his thread on the AHA Free Forum.