American Homebrewers Association member Paul Wicksteed hails from Wellington, the craft beer capital of New Zealand. Avid homebrewer, Great Expectations club member, and aspiring nano-brewer, Paul has fully immersed himself in the art and science that is making beer. When he is not brewing or working on his HERMS, you can find Paul interacting on the AHA forum as “another 1,” updating his brewery’s website, or adding a new video to his YouTube channel.

I have been seriously homebrewing for three years now; serious in the sense that it has become an all-consuming hobby. I started off on extract brews, moved onto brew in a bag (BIAB), and then fortunately I have access to a SABCO to brew my all grains in while I toy with the build of an all electric brewery.

I chose electric as I wanted to monitor and accurately control the brewing process, particularly the mash. Many of the recipes I do have 90-minute mashes with multiple step infusions and rests, so the need to accurately control brews lead me to a heat exchanged recirculating mash system (HERMS) setup.

While I was designing my HERMS using a coil in a 50 liter (13 gallon) hot liquor tank (HLT), I came to the conclusion that the amount of energy that was needed to keep that volume of water at a certain temperature and the time it would take to raise that temperature for step mashing was far too much, and therefore HEX was designed. 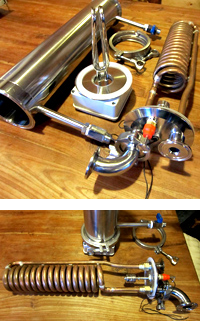 Having a smaller volume of water would take less time to heat and would be more responsive to temperature changes. This water would then transfer its heat to the beer flowing through the internal copper coil as per the HERMS principles.

HEX was calculated to have a four liter (1 gallon) volume, so I even considered that it could be used for heating water on demand and replace the need for an HLT. Connected to pump and ball valves, there would be enough flow control to hit the right temperatures. Also HEX is an airtight unit, effectively acting like a pressure cooker, so heating times are reduced even further.

Also welded into the top cap is a float sensor to ensure that the vessel is full of water before the element can be turned on, and since HEX acts like a pressure cooker there is also a pressure relief valve welded into place.

Internally the top cap connects to a six-meter long coil of half-inch copper pipe. Luckily I have a friend whose full time job is building beautiful brewing works of art, Chris Banks of Banks Brewing Hardware, so all I needed to do was come up with the idea and let Chris do his welding magic.

My job, however, was to make the copper coil. I did this by hand rolling the pipe around a 75-millimeter PVC pipe. One end of the copper was bunged closed and the entire pipe was filled with sugar. The sugar acted as an internal force preventing the pipe from flattening or collapsing, and once finished the sugar was easily removed by dissolving it overnight with warm water. Sand, on the other hand, gets stuck in coils and is hard to clean out.

On the main body of HEX there is an inlet and outlet pipe for water. These pipes were over extended so that a four-inch polystyrene ring column can be wrapped around for thermal insulation, but HEX looks so shinny I haven’t bothered wrapping it up yet.

For the first test I reticulated 15 liters (4 gal) of 50ºC (122ºF) through it and it took twenty minutes to increase the entire volume of water to 68ºC(155ºF). The temperature sensor that controlled the PID was positioned on the outlet of the beer (test water). The first test can be watched here.

Another series of tests averaged out the time to around fifteen minutes by using actual grains that held a higher thermal mass and by insulating the plumbing.

HEX was also designed with the anticipation of using it for cooling wort as well by running glycol or ice water through the cylinder, allowing for a closed circuit brewing system. A couple of tests with a higher-wattage element are scheduled to determine if the unit can be used to replace or at the least support the HLT, and of course the completion of the entire electric brewery.

Summer Cider Making: If You Can’t Stand the Heat Stay Out Of the Kitchen

How To Make Kombucha