In 2005, Matt Klein was in the market for a new home and found himself attracted to a piece of property with a large backyard and a shed with power, built-in air conditioning and a fan. The shed acted as a workout area for the previous owner, but Matt had other plans—much bigger, beer-soaked plans.

After ditching the abandoned workout equipment, Matt began envisioning the perfect retreat. This vision quickly evolved from being simply a man cave to a full-service tavern. Motivated by the first beer he ever enjoyed, Matt decided he wanted 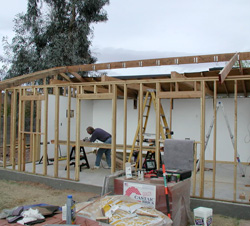 a Guinness-inspired tavern with the wood craftsmanship of a traditional English Pub.

“I wanted something dark, smoky, a bit gloomy even,” said Klein in regards to his plans. But it still needed to make you feel comfortable and relaxed.” With a plan in mind and beer in hand, Matt began to put the gears in motion.

Coming from a long line of kin who value hard work and the DIY-mentality, Matt turned to family for help on his lofty project. With his father’s experience in construction and grandfather’s skills in electrical work, three generations set out to bring the backyard tavern to fruition.

The first step was to expand the width of the 12’ x 24’ shed by six feet to create ample space for a bar. 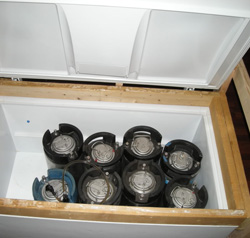 A six foot foundation slab was poured and the walls were extended to create an 18’ x 24’ space. Matt and his father also decided to raise the roof and vault the ceiling, complete with wooden beams, to give the interior a more open feel while maintaining the dark yet cozy English pub ambience. Despite already having electricity, Matt opted to bring in more power with the help of his grandfather, a retired electrician, in order to power numerous appliances and electronics.

After a bulk of the construction and electrical work was complete, it was time to move on to the interior. The “L”-shaped bar and back bar have a total footprint of 11’ x 8’. Four taps, 3 keezers, a mini fridge, mini freezer, and sink are amongst some of the amenities behind the bar. 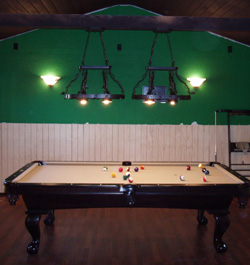 With the bar in tact, Matt set out to work on installing the wood floors, wainscoting and painting the walls. The dark wood of the floor, bars and wainscoting in conjunction with the deep green walls achieved the English/Irish hybrid tavern that was Matt’s initial goal.

Having completed the construction projects involved in upgrading the shed, Matt brought in some of the typical bar niceties to really put on the finishing touches. Whether you want to listen to music and play pool or sit at the bar and watch the game, Matt’s tavern has it covered. The final touch was a mirror etched with the Guinness logo; a constant reminder of the inspiring forces behind the strenuous project.

Don’t let this concise article fool you. The entire project took seven years, and Matt still considers it only 95 percent done. However, the remaining work has not stopped Matt, his family and friends from enjoying the fruits of his labor. The backyard bar has become the new hot spot for homebrew tastings with Matt’s club the Arizona Society of Homebrewers.

Dean Robb, Chris Harton and Brandon Luehrs all live together in Santa Barbara, Calif. The …More

Build Your Own Aquarium Bar

How to Build a Wooden 6-Pack Holder