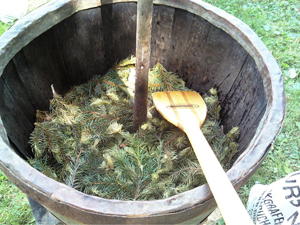 For this week’s Pimp My System we’re taking a quick journey back in time to see what a high-tech brewing set-up looks like when you subtract electricity, stoves, wort-chillers, pumps, and even thermometers. The set-up consists of a 12 gallon copper kettle suspended over a wood fire. The real “techy” part of this system is the block and tackle used for moving the kettle closer or farther from the fire– a straightforward way to control temperatures and eliminate boil-overs. The mash tun is half a whiskey barrel (planter from the hardware store) with a hole drilled in the bottom and cork on the end of a stick to control the flow. Straw and pine boughs are used to create a screen to help separate the wort from the grain. Using straw and pine do little to impact the beer’s flavor but the mash tun can be outfitted with spruce boughs to give the beer a unique spruce flavor. There are no siphons or hoses in this rig, buckets are used for making transfers to and from the brew kettle and mash tun.

As far as ingredients, it is important think about what goods were available in the past. For settlers (or soldiers) in the “new land”, supplies of malt and hops were not always readily available and many early recipes simply used what they grew. Squash, pumpkins, beans, potatoes, chestnuts, sage, bog myrtle, mug wort, and corn are some ingredients that could have been used in the brewing process. Who wouldn’t enjoy a fine pumpkin squash ale with hints of spruce? 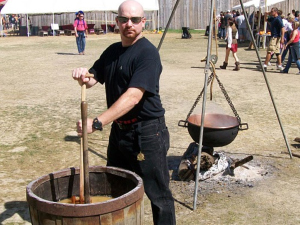 The brewing process is very simple:

The Heritage Festival (pictured) is a three day event; therefore, the beer brewed on Friday is consumed on Sunday. The young beer will turn out cloudy, but it does have alcohol content. Historically, beer clarity wasn’t a concern and once the beer had undergone the bulk of the fermentation it was swiftly consumed. As the saying goes “fresh beer is the best beer”!

See more of Mike’s photos below:

Meadmaking and medieval history are two passions of mine. They might seem worlds apart, but …More

Test your knowledge on lautering and sparging in this week’s Tuesday Beer Trivia quiz. We do it …More