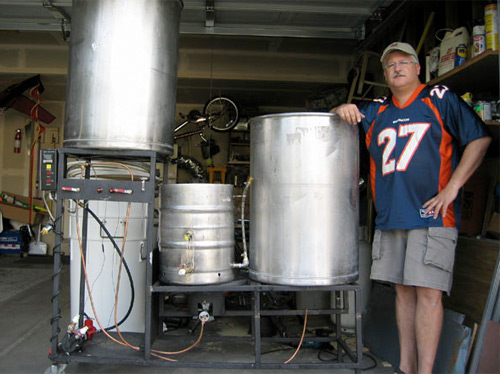 This week’s pimped system belongs to Walt from Colorado Springs, CO and goes by the name of The Lama Brewery (Yes that is how it is supposed to be spelled). The Lama Brewery boasts a fifty-five gallon HERMS brewing system along with many other impressive homebrewing gadgets most of which are designed and made by Walt himself. 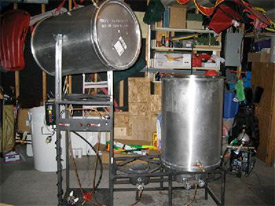 We will start with the brewing system. The Lama Brewery is a fifty-five Gallon brew system capable of producing forty gallons of wort in a single batch! The Lama is comprised of two fifty-five gallon stainless steel drums which serve as the mash tun and the boil kettle, and a fifteen gallon converted keg is used for the hot liquor tank. One propane burner is used to heat the hot liquor tank while two burners welded together to the brew sculpture frame are used to heat the boil kettle. A pump pushes the wort through the recirculating system, which feeds wort housed in copper tubing through the hot liquor tank and back to the mash tun, pumps also push water from the hot liquor tank up to the mash tun. Finally the Lama utilizes gravity to feed the wort from the mash tun to the boil kettle. You may also wonder how Walt cleans out his fifty five gallon mash tun. Well for him it’s easy!  The mash tun sits on a home grown tipping system that allows the vessel to pivot and sit sideways, this allows Walt to easily scoop grain out of and clean his mash tun. Since the tun weighs roughly three hundred pounds full of spent grain lifting the mash tun off of the burner is not an option. 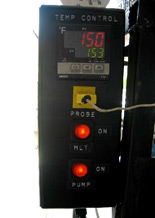 The Lama also has an automated temperature controller that monitors the heat of the wort in the mash tun and adjusts the heat of the hot liquor tank which in turn maintains the recirculating wort, that is flowing through it, at the correct temperature. This helps provide the most accurate mash temperature.

After the mash and boil are finished the unfermented wort is transferred into two thirty-three gallon fermenters, capable of fermenting twenty gallons of wort each. When fermentation is complete the beer is kegged and carbonated and ready to serve.

But the fun does not stop there and neither does Walt’s ingenuity. His other self made tools and equipment include a homemade cooler that doubles as a work bench.  His cooler is connected by air duct to his Kegerator which cools for both systems. Walt uses the ample space in his cooler to store hops, grain, and fermenting beer and the system does not require any additional power or refrigeration unit. 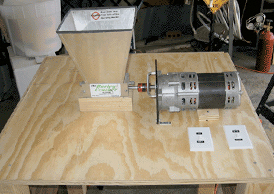 The Lama brewery also utilizes a grain miller that runs on a motor fully outfitted with switches to turn the mill on and off as well as run it in forward and reverse. The mill is capable of grinding a hundred pounds of grain in a matter of minutes completely hands free, save from throwing the switch.

The Lama Brewery has taken all the aspects of an amazing home brewery and made it bigger! We look forward to seeing more awesome brews coming from Walt, and his brew system and until then BREW ON!