After a colleague shared a homebrew in 2006, Lee was hooked on the idea of being able to produce beer at home for a reasonable price, with flavors and aromas he had never experienced before. Two years later, Lee introduced homebrewing to his friend and fellow classmate, Taylor, who had experience in winemaking but had yet to test the waters of brewing beer. The duo brewed together for some time, but a combination of priorities involving school, family, and work forced their new passion onto the back burner.

After their hiatus, Lee and Taylor decided it was time to get back into homebrewing, and that they needed to step up their game. The jump to all-grain and the slew of new equipment that came with it marked the second chapter of Lee and Taylor’s journey. Their brew days went well and their process seemed tight, but they were stumped when two of  their final products that seemed to go without a hitch were exhibiting off-flavors. This sent Lee and Taylor back to drawing board… 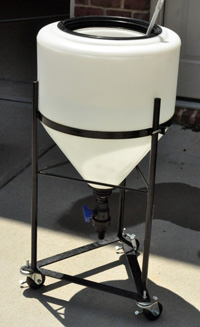 The first time we sensed the off-flavors, we were stumped. We were still new to homebrewing and didn’t quite realize the importance of temperature control during fermentation, so we wrote it off as something due to sanitation. The second time it happened, we knew our sanitation practices were on point and started to do some investigating. It was then that we realized we had to control our fermentation temperatures. But how were we going to do this? We wanted to keep the cost on the lower end as our brewing budget was not that great.

We were able to acquire two 15 gallon plastic conical fermenters off of craigslist for the amazing price of $75. So now what? We have the capability of fermenting at least 10 gallons at a time in one vessel, but how are we going to regulate the fermentation temperatures? We looked numerous online homebrew forums for solutions. It seemed like everything we came across involved placing the conical in a fridge/freezer of some sort or a chamber with an A/C unit. We were limited on the amount of space, and again, trying to be budget conscious, we decided to put our engineering minds to work and be a little creative. Then it dawned on us… we use an immersion chiller to cool down the wort after boiling, why couldn’t we use this same concept to regulate the temperature in our conical? We decided that this was the route that we wanted to go and wanted to see if we could make it work. Enter the conical immersion-temperature-controller-thingy.

The Three Main Parts to Our System 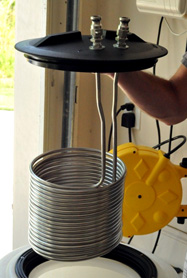 All-in all, when complete, the system functioned much better than we ever expected. We placed water and ice in the cooler, submersed the pump, attached it to the cooling side of the temperature controller, turned it on, set it to 17.3°C +/- 0.5°C and let it go.

Our only issues were the level at which we had to elevate the pump to work efficiently and the fact that we had to add additional ice nearly every day. To address the first issue we are adding a higher flowing pond pump which will up our flow rate from 158 gallons per hour (GPH)  and a lift of 3.6’ (height to which it will pump) to 620 GPH and a lift of 11.5’. To address the adding ice issue we are substituting our ice bath in a cooler for a 1.7 cubic foot dorm room refrigerator with a custom built cold water enclosure that the new pump will sit in.