Everyone knows Seattle—it’s the birthplace of grunge and Jimi Hendrix, the home of Starbucks, Microsoft, and Boeing, and a place full of sandal-wearing, latte-drinking, hi-tech, hippie freaks. Oh yeah, and rain.

Yes, we have all of that and more, including a strong craft beer and brewing culture that is getting ready to celebrate its 30th year. The popularity of craft beer in the area is perhaps best illustrated by the fact that we have nine microbreweries—that is, nine microbreweries that start with the letter A. About 70 breweries are within an hour’s drive, and even the dive bars have a good selection of craft beer on tap.

This year’s sold-out National Homebrewers Conference will be June 21-23 in the heart of downtown Bellevue, Wash., just across Lake Washington from Seattle. With the Hyatt Regency Bellevue as your home base, you can easily walk to a wide variety of breweries and bars. Wineries and shopping aren’t far away, and there are some great restaurants nearby. And by all means, come early!Featuring at least 64 breweries, the Washington Brewers Festival will be June 15-17 in Redmond’s Marymoor Park, about seven miles away.

If you’re looking for a quick stop with a lot of variety, check out the Taphouse Grill just a couple of blocks from the conference hotel, featuring 160 beers on tap. Yes, 160. When you’re done sampling there, walk next door to Rock Bottom and taste one or all of brewmaster Brian Young’s award-winning creations.

If you want to range further afield, walk a couple of blocks to the transit center and catch a bus to downtown Seattle, or go on one of our self-guided tours.

Stop off at Pike Brewing—as long as you’re there, go to the Pike Place Market and see the world-famous flying fish and the original Starbucks store. Head up the hill to the McMenamins Six Arms on your way to the original Elysian Brewing location.

Or you can make your way to the Ballard/Fremont area (Frelard) and visit Maritime Pacific, Hilliard’s, Northwest Peaks, Hale’s, and Fremont Brewing. Or go to the south end and hit Two Beers, Schooner Exact, Epic, Emerald City, and Georgetown Brewing.

If you’re in the mood for some alcohol-that-is-not-beer, head 15 minutes up the highway to Woodinville where there are more than 50 wineries and tasting rooms. Or design your own distillery tour, with six distilleries in Seattle and four in Woodinville.

There’s a lot to do in the area, including visiting the Space Needle and Seattle Center, riding the monorail to downtown near Pike Place Market, and visiting the Science Fiction Museum and Experience Music Project. Come early or stay late to catch a baseball game at Safeco Field, or check out a Seattle Sounders FC match Wednesday night before the conference. Go to the zoo or aquarium, take a ferry to one of the islands, go hiking, kayak on the lakes, or just watch the sockeye in the fish ladders.

If you can’t make it early enough to go to the Brewers Festival, hopefully you can take advantage of one of our pre-conference events. Conference organizers have set up eight brewery tours, a sold-out beer-pairing dinner, a beer-pairing breakfast, and a sold-out tour of the hop fields in Yakima. As you can see, attendance on the tours is limited, so sign up early! 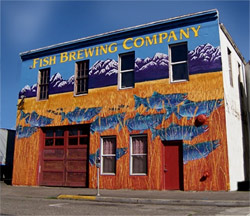 This tour begins by heading south to Tacoma where the first stop will be Fish Brewing. Fish is the maker of Fish Tale Organic Ales, Leavenworth Biers, and Spire Mountain Cider, and a line of highly anticipated high gravity seasonal beers. The next stop will be Harmon Brewing, an award-winning brewery that hopefully will have some Harmon Imperial Red (formerly known as Killer Brew) on tap. Food will be served. The final stop will be at newcomer Airways Brewing, just two years old but with a great reputation.

Skookum Brewing is the first stop on Tour C. This beautiful brewery is set in the woods, making it feel like a rustic retreat. The people are friendly and beers such as Amber’s Hot Friend are top-notch. Next up is Chuckanut Brewing. This lager brewery is Will Kemper’s latest venture, and despite being open for only four years, they are already a two-time winner of the GABF Small Brewing Company of the Year. The final stop will be at Boundary Bay Brewing, brewer of many award-winning brews and voted the Best Brewpub in Washington state. Food will be served here. 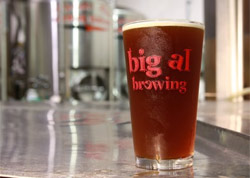 First stop is Odin Brewing, a newer Seattle brewery where you can sample beers that range from a crisp Kölsch-style ale to a Belgian. The second stop is the Elliott Bay Brewing Company’s Burien location, where they brew a wide range of certified organic beers including everything from wit to imperial stout. Food will be served. The final stop is Big Al Brewing—Al (Alejandro Brown) is a local homebrewer gone pro, and he features a line of “local hero” beers made with homebrewers.

Brewery Tour G starts off with Naked City Brewing. A former homebrewer, owner/brewer Don Webb brews excellent beer on a 3-barrel system exclusively for the pub, supplementing the lineup with guest taps. Next up is Twelve Bar Brews, a new brewery that is producing some of the driest, crispest ales you’ll find but often with a big hop punch. The last stop will be Redhook Brewing, which has been brewing in the Seattle area for over 30 years. You’ve probably tried some of their nationally distributed beers, but they also make some great brews that are available only at the pub. This stop will also have food.

Tour H begins at Pyramid Alehouse, south of downtown Seattle and across from Safeco Field. Although many of their beers are well-known and widely available, the pub always has something new for the adventurous beer lover to try. Next stop is Schooner Exact Brewing—this brewery began in true nano-fashion and recently expanded into a bigger system to accommodate demand and feed its barrel program of excellent bourbon-aged and sour beers. The last stop is Epic Ales; known for an eclectic selection of beers to challenge any palate, their beers are designed to be paired with food.

During the day, expect great talks for all homebrewing skill levels on a variety of topics. Learn more about new hop varieties (and taste beer made with them), water chemistry, mead, and even Soviet-era brewing. Get tips from pros in the Going Pro panel discussion, or learn how to organize a beer and food party from Chef Warren Peterson. We’re even bringing back the club organization panel that was so popular last year. Judging for the National Homebrew Competition will take place on Thursday. 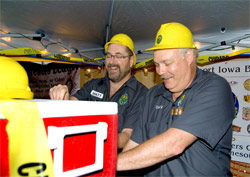 Pro Brewers Night on Thursday will feature more than 40 breweries vying to serve you their beer, and Club Night on Friday will feature 50 clubs lining up the taps. Outrageous outfits, booth themes, and too many tasty beers to try in one night are the highlights of Club Night. The Awards Banquet on Saturday will feature the fabulous beer and food pairings of The Homebrew Chef, Sean Paxton, as attendees have come to expect.
On Friday, Pike Brewing Co. founder Charles Finkel will be giving the keynote address. In between conference events, slake your thirst in the Exhibitor Hall where you can peruse the latest offerings from equipment manufacturers and vendors, get your questions answered directly by the experts, and sip on a tasty homebrew. And let’s not forget the hospitality suite, aka Sasquatch Social Club, where clubs will have their brews on tap for your tasting pleasure.
With more than 1,800 homebrewers expected, it’s going to be a conference packed with fun, beer, and brewers. See you in Seattle!
Tom Schmidlin, PhD, is co-chair of the 2012 National Homebrewers Conference and a member of the AHA Governing Committee.

Directions: To toast the malt, broil it for about 90 seconds at a time until it starts crackling a bit. Remove, stir, and repeat, making sure it doesn’t burn. Repeat four times. It should smell a bit like popcorn at the end.
Steep and muddle mint (if using) in hot (not quite boiling) water; add to mash.  Infusion mash at 154° F (68° C) for 60 minutes. Sparge with 165° F (74 ° C) and collect enough to yield 5 gallons after a 90 minute boil. Stir honey in at beginning of boil. Chill, add cider, and pitch yeast.

This article is the May/June 2017 Zymurgy magazine online extra. Homebrew Con returns to the Twin …More

Test yourself on beer presentation, storage, and pairing in this Tuesday Beer Trivia. Pairing beer and food …More