So say you’re a lambic brewer, or a mead maker, or perhaps, a brewer who likes to experiment with new and novel ingredients to make vegetable beer. If so, then what you might not know could have harmful and, perhaps, life-threatening implications. Did you know that one of the most toxic poisons known to man resides in many of the most common fruits and vegetables that are consumed and that it can be released under circumstances common to homebrewing? Below, you’ll see a few questions for you to check whether you might be in danger.

Cyanide is one of the most rapidly acting lethal poisons. In its most common form as hydrogen cyanide, it can exist in a gaseous form as well as a liquid form; the liquid form is also called “prussic acid.” Cyanide was the poison used in the tragic cyanide-Tylenol deaths, the deaths associated with the Jonestown massacre and the Hale-Bopp suicides in California. Interestingly, cyanide is the poison used most frequently in suicide attempts by chemists. Acute toxicity may result from medicinal uses (e.g., Laetrile).

Chronic exposure can also present a health risk, with the risk of neural and visual problems arising after prolonged exposure. Less well known is the fact that cyanide is an organic molecule which has been regularly detected in outer space, and has been found to be an essential precursor in the synthesis of basic biological building blocks such as nucleic and amino acids. Cyanide has a normal role in metabolism of both animals and plants, and occurs as a result of Vitamin B12 metabolism . It is also present in the body due to environmental factors such as food and smoking. Interestingly, many of these compounds produced by plants are targeted at insects, thereby acting as a defense mechanism.

In the human body, cyanide prevents red blood cells from being able to utilize oxygen. A key protein in the respiratory function of the cell is inhibited by cyanide, and the cell suffocates. A rapid progression of symptoms occurs with cyanide exposure and a person who swallows or inhales (smells) too much cyanide can lose consciousness, fall into convulsions, and die within 15 minutes. Mortality from cyanide may be as high as 95 percent (Turkinton, pg 90). 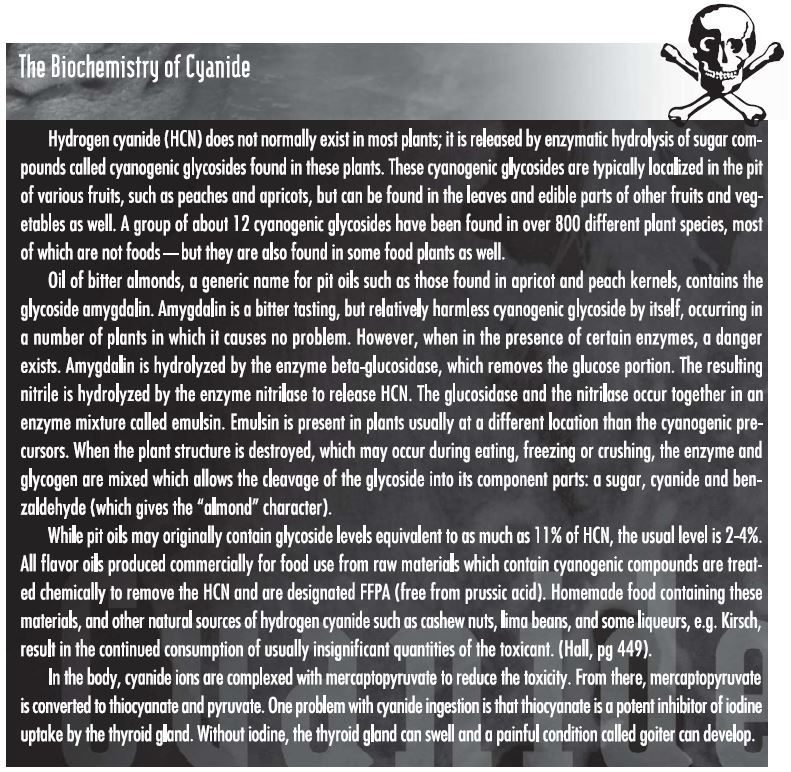 Studies have found that there are more than 1,000 species of plants that have the potential to release cyanide. (Conn, pg 299) This cyanide is found in its gaseous form, hydrogen cyanide (which we’ll abbreviate as “HCN”). HCN isn’t present normally in most of these plants, but occurs only when the plant tissues are crushed or disrupted. When this happens, cyanogenic precursors meet specific enzymes liberated from damaged plant cells; this results in the precursors being converted to HCN. (For more details, see the sidebar: Biochemistry of Cyanide.) The most dangerous situation occurs when the precursors and the converting enzymes occur together as they do in some nuts and fruit pits such as those in raw almond, raw apricot, peach and cherry. When it comes to ingestion of cyanide, the greater the dose, and the more frequent the dose, the greater likelihood of physiological problems. The body is capable of removing some of the HCN by itself, but chronic doses may be too much for the body to cope with. Indeed, one possible complication of chron­ic low-level cyanide consumption is goiter­ a painful swelling of the thyroid gland.

While governmental agencies such as the FDA and BATF have concerns about cyanide generation from pits, none of these agencies has hard data as to how much might be toxic or how much might be lethal. In fact, much of the research on cyanide toxicity focuses on the study of grazing livestock, not on humans. There are many factors that are involved in the toxicology of cyanide, and while it is easy to determine that a given plant has the potential of cyanide production, it is difficult to determine exact quantities of HCN produced by the plant itself. It is also difficult to determine a dosage level of cyanide within the subject eating these plants. The size and kind of speed of ingestion, type of food ingested with the cyanogen and the presence or absence of hydrolyzing enzymes within the subject are important aspects for determination of the effect of a dose of cyanide in a system.

There is also much conjecture as to the level of cyanide dosage that causes lethal effects in humans. The minimum lethal dose of HCN taken orally in humans has been estimated to range between 0.5 mg and 3.5 mg per kg of body weight (Conn, pg 303); however, as few as 50 apple seeds have been known to produce toxic results (Rush poison center). Conn also cites a case of cyanide poisoning in children who had eaten large amounts of western chokecherries without removing the stones.There is also a case cited in which a 3-year old child incurred cyanide poisoning from eating 15 apricot kernels. Upon assay, these seeds were found to contain 0.33% available cyanide (Hall, pg 450).

Cyanide and the Homebrewer

OK, so now you know a bit about cyanide. Let’s talk a little about brewing.

A typical comment by judges of beers and meads made with fruit is that almond notes are necessary to round out the flavors of cherry and other fruit beverages. Certainly, the almond flavor does add character and richness to the brew, but there is a direct relationship between almond flavor and the amount of cyanide precursor initially present in the fruit.

When it comes to the addition of fruit to beer and mead, practices vary widely. Often the maker incorporates fruit into the beverage during fermentation, either in the primary or in the secondary. Before doing so, the fruit is often crushed or the skin ruptured without removal of the seeds. This precrushed fruit may be sanitized before addition to the fer­menter by heating it to 150-170° F (66-77° C) for several minutes, sometimes with seeds. Other times, the fruit is simply added to the kettle near the end of the boil for 5 to 15 minutes, with or without seeds, crushed or uncrushed. Fruit processed in these ways may go into primary fermentation where it is in contact with the beer for a relatively short time, or it may go into the secondary fermenter for weeks to months. (Belgian brewers used to keep cherries and their pits in fermentation for a year or more.) Unfortunately, nearly all of the practices above in which seeds are present have the potential to produce some level of cyanide in the finished beer or mead.

And cider is no exception. Seeds are not commonly removed before apple crushing and so the potential for cyanide in the fermentable must exists.

So the question remains: what must a brewer do to work safely with fruit?

The answer is not all cut and dried. One remedy to the problem is to cook plant products that are high in cyanogenic compounds before using them in brewing. This denatures the enzymes present in the plant including those that are involved in the cyanogenic reactions. However, such cooking must occur before the fruit or vegetable is damaged so that the enzymes are not liberated and allowed to react with the cyanide precursors before denaturation.

However, there is another, more serious problem. It turns out that the enzymes needed to produce cyanide from plant precursors naturally occur in the human digestive tract where they are generated by normal intestinal microorganisms . Therefore, if cyanogenic precursors are consumed, cyanide may be liberated within the intestinal tract of the consumer.

The simple solution then is to deliberately try to avoid exposure where you can. For the brewers and mead/cider makers, this means being acquainted with your ingredients, avoiding seeds of the culprit plants, and, when imbibing in others’ products possibly containing such seeds, do so with caution.

It is known that cyanide exists in many fruits and vegetables commonly used by the homebrewer. Table 1 is a list of common fruits and vegetables that may be a source of cyanide. The brewer should be cautious when any of these are used. If the fruit or vegetable has already been processed when purchased, it is in the brewer’s best interests to find out the conditions of the processing to determine whether cyanogenic compounds may be present in the product.

So, in conclusion, here are the take­ home messages in regards to cyanide and homebrewing:

We’ve tried to avoid scare tactics here due to the inherent complexity of determining quantities of cyanide across various fruit and extraction, individual differences of the consumer and the like.The bottom line is that we need to know more about our ingredients and try to moderate or  eliminate  that  which  is not healthy. We’ve all probably had more exposure to cyanide and other dangerous things than we know and, consequently must question whether negative effects have actually taken place. Nevertheless, a word to the wise will hopefully be sufficient. Remember, like everything, the dose makes the poison. As a certain FDA employee used to say, ‘Our job here is to protect normal people, fools, and some damn fools-but not goddamn fools!’ (Schneider pg 72).

Joe Formanek has been a homebrewer for 12 years and a founding member of the­ Boneyard Union of Zymurglcal Zealots (BUZZ) In Champaign, IL He Is a BJCP National judge and the 1999 Midwest Homebrewer of the Year. He recently won the 2000 AHA Nlnkasl Award and was also blessed with the arrival of his baby daughter, Veronica.

Dick Van Dyke is a founding member of Brewers of South Suburbia (BOSS), a BJCP National Beer Judge and past Gold Medal winner in the AHA National Homebrew Com­petition. He currently enjoys a second career as a brewery representative for 3 Floyds’ Brewing Co.