Nearly 10 years ago, Michael Tonsmeire brewed his first batch of beer in a student-taught class at Carnegie Mellon University. Now, he’s written American Sour Beers, has a cult following on his blog, The Mad Fermentationist and consults for Modern Times Brewery in San Diego.

We had a chance to talk with Tonsmeire about his life in beer—and managed to get a recipe out of him, too!

I brewed my first batch nearly 10 years ago during my senior year at Carnegie Mellon University. It was an English-y brown ale I made with my friend Nicole that came out much better than our second—a poorly conceptualized vanilla cream ale.

I’d been an avid home cook/baker for a few years, and my interest in craft beer brought homebrewing onto my radar (I think the infamous episode of Good Eats may have been the first spark). I took a student-taught class called “Beer Brewing and Appreciation,” and that was that, I was hooked.

When did you know this was no ordinary hobby, but an obsession?

I drove freshly-brewed wort 500 miles from my apartment in D.C. to my parent’s house in Massachusetts where there was room for it to ferment and age.

What spurred you to start your blog, the Mad Fermentationist?

After I moved to D.C., I didn’t really have anyone to talk about beer with. The blog was my outlet, as well as a convenient way to give people recipes when posting on homebrewing forums. It wasn’t some big plan, just a way to alleviate boredom and keep myself honest.

When did you join the AHA?

I joined in 2010, shortly before entering the National Homebrew Competition for the first time. I’m entering again this year.

What beers are you entering in this year’s National Homebrew Competition?

I haven’t decided. I really need to go down to my basement and see what I can put in bottles. A good guess would be sour beers. I’ve got a Flemish red that was primary fermented with red wine yeast that took a few years to come into its own. I’m also really happy with a recent Gueuze, too, because it was my first time fermenting with only bottle dregs.

Why didn’t you pursue a job in the beer industry?

I did for a couple years after college, but I eventually decided I’d rather have an unrelated job and a fun hobby. At a certain point, anything you do for money becomes a “job.” I’ve known several people who have gone into the industry only to leave a few years later because they’re burnt out. Eventually the right opportunity might come along, but so far I’m happy consulting for Modern Times, writing, blogging, etc.

Can you elaborate on your consulting work for Modern Times? 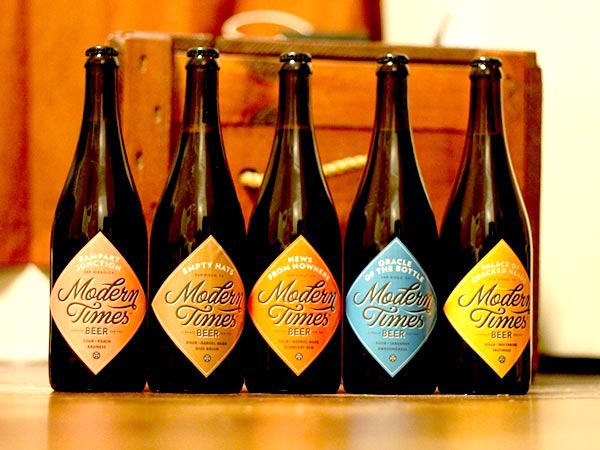 My title with Modern Times is Flavor Developer. My role for the first 18 months (prior to production) was to brew test batches at home. Jacob McKean, founder of Modern Times, and I discussed the general direction of the recipes. I’d write a recipe, brew, counter-pressure bottle and ship him samples. We’d tweak them and I’d brew again.

Once they opened the facility, I spent two months in San Diego getting the brewery and tasting room up and running. My time was spent growing microbes for the sour beer program (our first few were just released), brewing test batches for the tasting room and various odd jobs. I still go out there for events. We’re planning a sour beer event this year to coincide with National Hombrewers Conference being held in San Diego!

What turned you towards your sour beer obsession?

I was interested in sours my first year and a half of homebrewing, but was scared off by suggestions that it would guarantee everything I brewed afterwards would be sour. I had a couple months off before a new job started and decided I’d brew four sour beers to age at my parents’ house while I was apartment hunting in D.C. As soon as I was settled, I started some quicker turnaround 100% Brett beers.

Why did you write the book on sour beers? 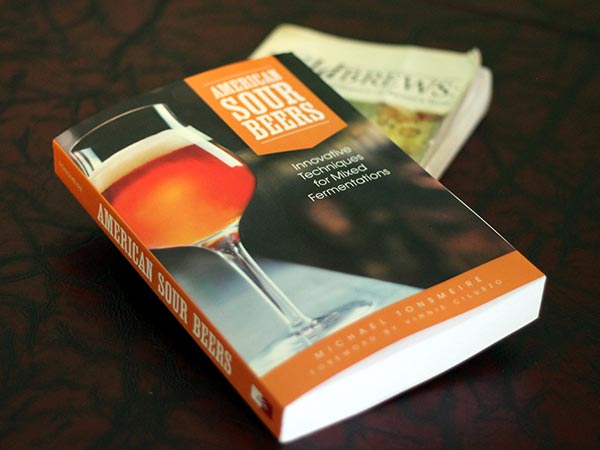 I originally just wanted to condense what I’d learned while writing the blog into a single block of consistent information. I saw a gap for a book that focused on the practical aspects of brewing sour beers, rather than the lore and personalities.

When I talked to a few brewers for an article I was writing for Brew Your Own, I wanted more information out of them for the book. They were so helpful and cooperative, so I kept asking questions of other people with specialties. By the time the manuscript reached 140,000 words, I knew I had to find a publisher, luckily Brewers Publications was my first and only contact.

I’m lucky. I’ve made great friends who have shared all sorts of beers I never thought I’d have the chance to try. The more I drink beer, the more I realize that no beer is going to be that much better than the second or third best beer with similar flavor. I wouldn’t say no to a glass of Hill Farmstead Ann, 3 Fonteinen Framboos or Alesmith Speedway on Coconut and Vanilla, but I’m not going to take out a second mortgage to secure a sample. I’ve tried to brew something along the lines of a beer I haven’t tried. Sometimes I’m close, others, not so much.

What are your favorite craft breweries?

I’m a big fan of specialization. I love breweries that focus on a handful of categories and really excel at them. Those that are clearly driven by passion for flavors, rather than by the marketing team. Those that have high standards and are willing to dump beer that doesn’t live up to them. Russian River, Hill Farmstead, Firestone Walker, Jester King and Alpine all fit that bill. 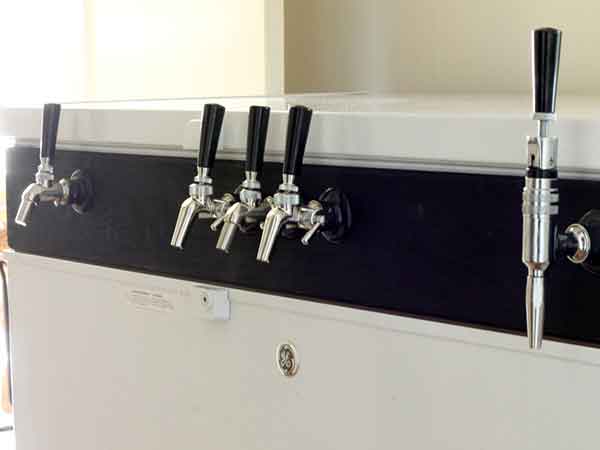 My friend Matt and I just built a collar for my new larger 5-tap chest freezer-kegerator. Our previous project was a 10 foot tall trebuchet our senior year of high school. Wood working isn’t one of my talents, but it’s something I’m becoming more interested in.

I know you love sours, but what is your favorite style(s) to brew?

Hoppy beers. So many commercial hoppy beers end up so badly oxidized by the time I buy them. Homebrewing allows you to control the freshness, which is so important for that bombastic fresh hop aroma. I love keg hopping, too.

I’ll likely never brew a light lager or a 15%+ ABV beer. I see both in a similar way: technical challenges that I have little interest in drinking.

Have you ever had a homebrew mistake that turned out great? 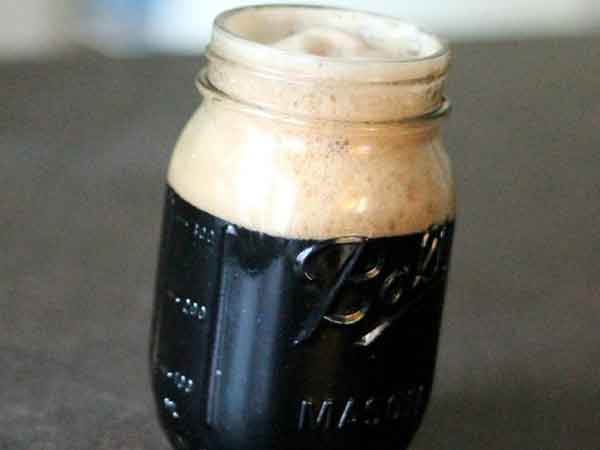 Recently, my brewing has been pretty clean, but early on I had plenty of botched batches and some of those (surprisingly) turned out great. Our group’s first bourbon-barrel-aged beer was supposed to be a wee heavy that ended up a 40 point scoring “imperial” oud bruin. That barrel was touching a red wine barrel Flemish red. When the wee heavy started to sour after a few months, we rolled with it and pitched all sorts of sour beer bottle dregs.

Describe your brew system and set up.

I recently switched to a new rig after using most of the same gear for nine years. Two 20 gallon MegaPots. I use one with a false bottom to heat all the water, I dough-in, then recirculate with a March pump for a few minutes, rest until conversion is complete, recirculate again, and then pump over to the kettle. For stronger beers, I’ll add a few gallons of cold sparge water. After the boil, I whirlpool through a plate chiller, settle and then chill on route to the fermentor. Only takes 4-5 hours to produce 10 gallons of wort.

The biggest mistake I see new brewers making is trying to hard to be like advanced brewers—skipping right to all-grain without working out the fermentation kinks with extract batches, using liquid yeast when they aren’t ready to make starters, etc.—while at the same time ignoring the little things that make a big difference like using a priming calculator instead of dumping in the full 5 oz of priming sugar that came with a kit.

This recipe was brewed with my neighbor, a priest, for his church’s Easter Vigil. I was expecting him to request a light wheat beer, but instead we opted for a Belgian quad with a couple ingredients mentioned in the Bible (pomegranate and cardamom). I’m not religious, but it was delicious.