Editor’s Note: “So I Married a Homebrewer” appeared in the September/October 2007 issue of Zymurgy.

It’s an odd question, really, but I doomed myself to forever encounter it by writing a story about my betrothal to a homebrewer. People didn’t actually read that, did they? I discovered the hard way that getting something published results in the rather unique situation of having people actually read the things I write.

Yes, homebrewers read the stuff in magazines that don’t have recipes attached. I didn’t realize they stopped brewing long enough. Apparently, brewers’ spouses, when left alone during long boils, also read those same magazines. There I stumbled into a receptive audience. I was not the only one swimming in the detritus of the beer geek.

Did I slip that in well? Yes, thanks to the crappy home market and the generosity of my parents, we finally have a little brewery to call our own. We found a very understanding realtor. It was easy to do. I just told each and every one that my husband made his own beer. Most fiddled with their little “r” pins and looked confused. A few looked frightened. One told me it was the weirdest thing he’d heard. The winning realtor was the one who asked right away if she could have a bottle. Note to all realtors: If a potential client tells you they make their own alcoholic beverage, don’t run screaming or ask if it’s legal, and you’ll end up with a job and a lot of free beer. Or wine. Or moonshine, I guess, but I’d advise keeping that under wraps. There’s some sort of law against distilling spirits at home.

Properly plied with homebrew, your realtor should be able to find you a number of fabulous homes to consider. In fact, they’ll keep finding you homes until you threaten to cut them off, and then they’ll help you settle on one. Ours took only a year to find. It was a fabulous little house on “short sale.” This means it only took six more months to convince the bank to take our offer.

The house is wonderful. The dog has a backyard. The dog is in love with the fact that he no longer has to go down three flights of stairs to pee. It has made an immense change in his life. I imagine it would in anyone’s, really. The first trip was a revelation. I opened the back door and led him out. He was confused, at first. What, you mean I can just go here? Right outside the door? He looked over the rough grass with awe. He had found the promised land. He rarely wants to go out back for any other reason. A lot of people find that odd, but it makes sense to me. Seriously, he pees out there, among other things. Would you go into your bathroom just to hang out? 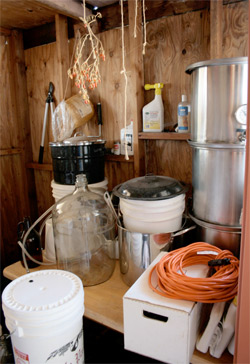 My husband has a huge concrete slab with a drain in it. This is vital. A house without a brewing area is a poor home indeed. Those who are crazy enough to buy their own beer—and yes, there are nuts out there that actually do—will never understand this necessity. In past times, every home had a place to brew beer. Builders wouldn’t think of building a home without a place to brew beer. Over time, that fell out of the building code. Today, absolutely tons of houses and condos are built without any place to properly hold a brewing rig, also known as a “sculpture” by those who have had a few. Their wives call it something else.

I have the kitchen of my dreams. I swear, it’s perfect. Huge. Big enough so that I hardly ever trip over the bottling lines. Hardwood floors that hide wort stains. Vast granite countertops that withstand even the hottest kettle. Stainless steel appliances that I can easily scrape the mash from. A massive gas range upon which I can cook huge meals for his club board meetings.

In reality, I have managed to keep most of the brewing away from my dream kitchen. It really isn’t all that hard, girls (or guys). Marriage takes work and love and dedication, and with enough of all three, a homebrewer and non-brewer can live together in perfect harmony.

Step one is to sit down and have an honest conversation with your significant brewing other. Using lots of “I” statements, let him or her know that you love and support him or her, that you find his or her creative expression in grain and yeast a joy, but that you really would be so much happier if he or she would just express themselves outside. Hold his or her hand. Look deep into his or her eyes. It would probably help if you chose a gender by now, and hopefully you chose the right one for you. Not that I’m judging! Ha, ha! Just be sure to keep everything open, honest, respectful and loving.

Never go to bed angry, though. This is good advice. Of course at times even the best advice must be ignored. You have to sleep eventually, right?  Still, in our marriage, I have learned to mend fences after the occasional tiff or encore of step two. I really do love my husband, more than red velvet cake, even, and would rather be with him and the beer and endure the occasional battle at my kitchen door than live alone. He makes my life complete, and he puts up with my eccentricities, which you can read about in whatever magazine he submitted them to when I wasn’t looking.

Buying a few propane burners will help in this, trust me. In fact, I find buying propane burners solves many problems and reduces marital stress. You may well ask, “How does a propane burner fit into a good marriage?” The answer is, I don’t know, but it keeps him away from my stove. So I keep buying them. The clerk at the local barbecue store assumes I fry flocks of turkeys every Thanksgiving. On my last burner-buying trip he asked, “Family visiting for dinner?”

“Oh, it’s just me and my husband this year.” I smiled and signed the receipt. I’d tell him the truth, but then I’d have to stop him from coming over every night after work. 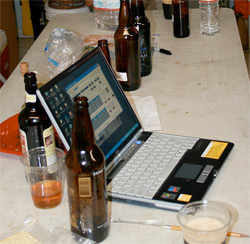 A side benefit of having our own home is all that extra storage. There are enough closets for almost every keg, carboy, and case of beer. We’re hoping to one day add on so we can put our clothes away. There’s space enough next to the beer fridge and boxes of empty bottles in the two-car garage for my car, and I’ll tell you, a Miata takes up more room than you think. I can usually get in with the top up. One day, I may even be able to back it out!

Wait. “Beer fridge?” As in, a refrigerator just for beer? Not the kegerator. It broke down, so we donated it to the young guys in the apartment next to ours. The ones who promised to help us move then disappeared when we pulled up in the rental truck. A blessing and a curse in one, it will be so awesome for dudes like them, but they’ll have to figure out what’s wrong with it and fix it first. We never could. It just laughed at us when we tried.

We actually have a second refrigerator in the garage just for beer. We pay to run an extra refrigerator so we can keep more beer cold. It is absolutely crammed with tall metal cylinders and almost-as-tall metal cylinders. Plus, I think a few wedges of cheese I put in there and now can’t get to. Now, I know there are people out there who read that without raising an eyebrow. To you, I say, you’re darn weird. At least twitch something in sympathy. An eyebrow, or a nose. Every time I see the electricity bill, I feel the need for a cold one, which I suppose makes an odd sort of sense.But I did marry him for better or worse, for richer or poorer, for stout or IPA. And so the extra refrigerator will stay, Corny kegs inside. At least they’re out of my bathroom.

Diana Davis has been happily married to a homebrewer for five years. Before that she lived with him for over 10. She teaches Special Education in the San Fernando Valley and is happy to come home to a guy who makes his own beer after a long day of other people’s children.