The brining technique is different than simply marinating or salt curing a meat or poultry product. By submerging a protein (turkey, chicken, Cornish game hen) into this liquid medium, it allows the properties of osmosis do its work, resulting in flavoring the protein from the inside out. Crafting a liquid with the right balance of sodium, sugar and flavors (in this case craft beer with some herbs and vegetables) becomes the basic medium. The natural moisture in the protein is replaced with flavors of the brine that also hydrate the meat, increases the tenderness by denaturing the proteins, helps preserve the ingredient and provides a temperature cushion, preventing the main course from drying out.

This recipe is for your classic oven roasted turkey. It yields just over a gallon of brine, enough for a 16 to 24-pound turkey.

Serves: 8-16 people, depending on the size of the bird

At least 2 days in advance of Thanksgiving (or event/Holiday), start the brine. In a large pot, over high heat, add the water, salt, sugar, peppercorns, bay leaves, thyme, onions, celery, carrots, garlic, lemon and orange. Bring the liquid to a boil and simmer for 10 minutes to infuse the flavors together, dissolving the salt and sugar. Turn off the heat and let the brine cool for 20 minutes, and then add in ice and beer of choice. Mix the ingredients together and take the temperature of the finished brine. A thermometer should read 40°F/4°C or lower to be safe to use. It may be helpful to place the pot into a refrigerator or kegerator until 40°F/4°C is reached.

Take the fresh turkey and remove it from its package in a large sink. Remove the neck, gizzards and liver, setting aside (for stock or gravy). Rinse the bird under cold water, turning the bird over a few times, washing any blood from the cavity and under the neck flap. Remove any remaining quills from the skin, if visible. Turn off the water and lightly dry the turkey off with paper towels.

If you have room in a refrigerator or kegerator, have ready a large food grade bucket, large stock/brew pot, a brining bag or extra-large Ziplock® bag. Place the turkey into the container of choice, then top off with the chilled brine, submerging the turkey completely. Then, place the container with the turkey in the beer brine into cold storage.

If cold space is an issue, use a large cooler and sanitize it with a bleach water solution or Star San. Another alternative is to use a large heavy duty plastic bag or Ziplock® bag. Place the turkey in the cooler or bag and cover with the brine. Use gallon size sealable bags fill with ice, to keep the bird and brine ice cold, but not diluting the salinity or flavor of the brine.

Beer brine the turkey for at least 24 (for a smaller 16 pound bird) to 48 hours (for a larger 22+ pound bird). Keep the turkey and brine cold during this marinating process. Every 12 hours, rotate/flip the turkey in the brine to marinate it evenly.

Remove the turkey from the brine and dry well with paper towels, both inside and out. Repeat this several times, to get as much of the moisture removed. This will help the browning of the skin as moisture will steam the skin instead of roast it. Place the turkey, back side down, in a roasting pan fitted with a rack. Place the bunch of sage inside the cavity, as the herbs will release their aroma into the meat as it roasts. Let the turkey sit at room temperature for 2 hours before being cooked. This will let the turkey warm up, allowing it to cook more evenly. Discard the brine, as it has done its purpose and not safe to re-use. 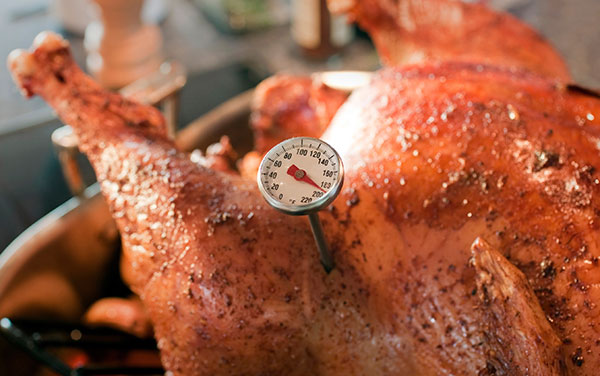 Pre-heat the oven to 350°F/177°C, convection roast/bake if this setting is an option. Truss the bird with twine, to help hold its shape and to aid in cooking the turkey evenly. I highly recommend using a temperature probe to make sure the turkey is cooked to a certain temperature (160°F/71°C) verses a length of time. Insert the probe into the middle of a breast or in one of the thighs. Make sure the tip of the probe isn’t touching a bone, as the temperature reading will be false. If you don’t have a probe thermometer, a 16-20 pound turkey should take between 3 and 3 1/2 hours to cook fully to 160°F/71°C. Check both the breast and the thigh temperature to make sure the turkey is evenly cooked. Other recipes describe cooking a turkey until the internal temperature reaches 180°F/82°C and this is one reason for a dry turkey. Turkey is safe to eat after it reaches 165°F/75°C. Its fine to remove the turkey from the oven at 160°F/71°C, as the heat of the oven and the surface temperature is higher than the internal temperature. As the turkey rests, the carry over heat will finish cooking the turkey and bring it to a safe final cooking temperature of 165°F/75°C.

Let the turkey rest at room temperature for 20-30 minutes before carving. This is critical in keeping a moist and juicy turkey. This resting will relax the muscle fibers, helping re-distribute the juices and allow the bird to be easier to handle when carving. Cover the turkey with a large sheet of aluminum foil.

How to Make Beet Kvass

You Can Ferment That: Quark

How to Make Cream Cheese at Home