Trappists, more formally known as the Order of Cistercians of the Strict Observance, are a Roman Catholic contemplative order with history that stretches back hundreds of years and roots long before that.

The monasteries of Trappist monks and nuns are affiliated with the larger Cistercian family, which traces its origin back to the late 11th century. In 1098, Saints Robert, Alberic and Stephen founded the monastery of Citeaux outside of Dijon, France with the purpose of refreshing the institutional forms of monastic life and returning to a stricter following of the the Rule of Saint Benedict.

The Rule of Saint Benedict, written in the 6th century, maps out the expectations of Trappist monks and nuns with an emphasis on authentic poverty and simplicity in the liturgy, manual work and non-involvement in secular affairs. The rule dictates the day-to-day life of Trappists, including much spiritual reflection and observance along with a balance of work, reading and study.

Additional reforms occurred throughout the history of the Trappists, including one near Normandy, France during the 17th century led by the Abbot of La Trappe in hopes of returning to a more purer following of the Rule of Saint Benedict. This is how “Trappist” name came to be. 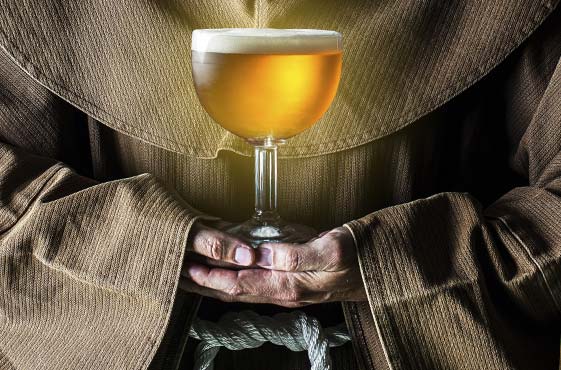 Beer is among one of the most well-known Trappist-produced goods used to support the monastery producing the beer and fund its charitable endeavors. It’s important to note that the beer is not intended to turn a profit, but rather to generate income that can be used to fund the monastery and local community.

It is believed that beer was being brewed in monasteries as early as the 6th century. In its earliest history, Trappist beer acted as a form of potable water. Eventually, Trappist beer was made on larger scales with the intent of sharing it outside of the monastery walls. In many instances, and even still to this day, many Trappist beers must be purchased on the grounds of the Trappist brewery or at nearby markets. Some even say that it is the Trappist brewers who started spreading their knowledge of beer and brewing procedures that helped spur the growth of secular commercial brewing ventures.

But despite the prominence of beer in the Trappist community, it is important to note that monks always put religion first over everything else–even beer. In other words, it’s always “an abbey with a brewery, and not the other way around.” The beers being made in Trappist breweries are intended to nourish the Trappists and their visitors, and also support the financial needs of the monastery and its charitable efforts.

[DISCOVER the different between Abbey and Trappist beers]

In many instances, the monks of a monastery don’t have the time to dedicate to both the Rule of Saint Benedict and running a brewery, so it is not uncommon for a monk to be appointed to oversee brewing operations, but the actual day-to-day brewery tasks are taken on by hired, secular help.

In order to prevent non-Trappist commercial companies from using the Trappist name, eight Trappist abbeys got together and formed the International Trappist Association (ITA) in 1997. To become a member of the ITA, prospective abbeys must go through a rigorous application and evaluation period.

ITA-recognized monasteries are allowed to use the “Authentic Trappist Product” logo to legally and legitimately identify themselves as a Trappist abbey that produces Trappist goods. Furthermore, authentic Trappist products must abide by certain criteria to use the logo.

The following timeline is taken from Brew Like a Monk: Trappist, Abbey and Strong Belgian Ales and How to Brew Them by Stan Hieronymus.

Sources: Brew Like a Monk: Trappist, Abbey and Strong Belgian Ales and How to Brew Them by Stan Hieronymus; Great Beers of Belgium (Sixth Edition) by Michael Jackson; International Trappist Association website; Order of Cistercians of the Strict Observance website; The Oxford Companion to Beer by Garrett Oliver et al.