This is part 3 in the Style of the Month: Trappist Ale series (part 1). See part 2 to discover the history of Trappist monasteries and breweries.

In 1950, Saint Joseph’s Abbey was founded on the crest of sloping hill blanketed in trees just north of the town of Spencer, Massachusetts. The Roman Catholic monastery is home to the monks of the Cistercian Order of the Strict Observance, which you may know better as Trappists.

It is common for Trappists to produce goods and provide services to help fund their monastery and support charitable efforts. Since 1950, the monks at Spencer Abbey have packaged jams and jellies for such purposes, but it wasn’t until more recently that the Massachusetts abbey decided to pursue brewing traditions that have long been rooted in the Trappist monasteries of Europe.

After spending much time researching brewing practices and visiting some of the most well-known Trappist breweries, Spencer Trappist Brewery opened its doors in 2013 becoming the United States’ first, and currently (Editor’s note: this article was originally published in August 2015) only, ITA-recognized Trappist brewery.

We had a chance to speak with Father Isaac, Director of the Spencer Brewery, and we asked him for a few Trappist brewing tips to share with homebrewers.

Before jumping into the homebrewing tips, Fr. Isaac made it a point to emphasize that “Trappist” is not so much a specific style of beer, but simply designates the place where a particular ale was brewed, in this case in a Trappist monastery with a living community of monks.

“Because of the monks’ traditional passion for excellence in brewing, ‘Trappist’ has come to be associated with the highest standard of quality in world beer culture,” shares Fr. Isaac, “…however [it] is not a particular style of beer.” 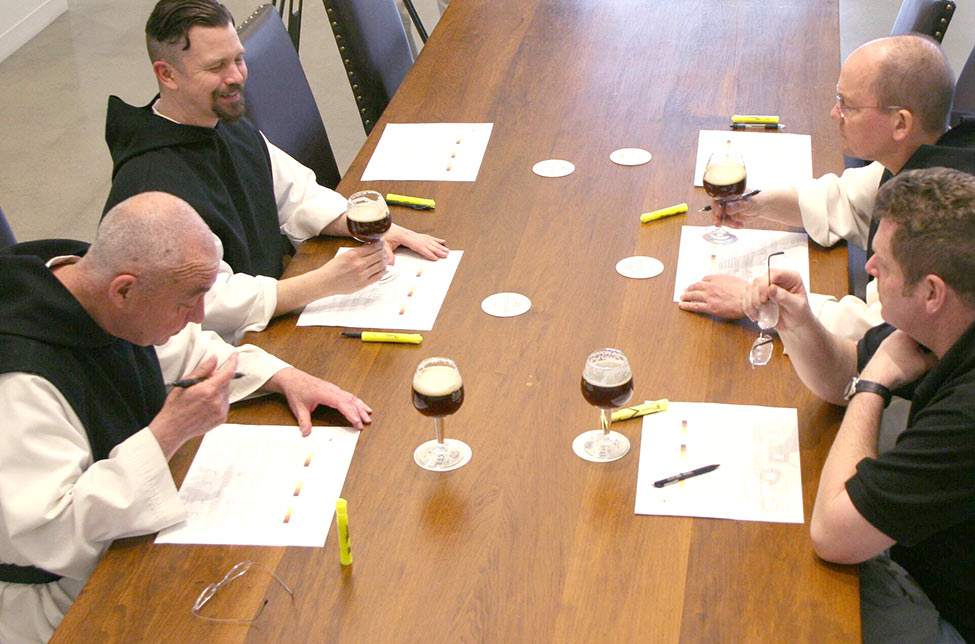 After having a meeting with the brewery’s team, they compiled the following tips for homebrewers:

1. Indulge your passion for excellence.

Trappist breweries hold their place in world beer culture because they refuse to compromise on the quality of the ingredients, state of the art technology and continuing education. This combination allows for consistency which is the foundation of excellence in quality.

Buy the best equipment that fits in your budget, and buy the best, freshest ingredients. K eep meticulous records of each brew and provide ample time so that you can brew and clean up in peace. Expect to brew your new recipe 15 or more times, modifying only one detail at a time, evaluating the results, until you achieve you arrive at your dream beer.

…especially the malt bill. We typically use a combination of two and six row Pils plus a Caramunich malt to adjust the color of the ale. Go for fresh and high quality malt rather than exotic. The delicious Belgian malt flavor profile comes more from the rests in the mashing than from special, difficult to source, expensive malts.

When asked by an American craft brewer why he didn’t use multiple yeasts to effect the fermentation, a 50 plus year old Trappist brewer replied that he had spent his whole life studying this one yeast, and only now did he believe he was beginning to understand it in some depth. Choose a top-fermenting yeast from one of the major labs, perhaps  a Wyeast 3787 or 3538 or some other yeast with a clove, fruity, banana and related ester profile of by-product flavors and patiently befriend this yeast. Attend to fermentation temperature (25°C +/- 1) for the primary fermentation, 20°-22°C for the secondary fermentation over three weeks).

A key differentiation of Trappist in particular and Belgian ales in general is the harmony of the several ingredients and fermentation by-products that impart flavor to the beer. The core principle is that no one element should dominate, especially not the alcohol; rather the malt, yeast, hop and water elements are so naturally balanced that the final flavor profile is layered, complex, difficult to pull apart analytically, with an intriguing aroma and finally, delicious. A symphony of taste sensations!