Of the numerous off-flavors that can be present in beer, dimethyl sulfide (DMS) is one of the most common, at least based on how often it gets cited during beer evaluations. Thanks to the hard work of those who came before us, brewers of today have a fairly decent understanding of what causes DMS in beer such that we’re able to employ certain methods to avoid it, most of which come into play during the boil.

While it is generally recommended to boil wort for at least an hour, prior xBmts have produced results suggesting that a Pale malt based beer and a Pilsner malt based beer boiled for 30 minutes were indistinguishable from the same beers boiled for 60 and 90 minutes, respectively. Since we know the S-methylmethionine (SMM) is abundant in malt and that it is rather easily converted to DMS during the mash, these findings were somewhat bewildering and got me wondering about another “rule” any homebrewer with more than a couple batches under their belt is well aware of. According to the book named after what it taught many of us,

Once you achieve a boil, only partially cover the pot, if at all. Why? Because in wort there are sulfur compounds that evolve and boil off. If they aren’t removed during the boil, they can form dimethyl sulfide which contributes a cooked cabbage or corn-like flavor to the beer. If the cover is left on the pot, or left on such that the condensate from the lid can drip back in, then these flavors will have a much greater chance of showing up in the finished beer. (How To Brew, Ch. 7 – 2)

Despite John’s equivocalness in stating that boiling with the lid on merely increases the chances of DMS being an issue, many of us accepted the practice as a beer death sentence. I know I did, it just made sense that DMS rich condensate being allowed to drip back into the boil would lead to a beer with noticeable levels of said off-flavor. While boiling without a lid is a no-brainer for most, I was inspired to test it out due to the rising popularity of counter-top brewing systems where the boil occurs in an enclosed space.

Considering the variable, I thought it’d be best to brew a clean and minimally hopped beer with a relatively high malt content, and with the recent release of Sierra Nevada’s delicious seasonal Oktoberfest, I was inspired to make my first ever Festbier.

Since I’d be kegging different xBmt beers while brewing this batch, I decided to use fresh yeast slurry, hence no starter necessary. After collecting my water and adjusting it to my target profile the night prior to brewing, I weighed out and milled the grain for a single 10 gallon batch. 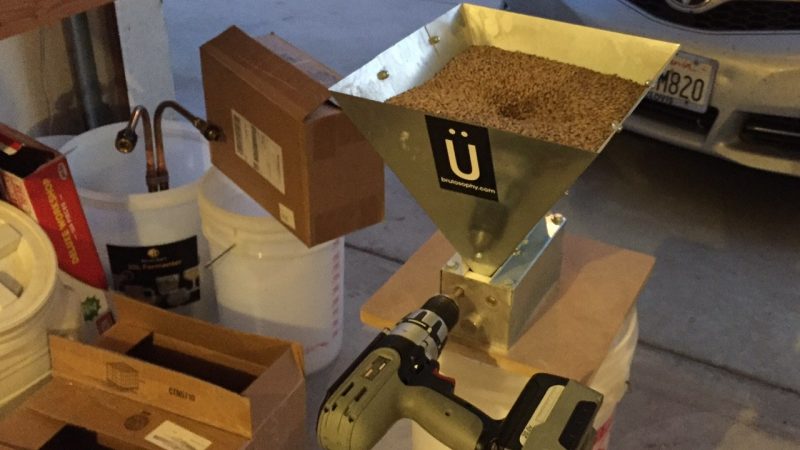 The following morning, I awoke to the sweet sounds of Hall & Oats’ Sara Smile, flipped the switch on coffee maker, and hit the flame under my kettle of strike water. 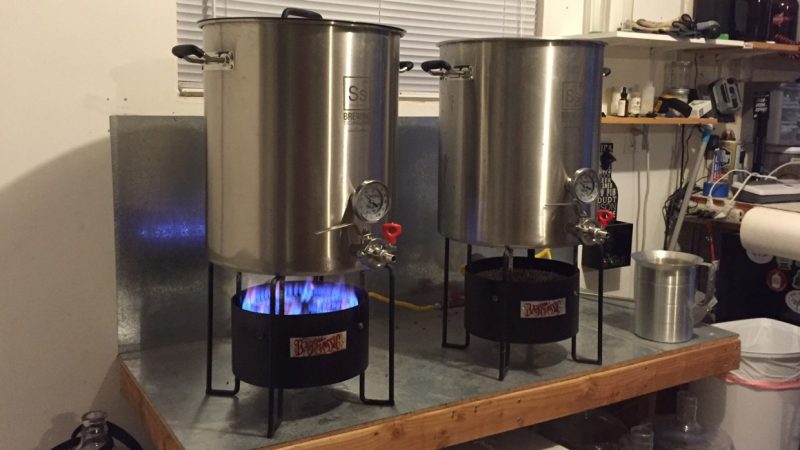 It took about 15 minutes for the water to reach a few degrees warmer than the strike temperature suggested in BeerSmith, at which point I transferred it to my MLT for a brief preheat before mashing in to nail my target mash temperature. 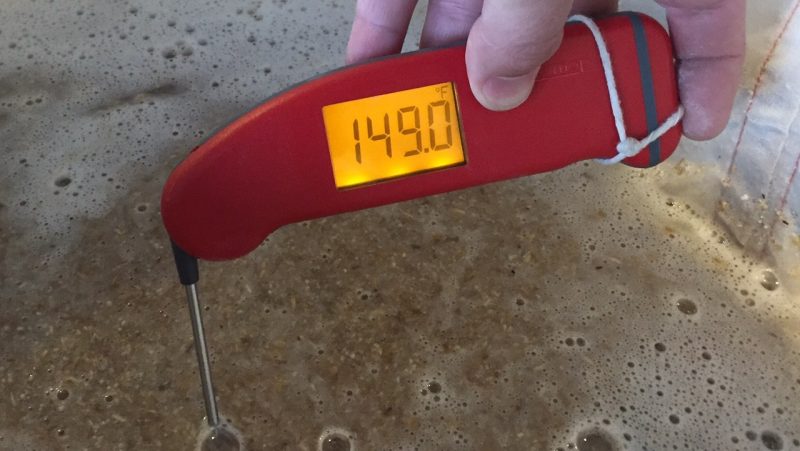 I let the mash rest for an hour, stirring 3 times throughout, then began collecting the sweet wort. 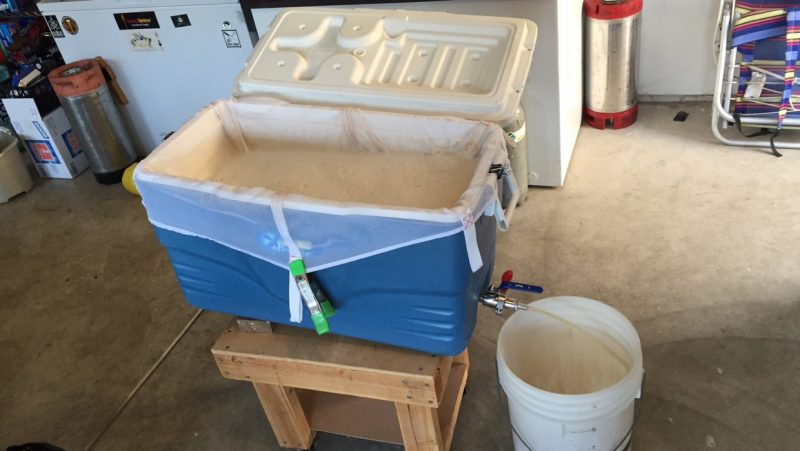 Following a quick batch sparge, the full volume of sweet wort was stirred in a single kettle to ensure homogenization before I transferred an equal amount to a second kettle. 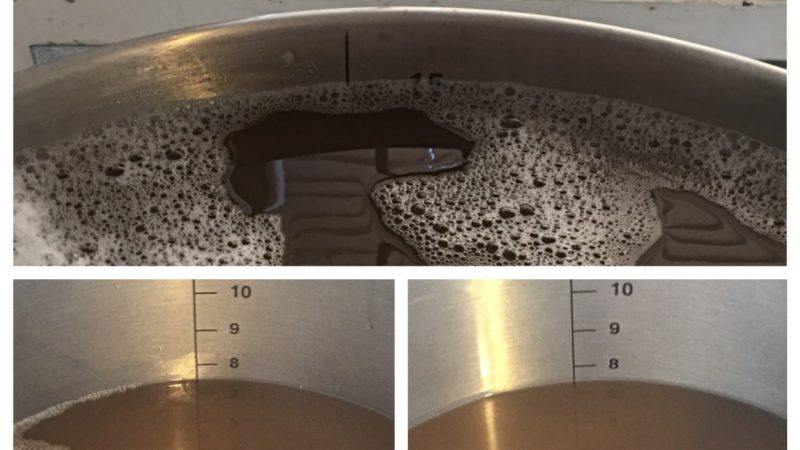 Refractomer measurements from both batches at this point showed they were at exactly the same pre-boil SG. To ensure a seamless brew day, I started the boil on the lid-off batch 20 minutes before the lid-on batch, leaving a lid on the kettle the entire time. Eventually, both batches were boiling at the same time. 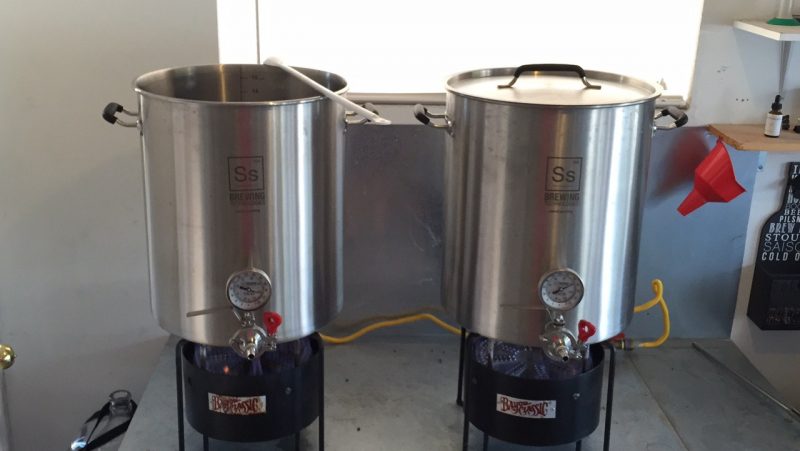 I fully expected to see some steam escape between the seam of the lid and kettle, and that’s exactly what I observed throughout the entire boil.

I also expected the condensate dripping back into the wort to more than make up for most of volume lost through escaping steam. Imagine my surprise when I discovered the boiloff rate for the lid-on batch was exactly the same as the lid-off batch. 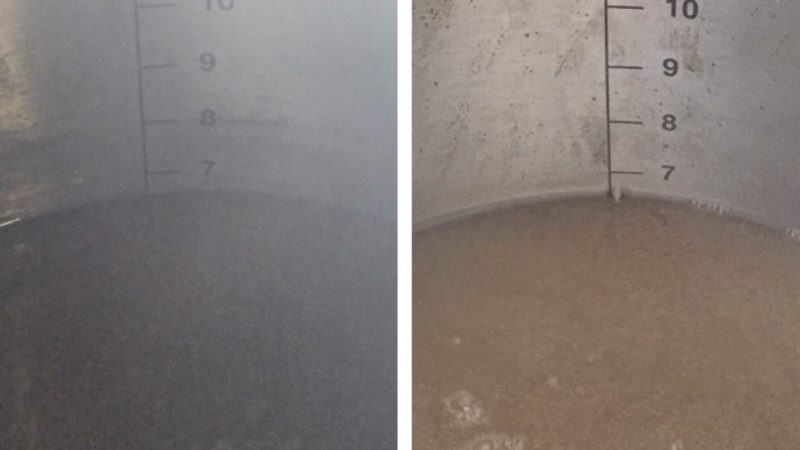 Over the course of the 1 hour boil, I removed the lid twice for no more than 3 seconds only to shake the condensate into the wort. Weird. I proceeded to quickly chill each batch to a few degrees above my groundwater temperature. 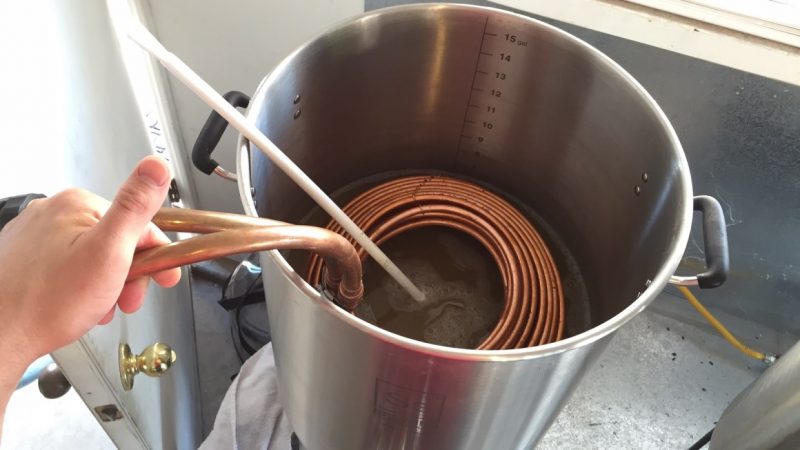 Refractomer readings from each wort revealed a very slight difference, which despite the post-boil volume similarity, made me wonder if the lid being on didn’t have some sort of impact. 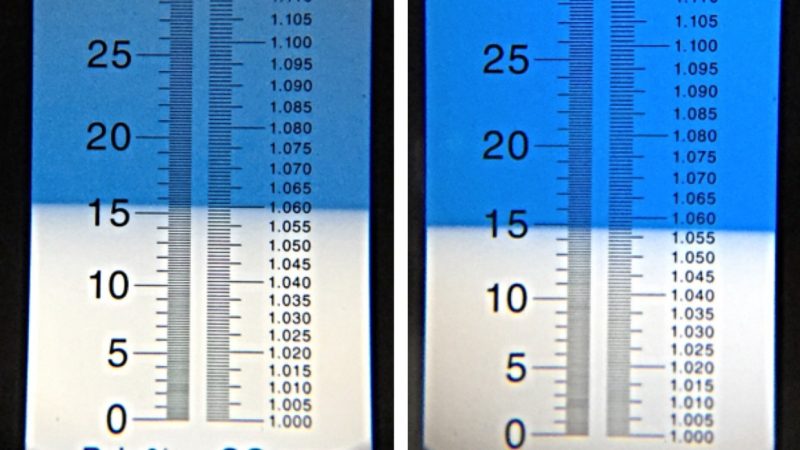 Each wort was racked into a fermentor and placed in a cool chamber to finish chilling to my target fermentation temperature of 55°F/13°C. I returned a few hours later to find both worts had stabilized at my set temperature then proceeded to pitch equal amounts of yeast slurry into each fermentor. Both beers were observed fermenting with similar vigor the following morning. I raised the temperature of the chamber to 70°F/21°C after 4 days of activity. While both beers showed signs of diminished activity a couple days later, it seemed the lid-off batch developed a much larger kräusen. 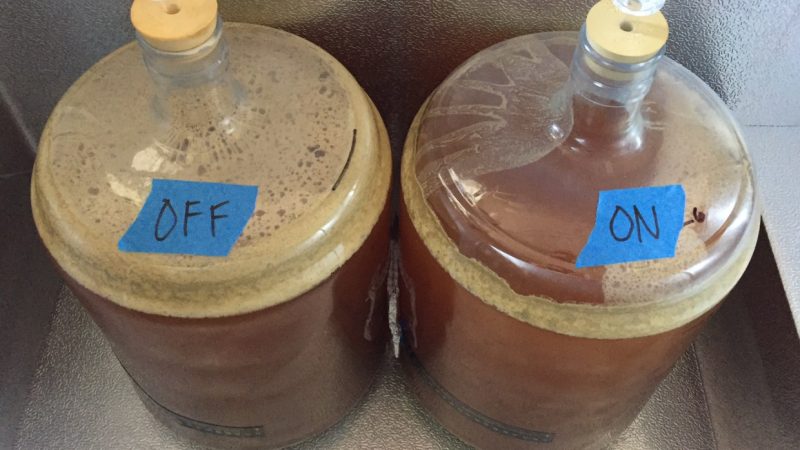 I took an initial hydrometer measurement at 9 days post-pitch that matched a reading 3 days later showing a very slight difference between the beers.

Following an 18 hour cold crash, I fined the beers with gelatin and kegged them  a couple days later. 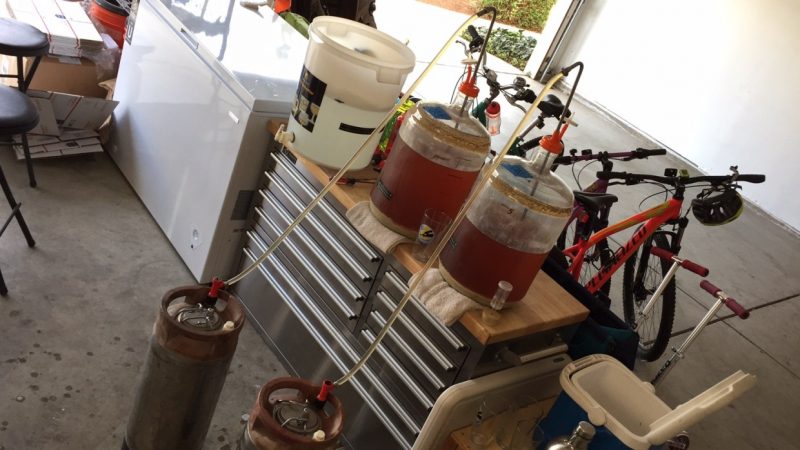 The filled kegs were placed in my cool keezer where they were burst carbonated overnight then left at serving pressure to condition for another week before data collection commenced, a point at which the beers shared a similar appearance. 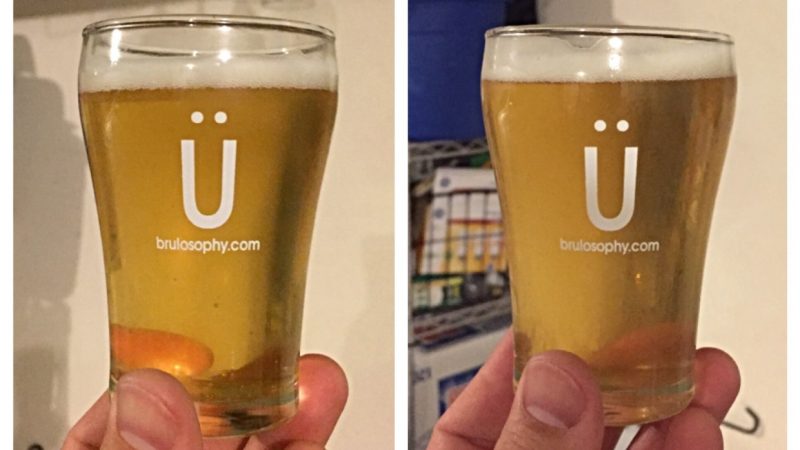 A total of 20 people of varying levels of experience participated in this xBmt. Each participant was served 2 samples of the lid-on beer and 1 sample of the lid-off beer then asked to identify the sample that was unique. Given the sample size, 11 tasters (p<0.05) would have had to correctly identify the lid-off beer as being different in order to reach statistical significance. A total of 8 tasters (p=0.34) accurately identified the unique sample, indicating panelists were unable to reliably distinguish a beer in which the wort was boiled with the lid on from the same beer in which the boil occurred with the lid off.

My Impressions: Biased by my performance on the DMS off-flavor xBmt where I was easily able to identify the intentionally dosed beer over many trials, I was convinced this was going to be a piece of cake. In fact, in a non-blind sampling of both beers the night prior to my first data collection session, I was pretty certain I perceived a difference, subtle though it was. The following day, after witnessing many people fail to distinguish the unique sample, I asked a taster to set me up with a triangle. Sure enough, when blind to which beer was in which cups, despite fully knowing what the variable was, I couldn’t tell the beers apart at all, they smelled and tasted exactly the same. I did this 5 more times over that weekend with similarly unreliable performance.

It’s only natural to wonder why the results are the way they are, though based on the data collection methods we use, we’re unable to provide any conclusive explanations. But we can certainly speculate. I can’t help but wonder how much DMS is actually contained in the covered kettle during the boil compared to how much escapes through the opening between the lid and kettle rim. Throughout the 1 hour boil, it was quite clear rather massive amounts of steam were indeed leaving the kettle, and it’s probably safe to assume it carried some DMS with it. Another potential explanation is that the lid-on beer did in fact contain a higher level of DMS than the lid-off beer and tasters simply were unable to detect it. Considering the fact participants from the recent DMS off-flavor xBmt were unable to reliably distinguish a beer intentionally dosed with DMS to over triple the standard threshold, this theory doesn’t seem all too far-fetched.

Then again, it could simply be that both beers shared similar amounts of DMS, which would likely be very low based on prior lab data showing a Pilsner boiled for 30 minutes had none. Either way, I’ll continue with my standard practice of boiling without a lid, though my confidence in contained brewing systems has admittedly increased. If anything, it’s results like these that lead me to question the accuracy of beer evaluation.