The histories of beer and mead are intertwined in the cultural evolution of man. At some point, a clear genius married the qualities of mead and beer in a hybrid beverage known as braggot.

You’d be hard-pressed to characterize all braggots under one description, with its vast history and presence around the world. In fact, besides having honey and malted grains in a beverage with the qualities of both mead and beer marking the character, the array of braggots are nearly as wide as the number of homebrew styles.

History buffs toil away trying to recreate what different cultures were drinking thousands of years ago, while other forward-looking mead makers and homebrewers are pushing the envelope of ingredient combinations in braggot.

In the end, the key to making any great braggot is forming a recipe that showcases the best of mead and beer in one delicious package.

Mead is argued as one of the oldest-known fermented beverages ever uncovered, and the history of braggot is not far behind. Honey has been used throughout history as a primary source of sugar in the diet and a fortifying agent in fermented beverages.

The famous Hymn of Ninkasi, a pair of ancient Sumerian “drinking songs” paying homage to a brew goddess, highlights the process of making beer with the use of honey. Ruins uncovered in the 1950s from the tomb of King Midas revealed traces of malted barley, honey and grapes all in one drinking vessel. Dogfish Head would go on to recreate this beer and continue to sell it today.

Braggot was a drink of choice, primarily in Europe, largely throughout the post-Renaissance period, and was fairly prominent in areas such as Wales up until the 1800s. In fact, the many names used to denote braggot, including bragget, bragaut, bracket, bragot and bragawd, are derived from Irish and Welsh roots, brach and brag respectively, for the words “to sprout” in reference to the grain portion of the honey beverage.

Braggot isn’t simply made by adding a sizable portion of honey to your favorite beer recipe, though that is not to say luck couldn’t turn out something high-quality in this scenario. The ultimate goal is a beverage with perceivable honey and beer qualities (meaning malt, hops and/or yeast) that compliment each other, though not necessarily equally present. Picking ingredients to achieve your vision will take some careful consideration, but you’re a homebrewer so this isn’t anything new!

In this day and age with an active homebrewing scene, it’s not difficult to get your hands on most beer ingredients, but we aren’t so lucky with different varieties of honey. Check out the Mead Making section on HomebrewersAssociation.org  for a deeper look at honey, but the general rule of thumb is to look for honey that is locally sourced, not processed with preservatives or high levels of heat and, of course, tastes good!

Honey comes in a many different varieties depending on the source the bee’s are using for the honey. Find the highest quality honey you can get your hands on, do a careful analysis of the flavors and start to imagine some ways it could be worked into a braggot recipe with a beer counterpoint.

Next, start to consider grains, as they will be the co-star of the show along with honey. In the earlier parts of braggot’s history, paler malts were most likely the primary grain. In some instances, the malt imparted a smokey quality due to the way the barley was dried over a smoking fire. But if you aren’t concerned with paying homage to history, than the sky is the limit. Commercial and homebrewed examples of braggots range from very light in color to stout-like, typically indicating the large variety of malts that can be and are used. This takes some careful consideration, and in some instances trial and error as with any recipe formulation, but a good place to start is thinking about what homebrew recipes you’ve brewed (or styles you like) that the honey you have will meld nicely with. Malt extracts can be used with great success too, if you want to keep the time and effort on brew day to a minimum. 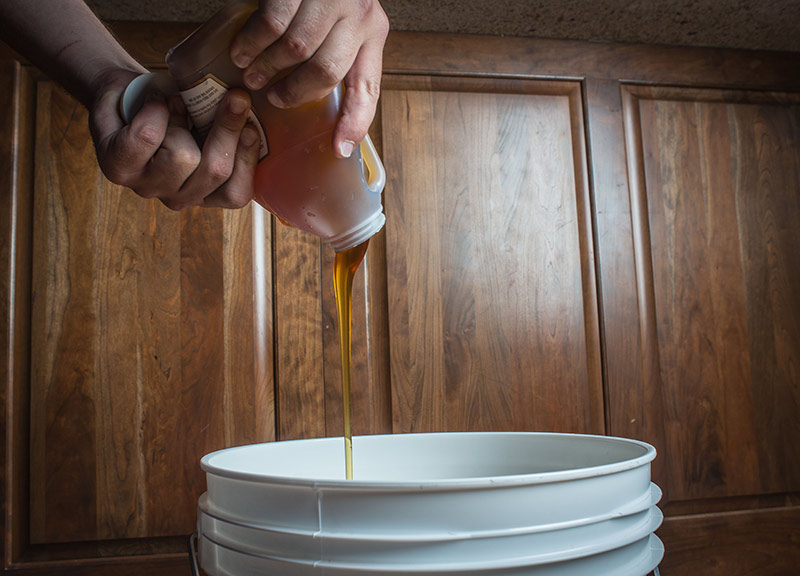 Hops are much more in the background compared to honey and malt, and in some instances are not present at all. In the past, hops were oftentimes substituted with local spices and herbs that were more readily available. The primary use of the hop is to act as a counterpoint to the sweetness from the honey and malt. It’s generally suggested to avoid hop types with high levels of alpha acids and very aggressive aroma and flavor qualities, but that is not to say you can’t sucessfully make a hop-forward braggot. The key is balance, and remember that honey can ferment out fairly dry so there might not be as much residual sweetness as you’d think.

Yeast can be a bit tricky because mead is typically fermented with wine yeasts and beer with ale, lager or wild yeasts. The biggest considerations are alcohol tolerance and desired yeast character. Braggots tend to be on the stronger side so the most important thing is to pick yeast that are up to the job ahead. Anything with a gravity above 1.120 will likely need yeast strains with a tolerance to higher concentrations of alcohol, or else you risk being left with a partially fermented beverage this is low in strength and overly sweet.

And then there is “the rest.” You can add spices, herbs, fruits, vegetables, and so on. If entering a competition, this would likely require the braggot to be entered in a specialty category, but incorporating grains and honey keeps it a braggot at heart.

Check out the following braggot recipe, which is a great basis for a braggot and can be tweaked to evolve into the wildest of creations.

Braggot is brewed as one whole beverage, and not typically a beer and mead blended after fermentation. Historically, honey was likely added to the boil or just prior to fermentation, both techniques which can be used today. However, modern meadmaking theory is jumping the “heated honey” ship to try and maintain as much of the honey flavor and aroma as possible. Throwing honey in the boil causes a lot of the aromas to blow off and thus not make it into your beer. Very fast and vigorous fermentations can have similar results.

Consider adding the honey to the primary after the wort has chilled, especially if it’s a lower-strength braggot. Honey can also be used to “feed” fermentation, especially in stronger versions, which allows you to ferment lots of sugar gradually instead of overhwhelming the yeast all at once. If you’re after lots of honey character, consider back-sweetening by adding a small amount of raw honey at packaging that will not be fermented (but be wary of bottle bombs if bottling!).

Braggot can be packaged still or carbonated, though carbonation can add another nice counterbalance to the sweetness and help bring out some of the aromas from the honey.

How to Make Washed Honeycomb Mead with Medieval Flair