This article is an exclusive online extra from the May/June 2016 issue of Zymurgy magazine.

You’re running late for an important meeting with a valuable client when traffic screeches to a halt. An uninterrupted river of red stretches ahead as far as you can see. You swear for a bit, look at your watch, and pick up the phone.

But before you can call to say you’ll be delayed, something catches your eye. Your navigation system has suggested an alternate route that doesn’t just bypass traffic, but reaches your destination even earlier than you had planned. And the exit you need is just off to the right.

So, without delay, you pull onto the exit ramp, call your client, turn around, and head back home. Meeting’s cancelled! If you can’t get there the long way, you might as well not go at all.

Makes no sense, does it? Yet we homebrewers do the very same thing when we cite “not enough time” as our reason for not brewing as often as we’d like. Fortunately, there’s an easy way to brew when you’re big on thirst but short on time.

It’s called malt extract, and it deserves another look.

American Homebrewers Association Director Gary Glass recently encouraged Zymurgy readers to embrace extract as a time-saving convenience that can fill your homebrew pipeline without filling up your Saturday (see From the Glass in the Jan/Feb 2016 issue). Whether you’ve never brewed with extract or are rediscovering its time-saving convenience after many years, we’ve got you covered with a few suggestions for making great beer—perhaps even your best beer ever—from malt extract.

There was a time when most new homebrewers got their start with malt extract. Some continued to brew that way indefinitely, while others learned to mash grain and brew entirely from scratch after having mastered the basics.

The implicit progression from extract brewing to all-grain methods is so fundamentally entrenched in homebrewing culture that our very language reflects it. We don’t add mashing to our toolkit, we “go all-grain.” (Interestingly, Merriam-Webster defines go as “to move on a course” or “to move out of or away from a place expressed or implied.” It evokes getting away more than it does arriving.) 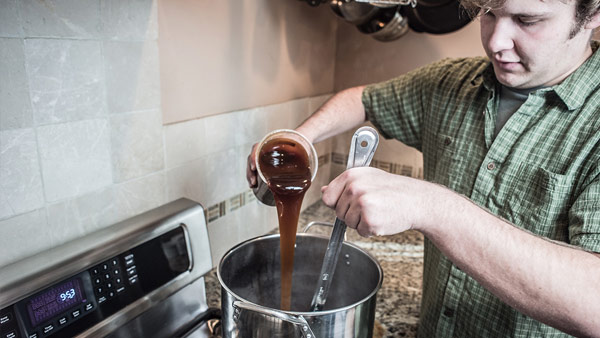 The latest findings in the AHA’s survey of shop owners suggest, however, that increasing numbers of new brewers are skipping extract-based methods and jumping right into the all-grain process. Now, all-grain brewing isn’t terribly difficult, but it is rather time-consuming. After all, you can’t rush science—water takes a while to heat, enzymes need time to liberate sugars, and wort can only flow so quickly from tun to kettle.

Extract eliminates the need to mash, lauter, and sparge, which are by far the most time-consuming parts of the brew day. All you need is a big pot and a heat source, and you’re ready to go. I suggest, then, that we not divide ourselves into extract and all-grain camps. We are all homebrewers.

Mashing is simply a process you use to make sweet wort. And so is dissolving malt extract into hot water. When you remove your self-imposed labels, you free yourself to enjoy the brew day with new eyes.

I think some brewers eschew extract because of bad memories of their early years, when extracts might have sat around for weeks or months before seeing the inside of a brew kettle. Like most foodstuffs, fresher is better when it comes to extract, and tired old cans of malt syrup gathering dust never did anyone any favors.

Nowadays, there’s no reason to suffer through stale extract. Reputable homebrew stores turn over their inventory regularly, and getting your hands on fresh malt syrup is easy. If you find that your shop just doesn’t go through liquid extract that fast (which might be the case for the less popular flavors), then don’t hesitate to buy dry malt extract, which has a much longer shelf life and works just as well as the liquid stuff.

When you get your extract home, keep it away from heat, light, and oxygen to prolong its useful life. Then if your own life gets in the way, you can sleep soundly knowing that it will be ready when you find time to brew. The back of the refrigerator is a great spot as long as you maintain a reasonably clean fridge that doesn’t harbor odors. Just remember to let it come to room temperature before you use it! (The extract, not the fridge) 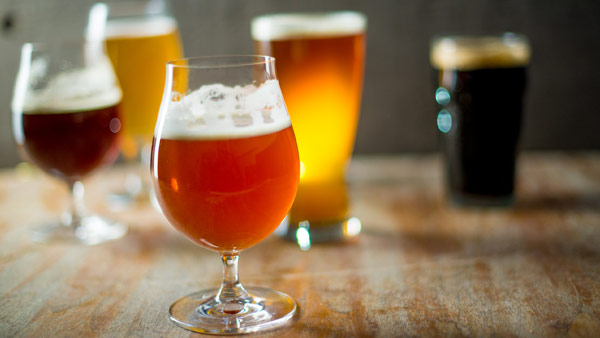 The late addition is one of the most useful tools in your extract arsenal. Quite simply, it involves adding part of a recipe’s malt extract at the start of the boil and reserving the remainder for the last 10 to 15 minutes. Because extract is boiled as part of the production process, it doesn’t need to be boiled a second time except for sanitation purposes.

Adding a good chunk of the extract late in the game confers a number of benefits, including

So how much extract do you add up-front, and how much do you save for later? There’s no right or wrong way to do it, but I like to decide based on boil volume.

Let’s say you’re brewing a 5-gallon (19 L) batch. When I brew from extract, I usually do so on my kitchen stove with a plain old 3-gallon (11 L) stockpot, the same one I use to prepare, well, stock. Including a bit of headspace leaves a boil volume of 2.5 gallons (9.5 L). So, I just add about half of the extract up front and the other half near the end of the boil. I don’t get out the kitchen scale, I just eyeball it.

I also have a 5-gallon (19 L) brew pot that I like to use for higher-gravity extract batches. With some headspace, I can boil about 4 gallons (15 L) in it. In this case, I aim for about 80 percent (4/5) of the extract at the beginning, and I add the remaining fifth at the end.

The fractional volume method is sufficient if you’re mainly concerned with hops utilization. But if beer color is an issue, you might add just 10 to 25 percent of the extract up front. In these cases, consider reducing your bittering hops a bit—thinner wort means improved isomerization, so you need fewer alpha acids to achieve the desired bitterness.

One of the chief complaints that get leveled on malt extract concerns attenuation. Malting companies who produce extract do so recognizing that brewers will use it in a wide range of beer styles. Thus, the fermentability of the product tends to be somewhat middle-of-the-road, a one-size-fits-all composition to suit most beer styles. This means that very dry styles brewed from extract might turn out a little sweeter than intended, high-gravity examples even more so (note that the opposite isn’t a problem—you can always steep specialty malts to boost residual sweetness).

An effective way to improve attenuation in extract-based beer is to replace some of the extract in the recipe with a simple sugar like dextrose (corn sugar) or sucrose (table sugar). Both are 100 percent fermentable, which means that they deliver alcohol and carbon dioxide without any residual sweetness. And when used in quantities of less than 20 percent by weight, you won’t notice any flavor differences.

This trick works well in high-gravity beers and can mean the difference between a cloying malt bomb and a very drinkable wee heavy.

Think back to the very first beer you ever brewed. Whether you produced a masterpiece or an unmitigated disaster, chances are you had fun in the process. If you didn’t you probably wouldn’t still be brewing today.

My first homebrew was an English pale ale from a kit, and I vividly recall the day I made it. It was a rainy September afternoon, and spending a couple of hours next to my kitchen stove offered a warm distraction from the dreary weather outside. I followed the brewing instructions to the letter and never once loaded up brewing software. I had a great deal of fun.

Today, when I brew entirely from grain, I spend much of the brew day monitoring process variables, updating infusion temperatures, and generally multitasking so that I can wrap up in time for dinner. But when I brew from extract, I usually sit back and read for an hour (though I do still watch the brew pot out of the corner of my eye: boil-overs are no fun). Sometimes it takes a low-key brew day to supply the beer that inspires me to do a longer all-grain session.

The point is that we should always remember why we brew (see “I Love You, Beer, Worts and All” by yours truly in the Nov/Dec 2012 issue of Zymurgy) and honor that. If you’re not having fun, you’re doing it wrong.

I enjoy brewing all-grain batches of beer; otherwise, I wouldn’t do it. But sometimes there’s not enough time, or I don’t feel like it, or I have somewhere I need to be (or, increasingly, I sleep late). In such cases, I’ve learned that I don’t need to give up brewing. I just need to let go of my preconceived notions of what it means to be a “real” homebrewer.

Either way, don’t be surprised when you find yourself with a little extra time on your hands and a little more homebrew in the fridge.