Yeast is absolutely critical to beer, which makes it critical to you as a homebrewer. On a basic level, yeast converts sugar to ethanol and CO2, but there is so much to discover and explore with yeast you couldn’t put it in one article (which is why books are dedicated to the subject matter).

We did ourselves and you a favor and passed on writing a book. Instead, we focused on yeast starters and yeast health, and chatted with Drew Bombard, Brooklyn Brewery’s director of quality, about how to make happy, healthy yeast.

What is the purpose of a starter?

The purpose of a starter is to produce a new, healthy, viable, pure culture of yeast that can be used to carry out the fermentation of wort into clean beer.

Do I always need to make a starter?

No, after a starter has been used for its first fermentation, it can be harvested and reused for subsequent fermentations. It is typically better to keep reusing yeast for multiple fermentations than to make a new starter for every fermentation, so long as you can ensure the yeast is stored and handled appropriately in between fermentations.

When shouldn’t I use a starter?

This may sound obvious, but if you already have good, healthy, clean yeast handy then there is no need to make a fresh starter. The best way to handle yeast is to plan brews to be pitched with harvested yeast. When one brew is at or near terminal gravity, be ready to brew your next batch so you can pitch this new wort with the yeast from the previous batch.

Young cultures (starters, first generations, and second gens) and old generations (10th and up) may not always preform as well as mature generations (third through ninth). Making a starter is not only unnecessary, but it can also be less effective than using harvested yeast.

Should I add hops when I make a yeast starter?

Yes, but you don’t want to add too many. The ideal wort for a starter should consist of mostly pale malts and little to no roasted malt, and you should target about 8–12° Plato, and maybe 15–25 IBUs. You can propagate yeast in many different worts with success, but ideally the wort you propagate in shouldn’t be too strong in any one dimension.

Should I add oxygen to my starter?

Yes, or sterile air. The idea of a starter is to grow many healthy and clean yeast cells from few. Yeast will undergo aerobic respiration in the presence of wort and air or O2 and begin to multiply rapidly while also consuming wort sugars and nutrients. In order to increase yeast biomass, you will need to aerate your wort continuously while propagating.

How much yeast or how big a starter do I need?

Both depend on how much wort you need to ferment and how strong the wort is. We aim to pitch our wort with about 1 million cells/mL of wort per degree Plato. So, if we brew a wort with a starting gravity of 10° Plato, we would need the pitch rate to be about 10 million cells/mL of wort. If you know the volume of wort you want to ferment and the gravity of that wort, then you can calculate how many cells you’d need to carry out the fermentation. 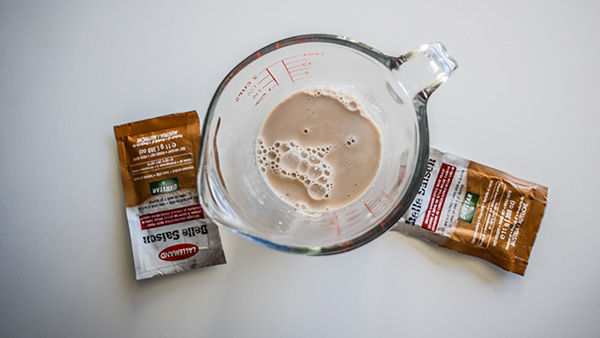 Does a starter need to be kept at the same temperature as it is going to ferment the batch of beer later?

No, it can be propagated at room temperature. But if you can’t use it right away after propagation is done, store it cold to preserve vitality and viability.

Can too small or too large a starter be bad for the yeast?

Yes, usually the rule of thumb while propagating yeast is to use a 1:10 ratio of yeast to wort when starting or stepping up a starter. So if you start with 10 mL of yeast, you’d want to prop it in about 100 mL of wort. Once the yeast cells have grown into this volume, it can then be stepped up into 1,000 mL (1 L) of wort and continue to grow. So on and so forth. Using the 1:10 ratio is really easy and provides good results.

I would say no. The idea here being you want to have the happiest, healthiest yeast possible to go into a high-gravity (high-stress!) wort. If you grow the proper amount (for the appropriate pitch rate!) of yeast in a nice, mellow, neutral wort, it will come out super happy and strong and ready to tackle anything. If you try to grow yeast in a high-gravity wort, you’re not giving them the ideal conditions for growing into healthy culture. You then compound the situation by pitching this unhappy yeast into a high-gravity beer.

I’d grow a large volume of yeast in a nice, easy wort and let the strongest happiest yeast tackle the big, burly, high-gravity stuff. One more thing to add—I would not suggest harvesting and reusing the yeast from really big, burly brews for the exact reasons I just described.

Can I pitch a smaller portion of yeast into the same sized starter and get the same amount of cells at the end?

You probably could, but the health of your yeast will be best if you follow the 1:10 ratio for stepping up propagations. After all, just because you have cells doesn’t mean they’re healthy or ready to carry out a clean fermentation. The goal is to grow the best yeast possible. Practice patience and take the necessary steps to do so.

What are some counting techniques and math for yeast cell count on the homebrewing level?

For those with a hemocytometer and a microscope, counting can be easy. There are no real tricks that come to mind. Plan your target pitch rate based on wort gravity. and count your pitching slurry cell density by weight. Then use weight to determine how much of your slurry you’d need to provide the given volume of wort with the proper number of cells.

How do starting gravity and fermentation temperature affect the finished beers in regards to yeast metabolism?

This is a good question and one that I will admit I wish I knew more about. What I do know is that each strain of yeast is different and will have a different set of ideal conditions for fermentation. Starting gravity, fermentation temperature, wort composition, aeration of wort, and condition of yeast are some of the many factors that play all important roles in fermentation and metabolism.

For example fermenting at the high end of a given range may bring out more aroma compounds in class A, while running it at the lower end might bring out less of A and more of B. What those compounds are depends on many things. So long as your beer tastes good and you’re having fun while making it, you’re doing it right! Kind of a lame answer, but it’s a pretty broad question.

Drew Bombard is the Lab Manager & Microbiologist for Brooklyn Brewery in Brooklyn, New York. He attended Colorado State University, where he received his bachelor of science in microbiology. He previously worked at New Belgium Brewing Company in Fort Collins, Colo. before joining the Brooklyn Brewery team.