It may be the best time to be a beer drinker. Craft beer is growing and homebrewers are increasingly able to take advantage of developments in the industry. One recent innovation has been the introduction of several forms of concentrated hops. Lupulin powder and hop oil have been gaining popularity over the past few months among commercial breweries. These products let brewers add significant hop flavor without the vegetable matter that comes with using a huge volume of traditional hops. The main manufacturer behind these is Yakima Chief–Hopunion (YCH Hops), which markets them as Cryo Hops lupulin powder and Resinate CO2 extracted hop oil. YCH launched these products to the homebrew market in summer 2017.

Recently, Upslope Brewing Co. of Boulder, Colo. and Odd13 Brewing Inc. of Lafayette, Colo. collaborated to explore these products. This meant going a bit outside the box with their collaboration beers. The only difference was that one was hopped with lupulin powder and the other with hop oil. The powders and the oils came from Mosaic and Simcoe hops. These products are intended to complement traditional hopping and give your brew more punch, so using them as the only hops in the brews was a little unconventional. But the purpose of the experiment was to showcase exactly what each form of hop concentrate will bring to your beer.

I spoke with Alex Meyer of Upslope and Eric Larkin of Odd13 to see what they learned and how these products can be best utilized by homebrewers.

Both hop oil and lupulin powder function well in early and middle kettle additions. The action of the boil allows either to mix in for great results. The hop oil stood out to Alex as a great option for precise bittering with minimal loss due to absorption. Lupulin powder can also be used to great effect but is better suited for late additions. 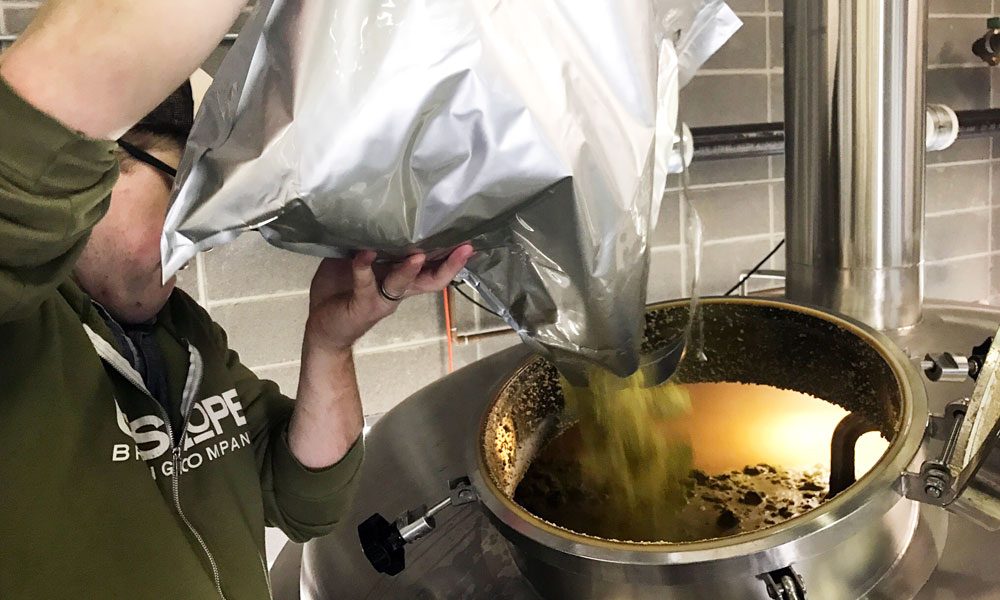 Late boil and whirlpool additions are tricky for both products. The oil needs some time boiling to dissolve into the wort. The powder may need a little help for late additions, either by mixing or by spraying water to break up dry clumps. Alex noted that late additions of lupulin powder have higher utilization than traditional forms of hops and can deliver significant bitterness even with only a short boil time.

Dry hopping between the two products is night and day. Resinate is difficult to use and yields little to no impact on aroma. The powder, however, provided increased tropical aroma without the grassiness that comes from large dry hop additions. Yields are also much higher when the powder is used in place of pellets or cones for dry hopping. Unfortunately, the powder can be difficult to mix in without sophisticated equipment. The brewers recirculated it to get their results, an option that isn’t available to homebrewers (Eric also stated that he’s spoken with professional brewers who’ve had issues, even with commercial equipment). A potential solution is to add some pellets in with the powder to help it sink, but neither has attempted this. A pelletized form of lupulin powder may reach the market that could help with this.

Both brewers noted the benefit of the products to the yields that they saw for each batch. This is much more of a positive for large-scale brewing, but it is a nice perk for homebrewers who want to share their work.

It will be interesting to see more brews use these products as intended, but the benefits to yield and dry hopping stood out to both breweries.

From our tasting notes, each form of hop concentrate brings different results to the table.

The powder added more to the aroma of the beer, giving it an intense, resinous nose with some distinctive fruit scents. The oil added a slight fruit aroma, with notes of peach to accent the sweet malt aroma. 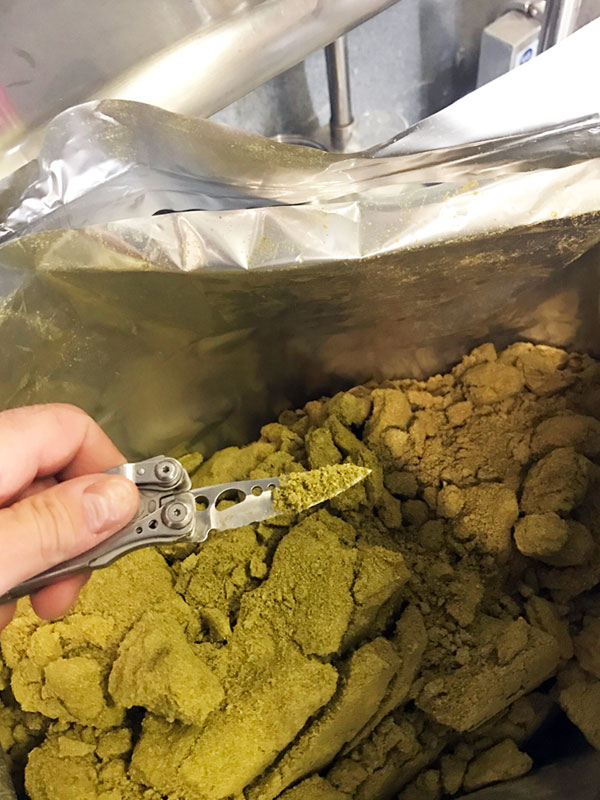 The hop oil added juicy and fruity flavors to the beer, which complemented the malt sweetness and slight yeast flavors. The oil also contributed a mild bitterness, while the powder offered much more aggressive bitterness. The lupulin powder added some fruit character, but that could be overlooked next to the resinous and almost spicy flavors it instilled.

Neither seemed to have a huge impact on the mouthfeel of the brews.

The brewers said the lupulin powder packed a more significant punch overall and that it added more aroma and flavor than the oil. The oil contributed significant fruity flavors without much aroma.

Both brews, while unmistakably different, have been popular in the tap rooms. This is especially true when you let customers in on the innovative thinking behind the experiment. Beer drinkers and homebrewers alike enjoy the innovation behind contemporary brewing. Let us know how excited you are about these new hop products and what experiments you’re planning.

Dan Powell works at Upslope Brewing Co. in Boulder, CO and previously interned for CraftBeer.com at the Brewers Association. When he’s not slinging suds in the Upslope taproom, you can find Powell hiking with his wife and dog, playing video games, and writing about all sorts of cool stuff. @DanPow6