This article is the online extra from the May/June 2018 issue of Zymurgy magazine.

“You spent how many days in jail!?”, I keenly gasp.

“Two days,” boasts Taopiphop, a tall, youthful Thai in his mid-twenties. This seems excessive in my mind for a 10-gallon (38-liter) brew day. I try to imagine the police busting in on one of my brew sessions in Colorado and shuffling me off to jail. But he wears his experience in Thai prison as a badge of honor.

The homebrewing convict hands me his card, a caricature of himself with baseball cap and beard center stage: think South Park meets Mikkeller. We continue discussing the state of brewing in Thailand, unearthing one draconian policy after another.

I came to Bangkok in June 2017 to attend the Versuch- u. Lehranstalt für Brauerei in Berlin (VLB, or Institute for Fermentation and Biotechnology, Berlin) Brewing Conference and get a feel for Thailand’s brewing scene. The conference served its purpose and offered an eye-opening introduction to Thailand’s nuclear craft community.

I soon discover that Taopiphop embodies the falling crest of the blossoming craft movement in a country where the large brewers are in bed with the government. Boon Rawd Brewery (makers of Singha) and Thaibev’s (producers of Chang) stranglehold on power influences laws in their favor that make it nearly impossible to open a craft brewery and dubs homebrewing a jailworthy offense.

There are two legal options for opening a brewery in Thailand, each with major hurdles for the intrepid entrepreneur. One may open a production facility, but the minimum capital investment for a production brewery is 10 million baht (about USD 300,000), and a minimum sale of 100,000 to 1 million liters of beer per year is required. Brewpubs are the other possibility, but these have equally strict investment rules, and brewpubs are not allowed to distribute. With average annual individual income at about USD 4,800, these regulations leave fledging brewers, even those from well-to-do backgrounds, with limited options.

Imports are the means by which a craft beer scene legally exists on the fringe in a country with such high entry barriers. There are two categories of imports: those brewed by Thai pioneers in neighboring countries then imported back to Thailand, and traditional imports from countries like the US and Belgium. Many of these Thai brewers learned the basics “off the books” in Thailand and are quietly building the necessary capital and biding their time before they bring their operations home. Of course, many Thai brewers break the law and produce some or all of their beer domestically.

This white ale is inspired by classic witbier. We infused the traditional wit with Kaffir lime peels and mixed two yeast strains to enhance the flavor and aroma. For the hops, we blend Saaz and Northen Brewer with the classic New World flavors of Cascade. The result is a smooth white ale with the unique citrusy flavor and aroma from kaffir lime.

If one were to point to a central figure in the creation myth of craft brewing in Thailand, it would be Wichit Saiklao. A colonel in the Thai army, Saiklao is a visionary akin to Charlie Papazian in the United States. An engineering graduate of the Virginia Military Institute, he got a taste for homebrewing and craft beer while living in the US for 11 years. Upon returning to Thailand, he paid 2,000 baht (about USD 60) to ship himself homebrew kits from a store in Idaho on a monthly basis. As soon as a friend tasted a promising batch that Saiklao had brewed, teaching others to homebrew and opening his own brewery became a natural progression. ChitBeer was born.

Since its opening, the command center for Chit Beer has been on the small island of Ko Kret, about 10 miles (16 km) upriver of downtown Bangkok on the Chao Phraya river. With a total area of about 1.5 square miles (4 square km), the island is entirely walkable. Its rustic feel makes for a pleasant stroll past shady walkways flanked with musty wooden houses and ageless Buddhist temples. Saiklao explained how travel to Ko Kret serves as a nice filter.

“Only people serious about beer are willing to travel up to the Pak Kret neighborhood then wait for a dinghy to ferry them across the river,” he said.

I crossed the Chao Phraya on my last day in Thailand on a typically scorching and sticky June afternoon. For 2 baht (about USD 0.06), I ferried over in about five minutes. After a short walk, I stumbled onto ChitBeer’s riverside patio and homebrew academy. On the verge of mashing in with his students, Saiklao was in the middle of teaching a homebrew class. His brother operated the bar, and I wasted no time in ordering their Pilsner, an unfiltered crisp interpretation of the style that ended with a pleasant graininess.

Whether due to his military rank, his charisma, or his understanding of the “flexible” nature of laws in Thailand, Saiklao has gracefully and cheerfully raised a middle finger to the status quo in a country dominated by two lager-brewing monsters. His thriving homebrew academy is booked solid for two months in advance, and his two bars are constantly pouring illegal pints.

A man of unwavering optimism, Saiklao is a patient, long-term thinker. His beaming attitude is cemented with his fixed easygoing smile. There are big plans on the horizon that Saiklao hopes to see come into existence within the next two years. A few pieces of the so-called “Plan 2020” involve growing and malting barley in Thailand, opening a cooperative brewpub to vet brands, and establishing specific retail channels for the beer. Siklao refers to all of these components as an “ecosystem”, which is growing aggressively as the “flexible” laws of Thailand are tested in hopes of being eventually amended. 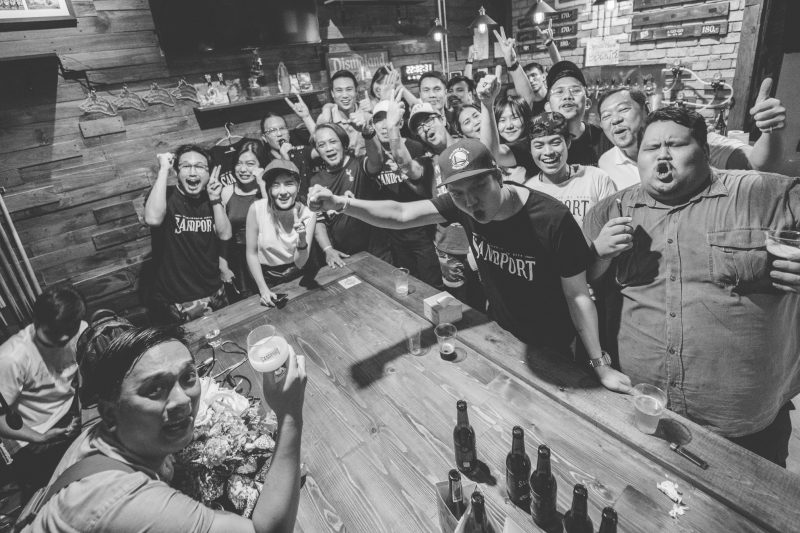 For now, retail outlets such as Mikkeller Bangkok, Hair of the Dog, and a handful of other bars are the main venues of craft beer in Thailand. These are the places to sample and learn about beer from the US and Europe, in addition to legally imported “Thai” beer brewed by many of my acquaintances in neighboring ASEAN (Association of Southeast Asian Nations) countries. About a third of imports in any given bar fall into this aforementioned “Thai” import criterion.

Most importers are graduates of Saiklao’s homebrew academy, such as Taopiphop. They have their own brands that they import and usually a small portfolio of brands they import from the west to feed the local craft retail bars. Brewing road trips are the norm for nearly all whom I met. They head to ASEAN neighbor states and then send the finished product back to Thailand duty free. Australia, Taiwan, and Japan are other favorite countries to brew in. When I asked where people learned to brew on a commercial scale, YouTube was the unanimous and somewhat disconcerting answer.

Supapong Pruenglampoo from Sandport Beer makes a regular trip to brew his beers in Taiwan. After meeting me at ChitBeer, Pruenglampoo insisted on taking me to visit Sandport’s bar, the Fellowship of Beer. Over beers, we talked of the changing times in the Thai beer market and possible ways to solve an attenuation problem in the Taiwanese brewhouse that he is still fine tuning.

Beer brewed in Thailand illegally and without license makes appearances in certain bars. Some bars keep it quieter than others, but the bootleg domestic beers were the gems in my tasting adventure in Thailand. I asked “Jimmy,” a homebrewer, importer, and obligatory graduate of Saiklao’s homebrew class if I could sit in on one of his clandestine homebrew days. I was met with a surprisingly stout “No,” a nice reminder that a lack of military rank is problematic for average Thai brewers.

Despite the current legal status of homebrewing and craft beer in Thailand, excitement in participating in this liquid underground is palpable. Another importer, brewer, and seemingly jack-of-all-trades, Thirdd Yookongsak, simply provided me with GPS coordinates to guide my Uber driver to a recently opened craft beer speakeasy. Dok Kaew House Bar was a traditional wooden Thai house turned into a bar, complete with a small kitchen. It felt like a cozy open-air restaurant in New Orleans. Traditional Thai appetizers were served alongside imported craft beer from the US, Belgium, and the existentially pleasing Thai underground.

At Dok Kaew, Yookongsak introduced me to the “Ekkamai” brothers. They brew their beers at Stonehead Brewery on the Thai border in Cambodia. They materialized a bottle of their IPPO Pale Ale, which had been waiting for me on ice in a small cooler next to the bar. While I sipped the 6.2% ABV pale ale and huffed all manner of citrus from it, the brothers explained how they are successfully growing hops in a greenhouse not far from Saiklao’s base of operations. Saiklao’s ecosystem seems to be thriving, as former pupils create a more complex brewing infrastructure.

The Mother of Invention

Many of the imported “Thai” beers I tasted had flaws, especially related to bad handling during shipping. Oxidation is a constant foe. Most of the illegal homebrewed pints poured on draft however, more than made up for the ill-treated bottled products I sampled.

Draft beers at Sheepshank, Chit Beer, Sandport, Dok Kaew House Bar, and other places were not only outstanding and well brewed, but often wildly creative. For a country with a limited craft scene barely five years old, my hosts wouldn’t think twice about brewing up wine barrel–aged wheat wines or any range of well-thought-out sours. Professor “Makkasan” from the biotechnology department of Assumption University in Bangkok, who cut his teeth at UC Davis, is a favorite underground source for pure cultures of brewing yeast and bacteria.

Many legal and technical challenges stand in the way before Thailand’s talented, eager brewers can legally brew and sell their beer at home. After talking to Saiklao, witnessing his optimism for change, and experiencing the momentum of the developing craft scene, I think it is fair to say the day will arrive soon. Time, at least for craft beer, seems to move fast in Thailand.

Alex Gearhart is a brewer and international consultant focusing on Spanish-speaking countries and other emerging craft beer markets. Travels unrelated to beer may take him to remote locations in mountains and deserts, or to favorite watering holes in Mexico City where he can sip eclectic mezcals. Visit limbicbreweryconsulting.com to learn more.