There is a lot of confusion surrounding what makes a beer “gluten-free” versus “gluten-reduced,” but it’s actually really quite simple.

They may sound the same, but being able to differentiate between the two can be critical when living with a gluten allergy.

In the commercial brewing industry, there are two categories of brewers who can claim 100-percent gluten-free beer.

The second operates as a regular brewery that can also brew 100-percent gluten-free beer, but this comes along with some strict guidelines. In this scenario, it is crucial to prevent the cross contamination of their 100-percent gluten free beers by following strict cleaning practices and taking extra precautions.

Beyond these 100-percent gluten-free beer breweries, another category of brewer uses barley and then pitches an enzyme into the fermenter that reduces the gluten content of the resulting beer. Since these beers are made from gluten-containing ingredients, they legally cannot be labeled “gluten-free” and are only allowed to be called “gluten-reduced” if an ELISA F5–a test used to measure gluten levels in food and beverages–shows less than 20 parts per million (ppm) of gluten content in the finished beer. These beers come with a warning label noting that, while it’s gluten-reduced, it does in fact contain gluten.

However, this designation of “gluten-reduced” doesn’t come without its challenges and limitations.

If a beer measures above 20 ppm in its ELISA F5 test, the batch must be destroyed. This is a deterrent for many breweries to attempt to brew gluten-reduced beers since it comes with legal hurdles that can be costly just to get their beer to market. On top of that, there is currently an issue regarding the accuracy of the ELISA F5 test in the presence of alcohol. 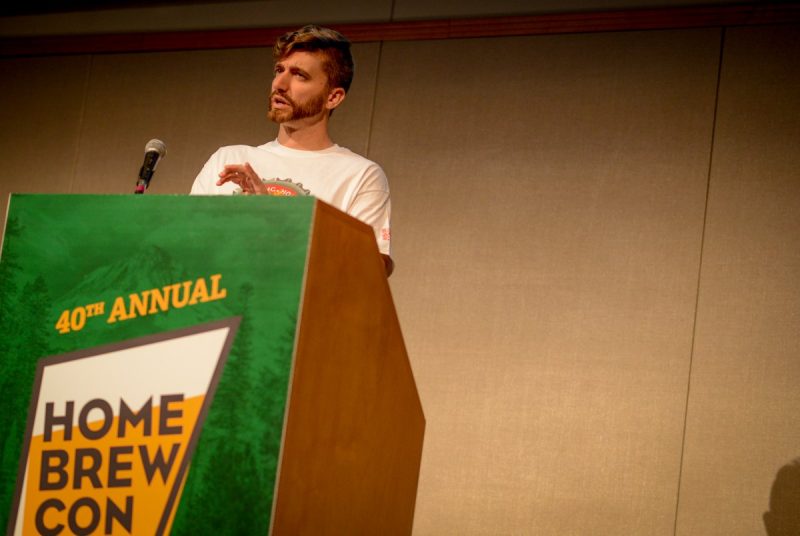 While there are a few gluten-containing grains to avoid (barley, wheat, rye, triticale, and spelt), the list of gluten-free grain options is quite large:

There are even more adjuncts, sugars, and syrups to consider when brewing gluten-free beer, too. The truth is that once you open the door to grains that are not barley and wheat, it’s incredible to see how wide your options are. Think about adding ingredients you never thought would work in a beer, like lentils, sweet potatoes, elder catkins, chanterelle mushrooms, or even chestnuts, all of which lend great texture and maltiness to a gluten-free beer.

It is true that barley and wheat basically want to be beer with their high enzymatic content, however most gluten-free grains can be found in malted form, and there are enzymes available to the regular homebrewer that let you make all-grain gluten-free beers that rival their gluten-containing relatives–and in many ways exceed them.

For example, buckwheat helps emphasize the phenols in saisons and other Belgian styles, while millet and rice help to create that “bready” or “cracker” taste German and British style beers are known for. I don’t even have to mention the efficacy of using oats in regular beer styles!

For reducing gluten in beer, homebrewers have the option to use a product like White Labs Clarity Ferm or Brewer’s Clarex. This product was originally created to reduce haze in beer, but it was found to reduce gluten levels to below the 20 ppm threshold.

Beer is truly in a renaissance, so to hell with convention–be as creative as you like for that relative who can’t drink any of your other homebrews. We’re all waiting to try your latest experimental concoctions!

Heat 6 gallons of RO (reverse osmosis) water to 165°F. Add 2 tsp Calcium Chloride and 1 heaping tbsp of Liquid Endo-Alpha Amylase. Add grains. Temperature will fall to between 150-155°F. Add 1 heaping tbsp of SebAmyl L and let rest for 90 minutes. Recirculate mash for 10-15 minutes until wort is mostly clear and conversion is complete. Heat mash to 168°F and lauter grains. Note: you may need to run a second strainer through the boil kettle to catch any millet, buckwheat, or lentil pieces that fell through your screen/mash tun (if not using “brew in a bag” method). You are looking for a pre-boil gravity of at least 1.035 after the lauter.

Chill hopped wort to 70-75°F and pitch 1 packet of WB-06 dry Wheat Beer Yeast (yeast is grown on gluten-free mediums). Let ferment between 70-75°F for as long as it takes beer to get to gravity of 1.013 or lower. Cold crash or Rack to 55°F then package. If you like it cloudy, don’t feel obligated to cold crash if you’re just kegging. Enjoy.

One fun thing I’ve done with this recipe is dry hop with super fruity hops or age it on fruit of all kinds. The banana clove flavor in this beer lends itself to any smoothie flavor you can imagine!

Robert Keifer is a member of the Zero Tolerance Gluten-Free Homebrew Club and past speaker at Homebrew Con.