Before jumping into this article, here are six things you need to know about the HBC-438 experimental hop variety:

During the 2015 National Homebrewers Conference in San Diego, Jason Perrault of the Hop Breeding Company (HBC), Karl Vanevehoven of Yakima Chief Hopunion (YCH) and Vinnie Cilurzo of Russian River Brewing Co. gave a seminar discussing a new hop variety for homebrewers, HBC-438, and the ways in which new types of hops are developed. (Editor’s note: AHA members can access this seminar, and other past conference seminars online)

Perrault detailed the process, which begins when a hop breeder cross pollinates male and female plants and ends 10 years or more later when a new hop variety is released. Pardon the plug, but you can read more about Perrault and the hop breeding process in my book For the Love of Hops. Each plant must pass multiple agronomic and brewing tests, or as English hop breeder Peter Darby says, “When the seedlings go into the field in May, at this point a great hop is a great hop. But it’s not identified. We haven’t found a way to speed that up.” 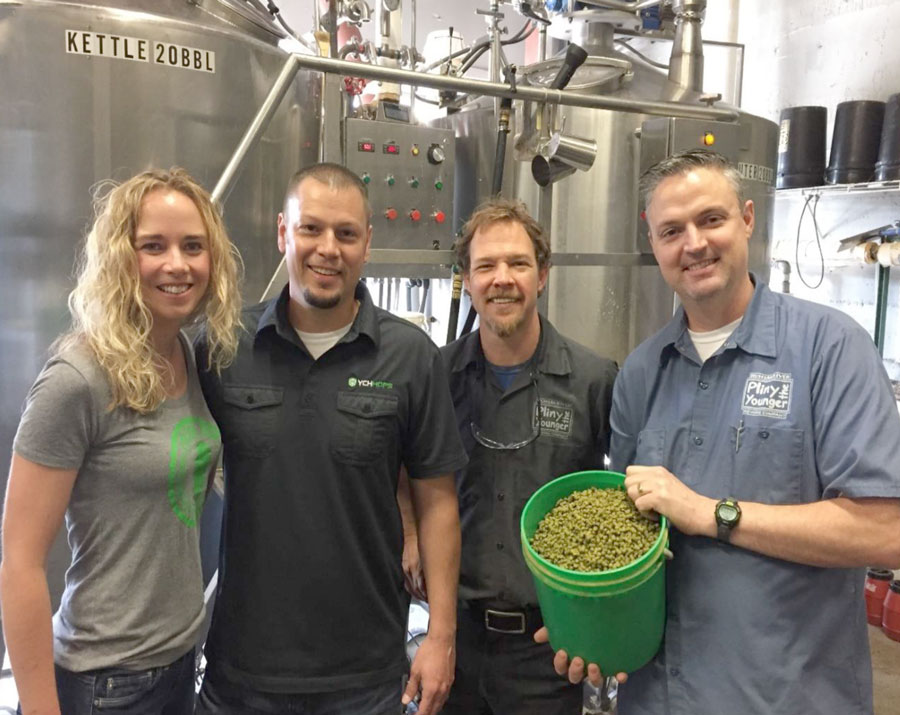 Brewing trials are one of the final steps in the process, and the release of HBC-438 could be considered the broadest trialing ever. Increasingly, experimental varieties—not only from the Hop Breeding Company, but also other hop breeders—have made their way into the brewing channels, both home and commercial, when they are known only by a code number. But not at this scale.

Perrault said that he’s often given Vanevehoven, who is vice president of operations for YCH and an avid homebrewer, experimental varieties to test at home. Vanevehoven made the first beer Perrault tasted that was made with HBC-369, which was later released in 2012 as Mosaic. He also brewed the first HBC-438 beer Perrault tasted, before it was even called HBC-438.

Perrault made the cross that resulted in HBC-438 in 2004. The mother was a plant given to him by Chuck Zimmerman in 1997. Zimmerman, Perrault’s mentor, was one of the most influential hop breeders, well, ever. He worked for the United States Department of Agriculture (USDA), having a hand in developing hop varieties such as Chinook and Centennial, bred hops in his own yard (the results including Simcoe and Warrior), and later helped establish Select Botanical Group, which merged with the John I Haas breeding program in 2003 to form the Hop Breeding Company. 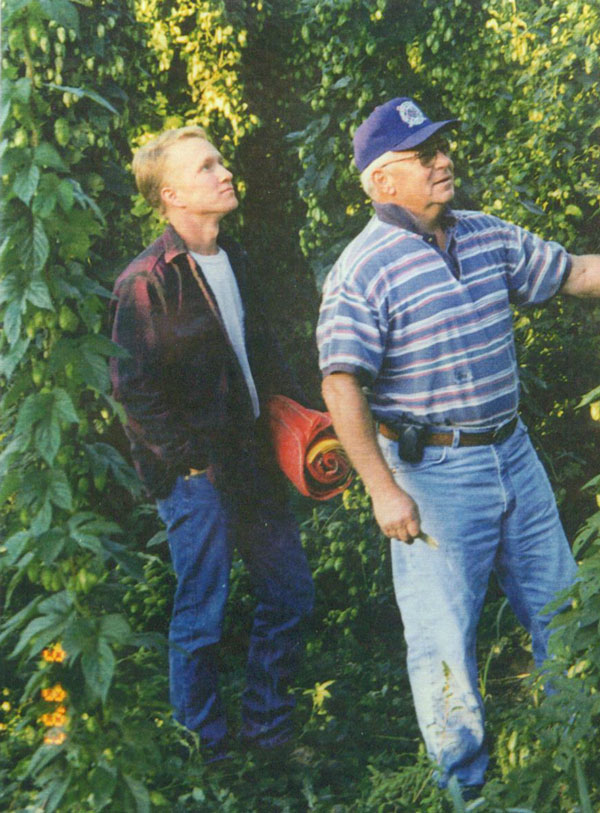 “Chuck’s Mexican” is obviously an altogether different plant from the cultivated hops growing in Oregon and Washington, and now New York and North Carolina. “I’d never seen anything like it,” Perrault said. It smelled rank, its leaves looked like those on a marijuana plant, and it flowered late if at all. He had to quarantine it because otherwise it would overrun the garden in which it was planted. He doesn’t know exactly where Zimmerman got it, but is pretty certain it came for the American Southwest or possibly northern Mexico. It’s clearly from the neomexicanus branch of the Humulus family (more about the botany here). Those hops migrated from Mongolia to North America 500,000 or more years ago, so plants in the Southwest have had plenty of time to develop/adapt differently from those in the Northwest.

HBC-438 is a result of open pollination, which is why the father is unknown. Perrault noticed that several of the resulting plants had unique aromas, particularly selection #0406363074 (“fruity, banana”). He gave Vanevehoven a small sample in 2007, then more in 2008. It hadn’t earned an HBC number yet, and #0406363074 didn’t exactly roll off the tongue, so they gave it a code name: “Ron Mexico.” Vanevehoven also called some of the beers he brewed with it “Ron Mexico.”

“It gave us an idea,” Perrault said at the 2015 National Homebrewers Conference. “If we are getting these great results from homebrewers, and we get a lot of support and a lot of energy from you guys, why not utilize that and give you guys a hop to test before the commercial brewers are able to get it?” It will be available through multiple vendors, including Northern Brewer, LD Carlson, Midwest Supplies, More Beer, and Brewcraft USA. 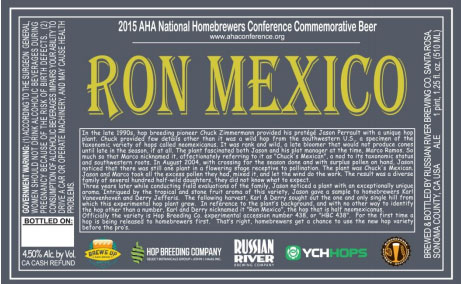 I had a chance to smell HBC-438 during Hop Union’s Hop & Brew School in 2013. Perrault put out several unlabeled varieties, including commercially available hops and experimental ones. It was one of two that “popped” at first whiff, Simcoe being the other. On that day, at least, I preferred the aroma to Citra and Mosaic (which were also on the table). I gave it high marks for the tropical fruit, stone fruit, herbal and spicy, and liked a subtle cedar note. But I also gave it five (out of seven) for onion/garlic (less than Mosiac, more than Citra). Of course that’s only the aroma of the raw hop.

At the time, Perrault called it a “love it or hate it” hop, so perhaps one that would work better blended with others. Nonetheless, the version of “Ron Mexico” Russian River made as one of the commemorative beers for the 2015 National Homebrewers Conference was hopped only with HBC-438 and very well received. There are a few reviews of it at Beer Advocate and Rate Beer, but soon homebrewers will get a chance to find out what it tastes like in their own beers.