The famous Munich Oktoberfest is known worldwide as one of the biggest beer events, and it has brought the Oktoberfest beer style into popularity among craft and homebrewers. But Oktoberfest, the beer style as we know it today, wasn’t always the flagship brew at the Bavarian beer festival.

Believe it or not, Oktoberfest didn’t come to fruition when a few beer-loving Bavarians decided it was time to establish one of the longest running and most popular beer festivals in the world. In actuality, what was to become Oktoberfest was originally intended to be a one-time celebration of royal marriage.

In 1810, Bavaria’s King Maximillian I. Joseph declared a 2-day festival in mid-October to celebrate the wedding of his son, Prince Ludwig to Princess Therese. Free beer and food were offered at various locations across Munich, music and dancing were enjoyed by guests, and even a horse race was held. The spectacle, which was as much a demonstration of national unity as a wedding, was such a hit among the royal family and its people that they decided to hold a similar celebration, complete with beer and horse races, the following year. The celebration was eventually lengthened and pushed back on the calendar a few weeks to accommodate better weather.

Two-hundred years later, with only a few missed years in between, Oktoberfest continues to be held in Munich in the last two weeks of September into the first weekend of October. The event continues to boast horse races, music, carnival attractions, and, of course, beer. With attendance sometimes reaching 7 million, the amount of beer purchased and consumed is impressive. 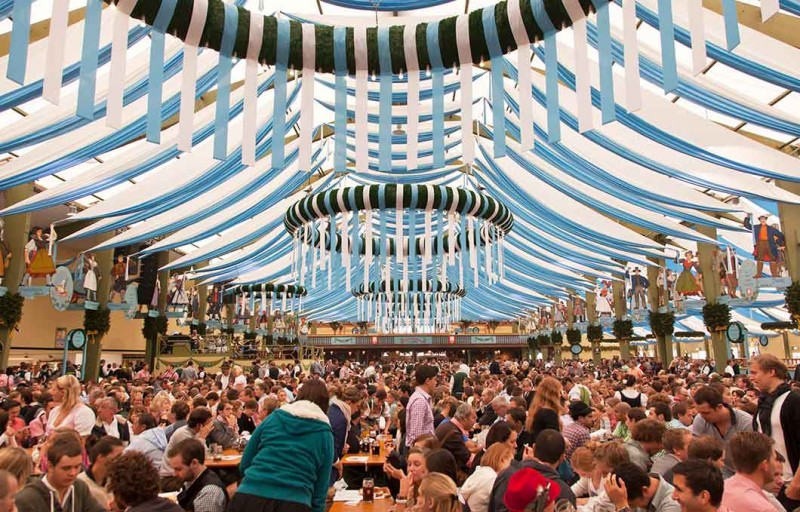 The Beer of Oktoberfest

It may not come as any surprise if you are familiar with the German beer purification laws (Reinheitsgebot), but the Oktoberfest has even more restrictions on what beers can be served at their illustrious beer event.

In addition to the Reinheitsgebot, a major qualifying factor for a brewery to serve beer at the Munich celebration is being in the city limits of Munich. No beers from breweries outside Munich are allowed to be poured at Oktoberfest, and even some of the smaller breweries in Munich are excluded. In fact, the European Union has a regulation stating only certain breweries in Munich, which tend to be the larger facilities, are allowed to call their beers “Oktoberfest.” Of course, this does not apply to American craft beer, and Boston Beer Co. boasts the title of brewing the most Oktoberfest annually in the world.

But interestingly enough, the beer of Oktoberfest in Munich was not always the copper-colored, malty beverage that has come to mark the event today.

Early on in Oktoberfest’s history, the beer served was likely a darker lager more along the lines of the Munich dunkels of today. The use of crystal and Munich malts, a reserved noble hop regiment and moderately carbonate water create a clean-drinking, malt-forward lager that is sweet but not cloying.

Then, the story goes, in 1872 one of the approved Oktoberfest breweries ran out of precious dark lager while trying to quench the thirst of attendees during an exceptionally hot summer. Instead of accepting defeat and very likely losing their coveted contract with Munich Oktoberfest, the brewery brought in a stronger (about 8%), Vienna-style lager. Even with a slightly higher price, the alternative was a hit, and bock-strength lagers increased in popularity up until the time of World War I.

After the first world war, the strength of the “standard” Oktoberfest beer fluctuated (4-9%), with the color evolving into a reddish-brown, Marzen-like hue. Today, the Oktoberfest style has settled into session strength, malt-forward lager with a beautiful golden to copper color. But who knows what the Oktoberfest style fifty years down the road will look and taste like?

Find the perfect Oktoberfest recipe to brew in our Homebrew Recipes archive!

Sources: The Oxford Companion to Beer by Garrett Oliver et al; “Oktoberfest: It’s all about the Malt” by Kevin A. Kutskill (September/October 2006 Zymurgy magazine)