Significant results from recent xBmts comparing different types of fermentation vessels have left many scratching their heads in bemusement and hypothesizing possible explanations. Some have posited the perceivable differences between beers fermented in different vessels is a function of the material they’re constructed from, with most arguments seeming to revolve around oxygen permeability and the impact increased exposure to oxygen has on beer. Given the fact every significant fermentation vessel xBmt has compared a notably impermeable fermentor to one made of plastic or PET, this argument certainly seems to hold some water.

We make it a point when performing xBmts to rack equal amounts of wort to identical fermentors in order to eliminate headspace as a confounding variable, but perhaps this practice is responsible for the aforementioned results, as trivial as it seems on the homebrew scale. Trivial or not, I wasn’t prepared to settle on conjecture and decided to test it out for myself!

For the new year, I committed to learning more about English Bitter through experience brewing the style often and designed a recipe I thought might work well for the variable being explored.

I made a large starter of Wyeast 1469 West Yorkshire yeast, a strain I’ve been excited to play with for some time now, a couple days ahead of time. 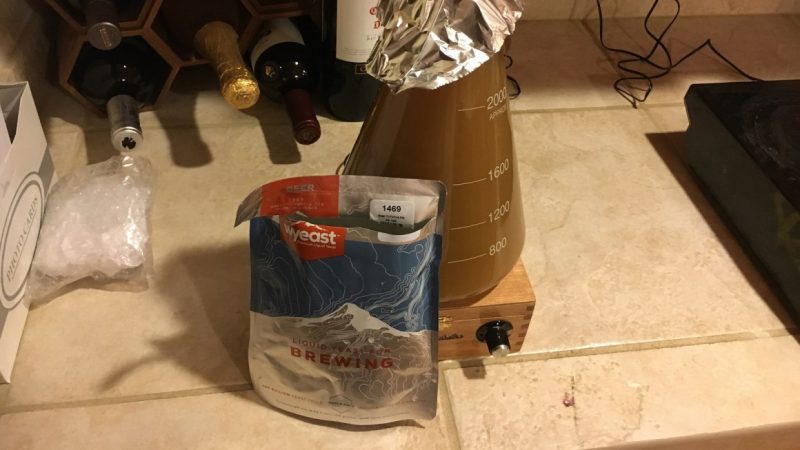 I made my RO water the day prior to brewing and adjusted the entire volume to my desired profile. 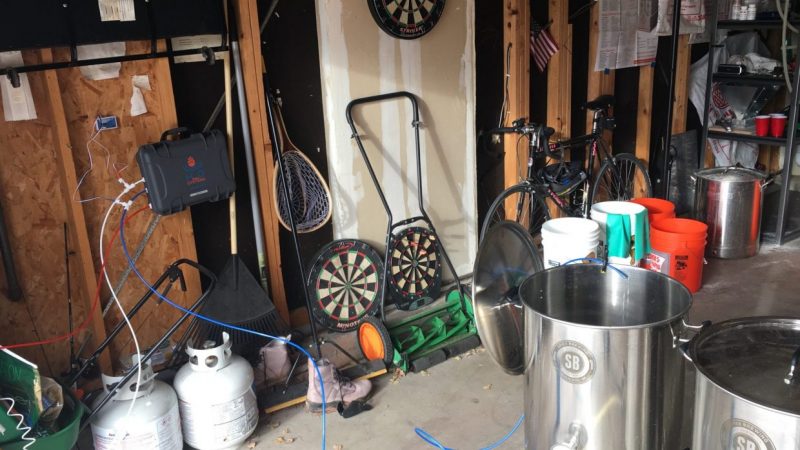 The following morning started with me lighting my burner’s flame to heat the strike water to the appropriate temperature. 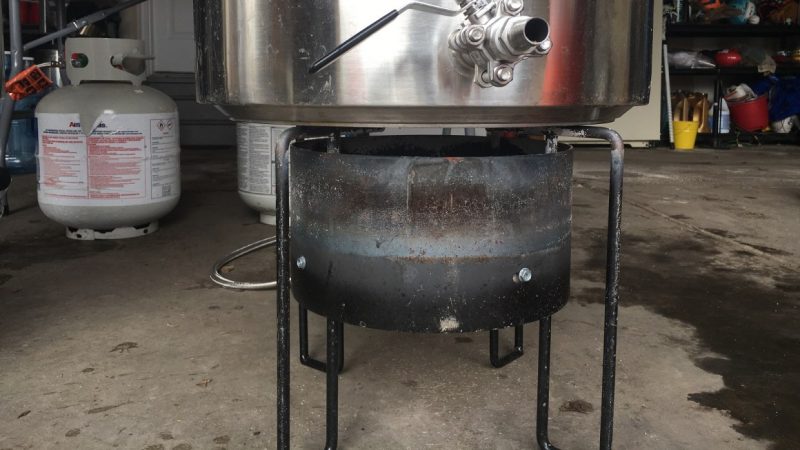 It was during this time I weighed out and milled the grain. 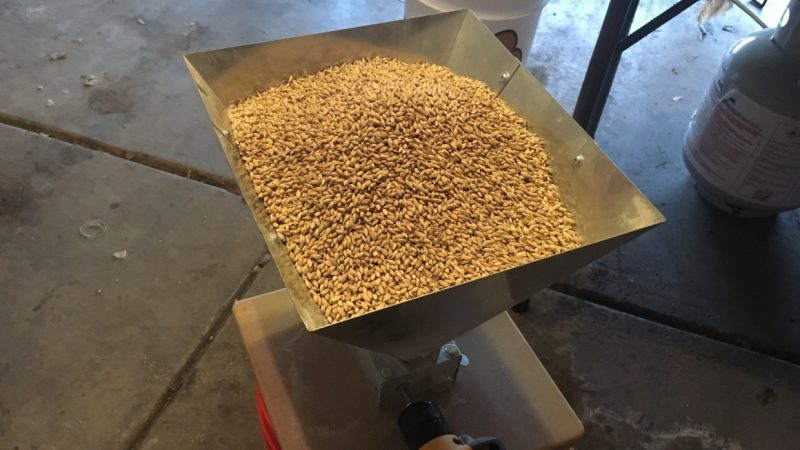 With the water heated, I mashed in to hit my target rest temperature. 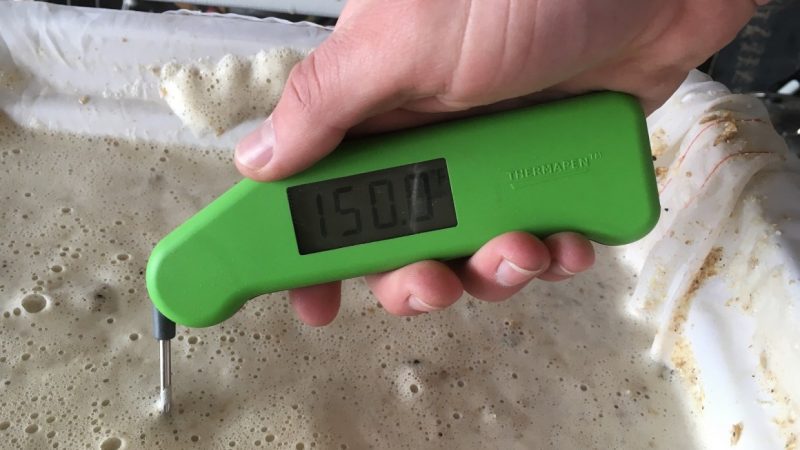 I wasn’t quite able to perform the no sparge I’d intended with my converted cooler MLT and had to use a very small amount of sparge water to get to my pre-boil volume, which I added as soon as there was room in my tun while collecting the sweet wort. 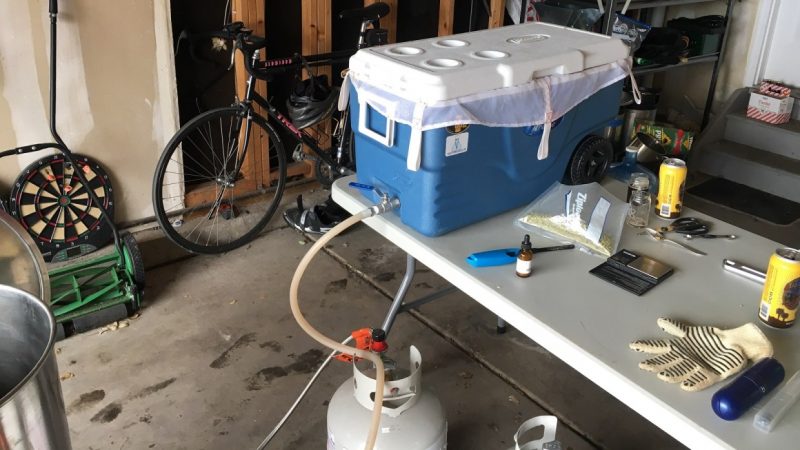 The wort was boiled for 60 minutes with hop additions made at the times noted in the recipe. 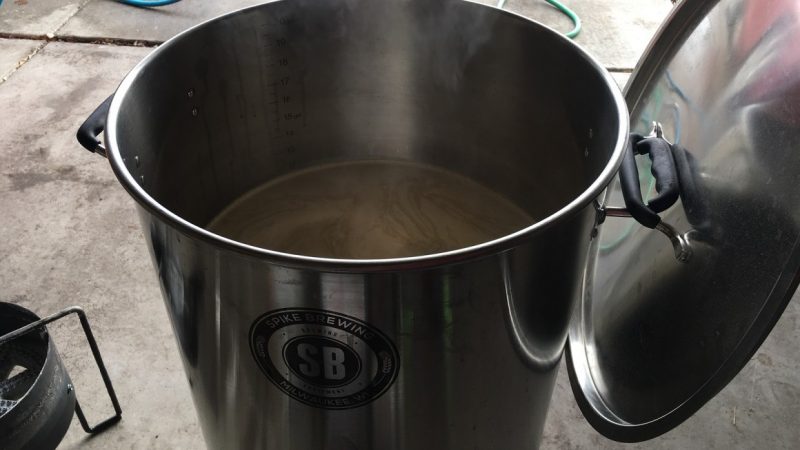 After the boil was complete, I very quickly chilled the wort. 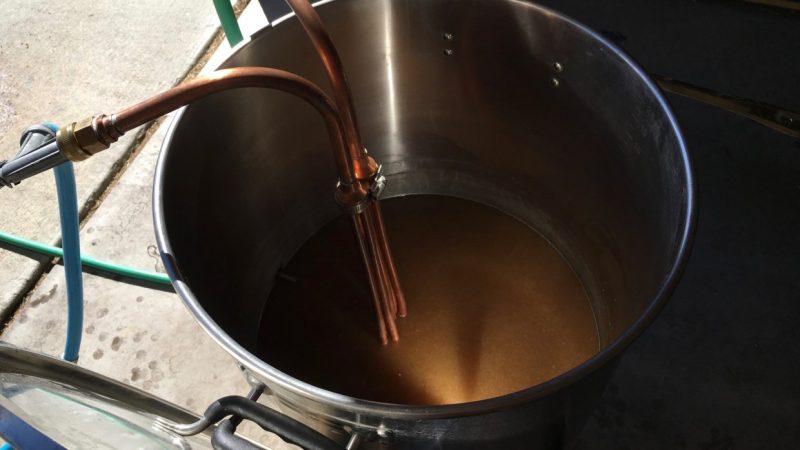 A hydrometer measurement showed I’d not only hit my target of 1.053 OG but achieved a gorgeous color. 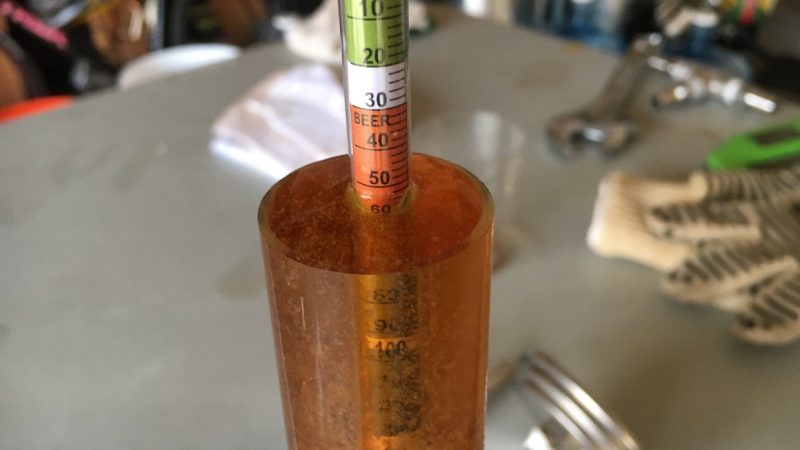 After giving the wort a homogenizing stir, I used a splitter to fill identical fermentors simultaneously, cutting off the flow to one when it reached the 2.5 gallon/9.5 liter mark while the other received a more normal 5.5 gallons/21 liters. The fermentors were then placed in my temperature controlled chamber. 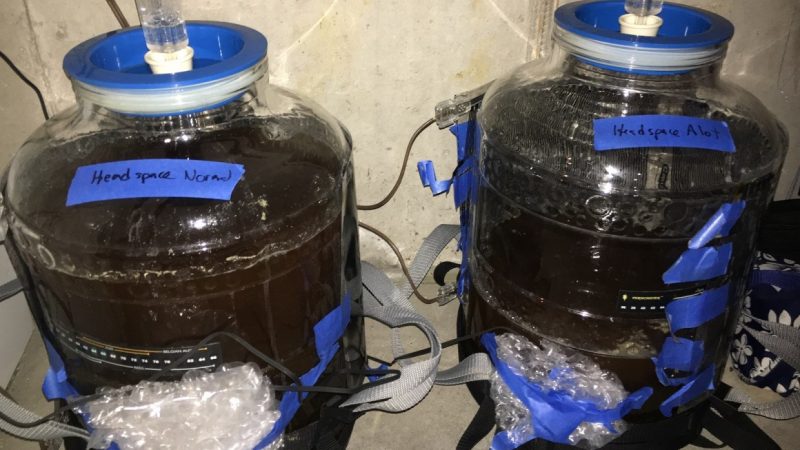 At this point, I split the slurry from my decanted starter into separate flasks such that the normal headspace batch received approximately 200 billion yeast cells while the batch with a lot of headspace was pitched with a calculated cell count of 100 billion. Both beers were observed to be bubbling away when I checked on them 36 hours after pitching. 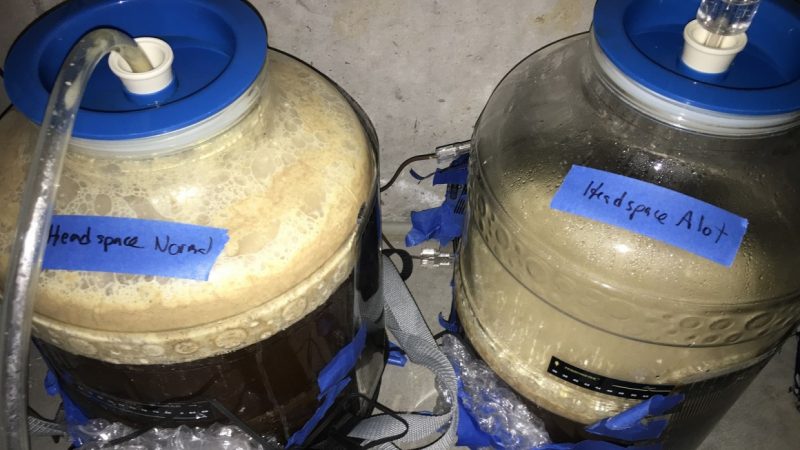 Activity was dwindling by 5 days in, so I bumped the temperature up to 72°F/22°C to encourage complete attenuation and clean-up of any undesirable fermentation byproducts.

With signs indicating fermentation was complete, I took hydrometer measurements confirming FG had been reached on both batches. 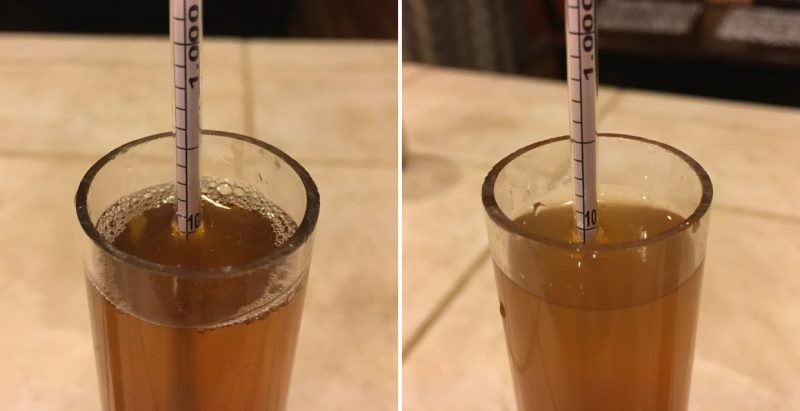 I transferred both beers to serving kegs before cold crashing and fining with gelatin. 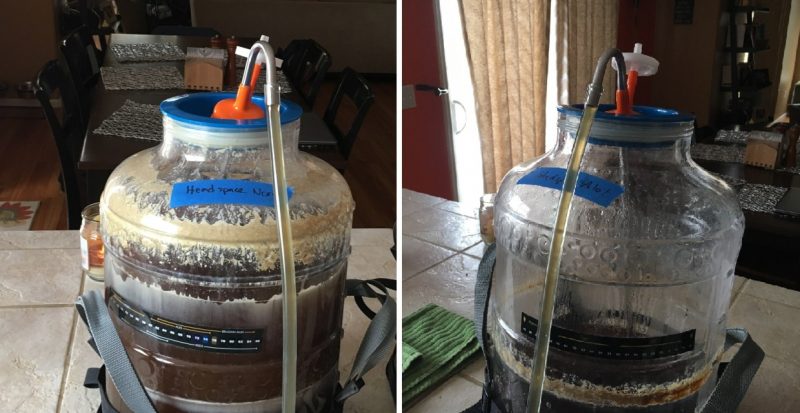 Following a brief period of burst carbonation, I reduced the CO2 to serving pressure and let the beers condition a few more days before serving them to tasters, at which point they both look great! 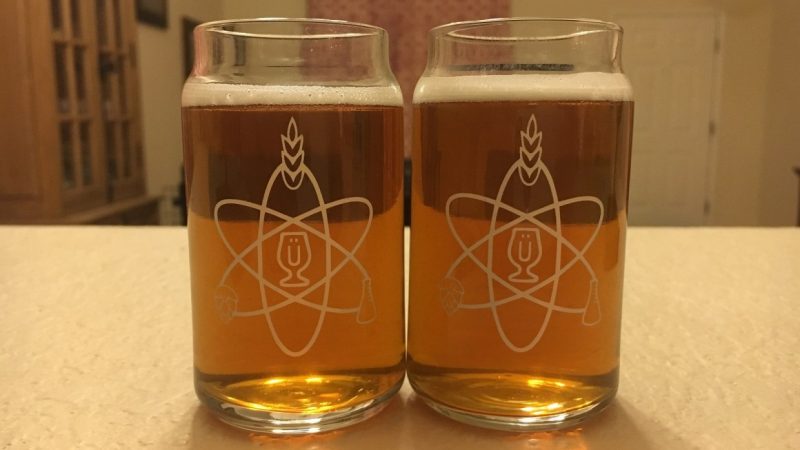 The 11 participants who were correct on the triangle test were subsequently instructed to complete a brief preference survey comparing only the different beers while remaining blind to the variable of investigation. A rather notable majority 8 tasters endorsed the beer fermented under a normal/low amount of headspace as most preferred, while only 2 preferred the high headspace beer and 1 felt there was no difference.

My Impressions: In multiple blind triangle attempts, I admittedly relied on the fine art of random guessing, which panned out beautifully in my performance. I simply could not tell these beers apart, they tasted exactly the same to me, which surprised me given the results. As for the beer, it was alright. While I initially perceived a character I’ve come to expect from beers hopped with Chinook, not necessarily pleasant given the style of beer I was aiming for, things seemed to mellow out after a few weeks in the keg, which made it more pleasant. Still, I won’t be brewing this recipe again in the future.

The results of this xBmt not only provides evidence that headspace likely matters, but it also supports the hypothesis some have posited in response to past fermentation vessel xBmts that fermentor dimension may also play a role in beer quality. Of the various possible reasons participants were able to detect a difference between beers fermented with different levels of headspace, it’s difficult for me not to presume oxygen wasn’t a primary culprit. Considering the beer fermented with a lot of headspace had a much greater surface-to-volume ratio, it seems reasonable that it was at increased risk for oxygen exposure. With British brewing methods on my mind, I was reminded of the use of Yorkshire square fermentors and wondered if maybe this shallow environment causes yeast to express itself differently.

Interesting as I found the triangle test results to be, it was the preference ratings from those participants who correctly identified that odd-beer-out that I was really surprised by. While preference ratings are commonly split fairly evenly, such was not the case in this xBmt where 8 of 11 tasters endorsed the normal/low headspace beer as their preferred. Almost enough to influence my own beliefs about the impact headspace has on beer quality despite my inability to reliably tell them apart. Almost…

I’ve always assumed active fermentation produced a blanket of CO2 adequate enough to protect the underlying beer from oxygen, an assumption these results have certainly forced me to question. My brew days rarely consist of batches small enough to be of concern, but when I do venture down that path, I’ll be sticking with appropriately sized fermentors that reduce the likelihood of headspace affecting my beer.