India pale ales, specifically those native to New England, are some of the most sought-after beers in the country. Think The Alchemist, Hill Farmstead, Trillium Brewing, Tree House Brewing, and Maine Beer Company. However, over the last few years, the IPAs of New England have found their way westward—and for good reason.

Neil Fisher, head brewer at Weldwerks Brewing Company in Greeley, Colo., believes a major contributor to New England IPA’s growing popularity is that it appeals to a larger demographic than its more bitter West Coast counterparts. “One of the most distinguishing characteristics of NE IPAs is their restrained bitterness, which makes them more approachable to casual consumers,” Fisher wrote in an email. “The hop rates are typically equal to or higher than other traditional American IPAs…which means they also appeal to hop heads and craft beer enthusiasts.”

John Kimmich, owner and brewer at The Alchemist in Waterbury, Vt., believes if something is “worth it” and delicious, it’ll create a zealous culture around it. His beer lives up to expectations batch after batch. If you’ve had Heady Topper, or any of his other beers, and you come back to it and it tastes just as good, it’s a testament to the amount of detail on the brewer’s part. Although Kimmich won’t provide too much detail about his brewing process, he doesn’t think he’s doing anything revolutionary. That said, let’s get into some tips for brewing a New England IPA.

At this point, most of us know New England IPAs have crazy hop aromas with restrained bitterness to follow. When you smell a New England IPA you expect a burst of bitterness in the taste, and what you often find are fruity, citrusy flavors and a creamy, soft mouthfeel. It kind of messes with your expectations of what an American IPA stands for.

How do breweries pack in so much flavor without all the bitterness? We asked Fisher, Kimmich, and Ryan Scott, head brewer at Odd13 Brewing in Lafayette, Colo., for some tips.

More dry hops are added after primary fermentation to lock in the juicy hop aroma. The resulting beer is very hop-forward but not bitter. The mouthfeel is soft and creamy due to the addition of oats and/or wheat, and the predominant flavors and aromas are tropical. 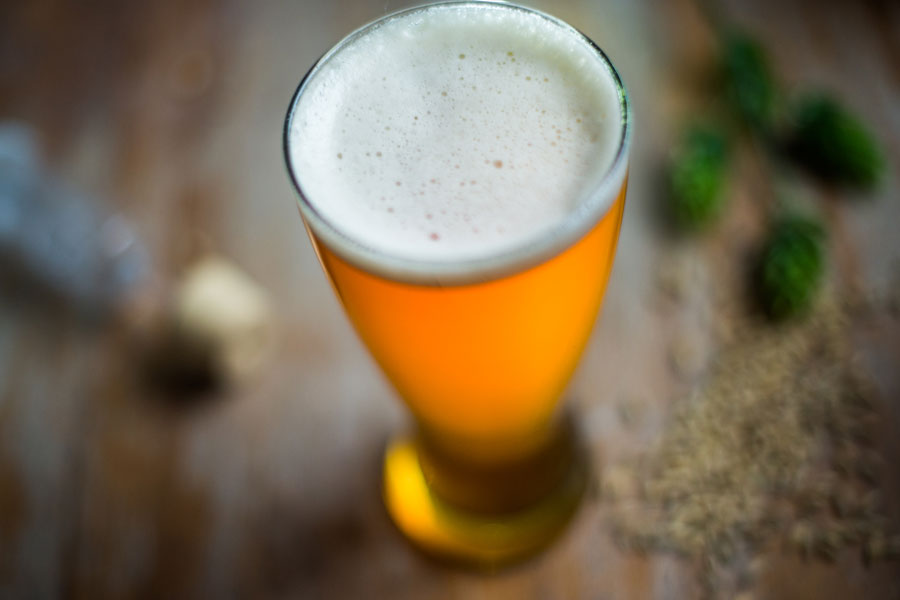 In with the Hazy Crazy IPAs

To some, haze indicates an unfinished or flawed beer. However, many New England IPA brewers don’t see eye-to-eye with this belief. When asked about the haze at first, Fisher said he “never really [had] been too worried about the haziness of Juicy Bits because we designed the beer and the recipe with specific parameters in mind, such as hop flavor, hop aroma, and mouthfeel, and the haze was a byproduct of our process.”

To Kimmich, haziness isn’t the goal. Heady Topper is an unfiltered beer, so it’s natural for the beer to come out hazy when using such an extreme dry-hopping regimen. In the end, it’s just an IPA. It has unique characteristics. It’s somewhere between cloudy and sparkling, and it will flocculate after it’s been packaged. There’s talk of adding flour and other strange additives to artificially create the haze and mouthfeel, but Kimmich doesn’t even use high-protein grains like wheat or oats.

“I stopped using wheat in any of my beers a number of years ago when my wife was diagnosed with Celiac disease,” says Kimmich. “I generally don’t use grains like that unless it specifically demands the use of wheat or oats. The mouthfeel of my IPAs and all of my beers is generated in the water treatment and mash process.”

Water treatment and mash process are two key components that truly separate New England IPAs from their brethren. Let’s look at a few tips provided by the three brewers:

Many of these beers derive much of their flavor from unique yeast strains. Heady Topper makes use of a proprietary yeast that’s been rumored to have originated from somewhere in London. If you’re looking to cultivate yeast from dregs of Heady Topper, we’d recommend against that because you’ll be gathering the least viable cells. Sure, there’s yeast there, but that yeast didn’t drop out over the course of three weeks of conditioning. You definitely don’t want to brew with it.

Here are some tips from our crew of New England IPA brewers on yeast.

This article is by no means a recipe for creating a New England IPA. As I said in the beginning, I’m unfit for that task. But following advice from these award-winning professionals who brew this style is a good start. As for Kimmich, you should do what he did to create such a unique beer. “Read everything you can get your hands on and experiment constantly. Everything you need to know is in a book or magazine article somewhere. Too many people short themselves by not doing enough research with their water treatment.”

Fisher sums up the spirit of homebrewing perfectly. “Have fun and make it your own. One of my favorite things about the style is the vast number of different interpretations from breweries [and homebrewers] across the country. I can’t wait to see how homebrewers will expand the style even further with their own innovations and creativity.”

John Moorhead, the National Homebrew Competition Director and Project Coordinator, lives in Boulder, Colorado. If he isn’t tasting, brewing, or talking beer, you’ll see him running, roaming or biking around the mountains – or cooking Thai food and blasting vinyl. Occasionally, John will write about homebrewing happenings, and if he plays his cards right, they might show up here on HomebrewersAssociation.org.