You can make beer! Let’s set those idle hands and that curious mind on the exciting journey to homemade beer.

While learning how to make beer, you’ll find that the creativity and novelty stay fresh batch after batch. There’s always some new technique to try or ingredient with which to experiment.

As with making sourdough, you’ll need some common kitchen gadgets to help you along the way. You probably have almost everything you need already, but if you don’t, you can order online from your local homebrew supply store (or visit in person when it’s allowed) to pick up supplies.

For your first batch, you can purchase a simple extract recipe kit of your favorite beer style from a local homebrew shop. We suggest starting with an extract-based beer recipe since it’s easier for first timers and requires less equipment.

How to Make Beer the Easy way

Once you have your equipment, recipe, and ingredients (and a rerun of Tiger King queued up), your focus is learning how to make beer the easy way in your kitchen. 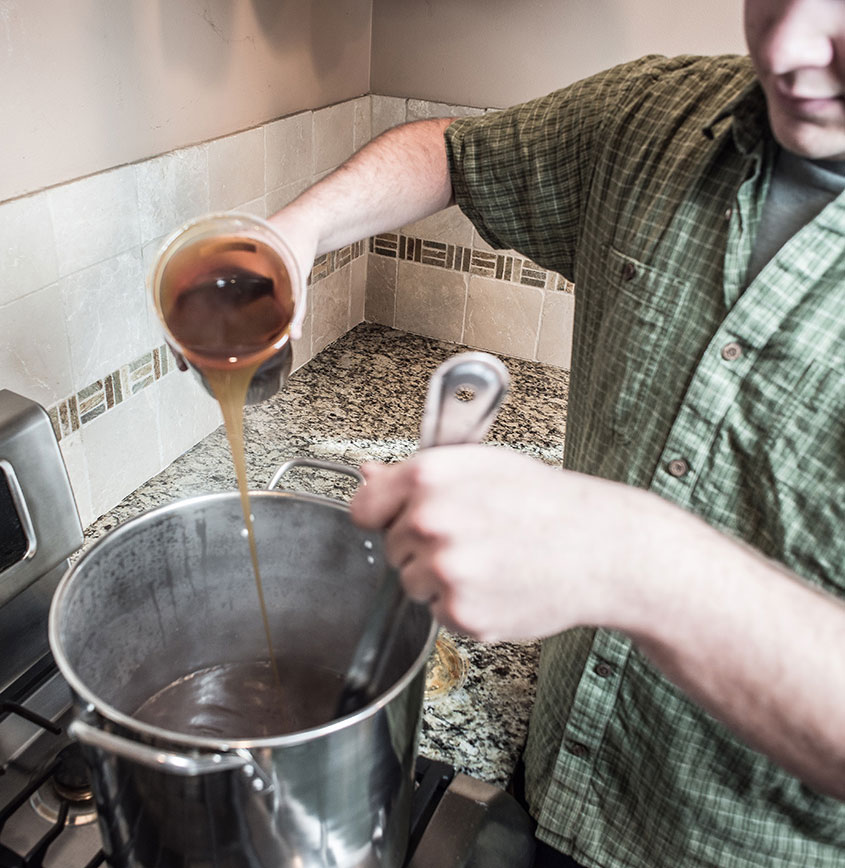 On brew day, you’ll follow the recipe step by step to make wort, the term for not-yet-fermented beer. Wort is made by boiling water and pouring in the syrupy malt extract. Tip: once you move to all-grain brewing, learn how to make flour and bread with used brewing grains.

Once the malt extract has dissolved, return the liquid to a boil, where hops and other ingredients are added as noted in the recipe. Tip: hops additions are typically labeled with the time left until the end of the boil. So, a 60-minute hop addition during a 60-minute boil would be added right when boiling starts. A 5-minute addition is added 5 minutes before you turn off the heat.

After boiling, cool the wort down between 70°F and 75°F using an ice bath or a purpose-built chiller. The cool wort is then moved to a fermentation bucket or vessel where yeast is added.

Once the yeast is added. the fermentation stage should begin within 24 hours and be finished and ready to bottle or keg after a few weeks. Foaming and bubbling in the fermenter is a great sign that your yeast is working hard!

Make Your Own Beer For The Long Haul

Learning how to make beer at home is a great investment in yourself and a quality skill to have at the ready.

Making beer is an exciting process where you can see your effort and imagination come to fruition in a bottle or keg. Even better, you can easily share your libations with friends and family!

How to Make Sourdough Pancakes & Waffles

How to Make Sourdough Pizza Dough