As a leader in your homebrew club, you may be responsible for developing educational content …More

For the first time ever, my homebrew club, the Maltose Falcons, recorded a session of …More

How to Troubleshoot Homebrew at Your Club Meetings 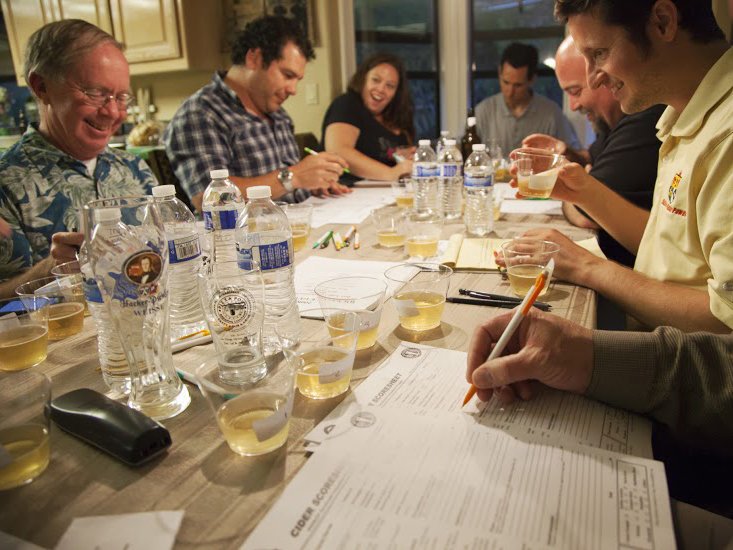 Everyone starts homebrewing for the same reason: beer is awesome! What many people don’t realize at first, though, is that a whole community is devoted to the hobby we all love so much. The easiest way to experience the community-driven side of homebrewing is to check out your local homebrew club’s next meeting.

If you’re like me, then you might have mixed feelings about doing this. Maybe you’re new to the hobby, or maybe you prefer to brew alone. That’s fine.

Approaching your first club meeting can be unnerving. It’s natural. But don’t let that stop you. You’ll quickly realize that you should have been going sooner. The wealth of experience you gain in conversations with other club members will make you a better brewer—and you will have fun doing it. No matter how many books or blogs you read, there’s no substitute for the new ideas and techniques you learn from club meetings.

So here are my 10 tips on approaching your first club meeting.

This isn’t the Skull & Bones Society. You will be welcomed, no matter how knowledgeable you are. Some people in clubs don’t even homebrew; they just enjoy the people. I guarantee you will be happy you went. I hadn’t even brewed anything yet when I attended my first club meeting. There’s no such thing as a stranger in this crowd.

When I first started going to club meetings, I had read enough to recognize words like “sparge” and “flocculate” as I eavesdropped on a few conversations from the back of the room, but I was still too cautious to approach anyone out of an ill-placed fear that my lack of knowledge was somehow a bad thing. However, I was quickly approached by another attendee at the meeting with a bottle of a recently brewed honey porter that she and her brother had made to share.

If someone tells you to try all-grain and you aren’t interested, no problem! Beer is beer. Let’s not overcomplicate it. Some people have been brewing for 20 years doing only extract and make better beer than the all-grain folks.

That is exactly what a club is for: sharing information in a fun way. No matter what your brain might be telling you, it’s not inappropriate to approach a complete stranger at a club meeting and ask questions. Every member I spoke with at my first meeting was happy to answer anything I asked, though all of my questions eventually led to the same answer: “Get a copy of How To Brew.”

If homebrew law in your state allows it and the club meeting is held at a venue that permits it, bring beer! Most club meetings follow a similar format and start with a meet-and-greet bottle share, followed by some sort of educational component.

Even if you don’t have any homebrew available, pick up a bomber or a six-pack from your local craft brewery to bring. It will be easier to break the ice in conversation, and there’s a chance that someone in the club has a clone recipe if it’s a local favorite.

If you are still hesitant to interject yourself into a seemingly tight-knit group, bring a friend or significant other with you.

I was fresh out of college when I joined my first club. I went to my first meeting alone, but by the next meeting I had convinced my uncle—a recently retired pharmacist—to come with me to check it out. He, too, had never even homebrewed, but he left the meeting already thinking about what he wanted to brew for his first batch. He is still active in that club today.

Most clubs have some sort of online presence, whether it be a full-fledged website or social media presence. Do your best to look up any info about how long the club has been around and what its regular activities are outside club meetings. Do club members host competitions, or are there volunteer efforts you’d be interested in?

8. Talk To the Club Execs

These folks are going to want to talk to you at your first meeting and will make a point of introducing you to other club members. It’s their job to keep the club healthy and growing. If the club has a president or events manager, you’ll want to talk to them. It’s possible they even have a person responsible for providing orientation for new members.

9. Try On a Few Different Clubs

If you live in an area with more than one club, it’s worth it to test each one out. Maybe you will like one meeting venue better than another, or maybe you prefer a smaller crowd to a bigger one (or vice versa). Or, just maybe, you like them all enough to join more than one! There won’t be any turf wars between homebrew clubs fighting over member loyalty anytime soon.

Joining a club is different from attending meetings. Most clubs have annual dues that go to providing members with many great benefits such as local discounts, a members-only library, homebrew competitions, club events and outings, loaner equipment, and more. So, if you leave the meeting thinking that you could see yourself becoming a regular attendee, then do yourself—and the club—a favor and sign up as a full-fledged member.