This article is an online companion piece to the article “CO2: It’s a Gas” by Chris Colby featured in the July/August 2020 Zymurgy magazine.

As summer arrives and we collectively navigate the waters of safely visiting our favorite small and independent breweries, the effects of COVID-19 continue to ripple through our lives. Brewers and other industries alike now face a shortage of carbon dioxide.

Carbon dioxide plays a vital role in beer. This molecule can be overlooked at times in place of exciting hop aromas, intense malt flavors, or complex yeast character. However, the gas is the first thing we experience when drinking beer, from listening to the “pop” of a bottle to watching foam rise in a glass.

What is Carbon Dioxide?

A carbon dioxide molecule is two oxygen atoms connected to a carbon atom, lined up in a row, which makes it non-polar. When oxygen bonds to the carbon atom, the two oxygen atoms share electrons equally, giving it a neutral charge. In comparison, water (H2O) is polar because the two hydrogen atoms attached to the oxygen atom are both on the same side of the molecule, which lends a slight positive charge to that side (and a slight negative charge to the other).

Furthermore, the two oxygen atoms in CO2 are double bonded to the carbon atom, which makes it non-reactive. However, non-reactive does not mean dormant—reactions involving CO2 in brewing affect mash chemistry, pH, and, of course, carbonation.

The double bond is important to note because it takes more energy to break double bonds than single bonds, making the molecule more stable. This also makes it difficult to ionize, which is the process of converting a molecule into an electrically charged molecule by gaining or losing electrons (e.g. releases energy that is absorbed by material surrounding the ionized atom).

Overall, carbon dioxide has a complex role in how it interacts with the components in beer and is something worth remembering as you enjoy your next pour.

Carbon dioxide is what creates the carbonation in beer, and it is introduced in one of two ways: natural carbonation or forced carbonation.

If you bottle condition your beer and want to carbonate to a specific level, you need to know how much carbonation your “flat” beer contains to add the right amount of priming sugar. That sugar is then consumed by suspended yeast in the beer and then converted into ethanol, CO2, heat, and more yeast.

Forced carbonation involves pushing more gas into solution (beer) through applied top pressure or a diffusion method. After primary fermentation, beer reaches a saturation point with CO2 and cannot absorb more of the gas unless it is put under pressure. Pressure and temperature determine how much gas is absorbed, and most homebrewers use a chart to figure out what pressure and temperature will yield the desired CO2 level. 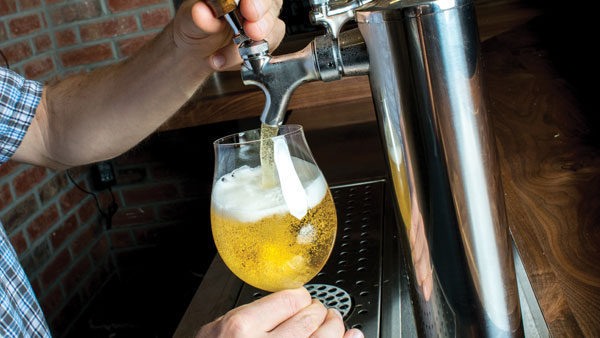 Carbon dioxide is produced primarily as a byproduct of industrial manufacturing, including the production of ethanol, ammonia, and hydrogen, and through refining processes and natural wells. Much of the carbon dioxide—40 percent—in the United States comes from ethanol plants, which produce 3 to 3.5 million tons per year according to the Renewable Fuels Association.

Another 15 to 20 percent of the nation’s CO2 comes from refineries, where methane reformers make the gas as a byproduct to hydrogen. The remaining CO2 comes from fertilizer manufacturing (ammonia) and natural wells. The source of the gas differs geographically due to proximity to the customer, access to shipping, and availability of transportation.

Much of the ethanol produced in the United States is blended into gasoline and used as a fuel. The Environmental Protection Agency (EPA) requires many oil refiners to blend biofuels such as ethanol into gasoline for motor vehicles, which yields an ethanol fraction in most standard gasoline of about 10 percent (E10).

As a result, CO2 supply is linked to fuel demand and production. Both have fallen because of (1) work and travel restrictions imposed to limit the spread of coronavirus (COVID-19) and (2) reduction in ethanol requirements in gasoline back in 2019.

With this culmination of events, estimates show the production of CO2 has decreased by approximately 20 percent and could reduce by more unless action is taken to stabilize existing sources of CO2. Numerically speaking, U.S. weekly ethanol output has been less than 700,000 barrels per day since April according to the Energy Information Administration. Normally, the figure is about 1 million barrels per day.

And the gas has widespread use. Carbon dioxide is used to produce food and soft and alcoholic drinks, stun animals before slaughter, extend the lifespan of packaged meats and salads, create dry ice, perform medical procedures, manufacture semiconductors, and extract the crude oil.

The loss of CO2 production has been somewhat offset by a decline in demand caused by shutdowns in the meat-processing industry over the past few months. However, this relief is temporary as demand for CO2 from meat-processing plants will start to rise again. U.S. supplies of CO2 could remain depressed if the coronavirus causes a permanent decline in demand for driving and transportation.

There are alternatives to CO2 collection, such as distilling it from the air or cleaning less pure CO2. Lower-grade CO2 will contain larger amounts of impurities like ammonia, benzene, oxygen, and carbon monoxide. However, cleaning and scrubbing less pure CO2 is expensive, inefficient, and not an adequate long-term solution.

The gas is a difficult and expensive product to transport. While some areas may not feel the pinch, others certainly will. As emergency storage supplies dwindle, there is a growing worry rationing will take effect, with priority given to animal welfare and then the biggest customers, with small and independent brewers getting the proverbial short end of the stick.

What Homebrewers Can Do

We homebrewers, now knowing the situation, should not be caught off guard if our local homebrew supply shop is short on CO2 or out of stock. We have options that commercial breweries do not enjoy such as our volume and flexibility.

Whether you bottle or keg, it’s easy to add dextrose or sucrose to create natural carbonation. Yes, kegs will still need CO2 to dispense finished beer, but if there is a run on CO2 and we can’t obtain what we need, we can resort to our prime-and-bottle roots.

We do not have to resort to priming and bottling, though. Cask conditioning and spunding are viable options for larger volumes. They involve packaging up beer as it finishes fermentation to capture the remaining CO2 and create carbonation. It short, the cask acts like one giant bottle of beer.

As a community, we can support one another through these challenging times. And although small on an individual scale, collectively we would all be doing our part to ensure we all celebrate the day we can finally share a beer together. 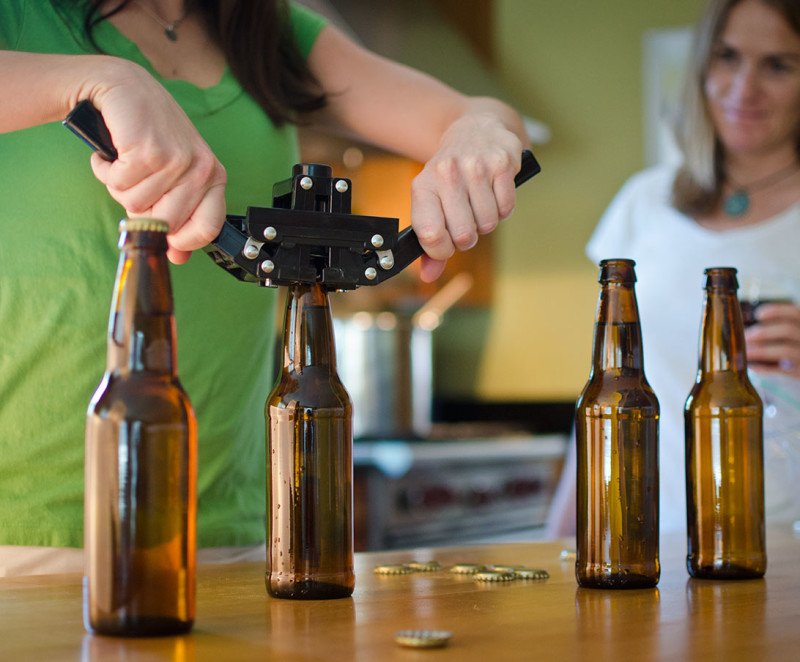 You Can Make Beer. Just Follow These 3 Simple Steps.