May 6, 2017 marked the 20th annual celebration of Big Brew for National Homebrew Day. Homebrewers from 11 different countries and territories and 49 states fired up their brew kettles and brewed more than 2,000 batches of beer at 384 Big Brew events around the globe. The American Homebrewers Association (AHA) estimates that over 7,500 people participated in this year’s celebration, brewing a record 19,222 gallons (72,763 liters) of beer.

Craft breweries, homebrew shops and clubs, and a number of individuals hosted Big Brew events in their own backyards. Of the 384 Big Brew sites,

Those other businesses included craft beer–centric restaurants and hop farms, and one Big Brew event even mashed in at John Smith’s Bay Beach in Smith’s Parish, Bermuda! 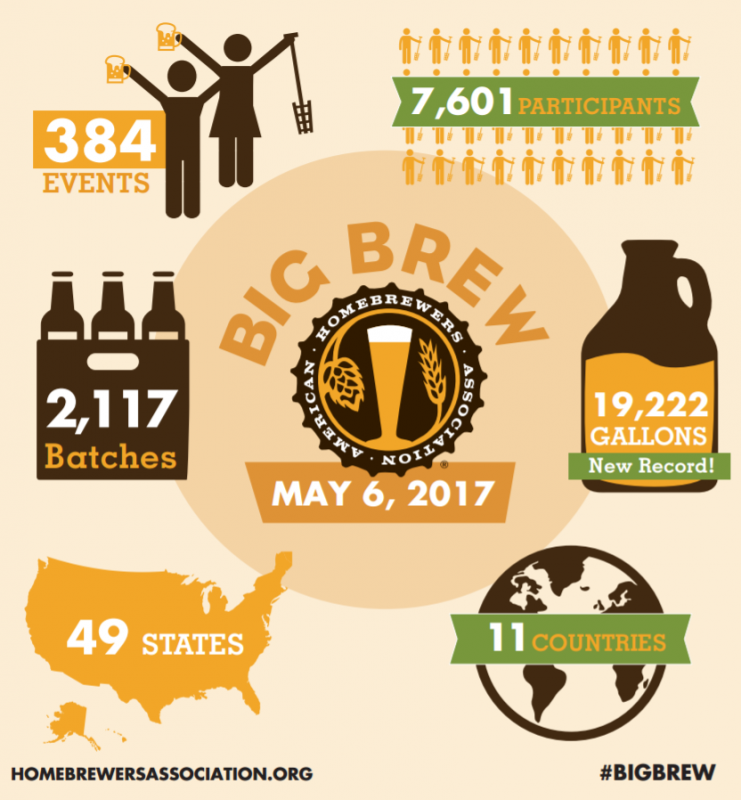 The Glass City Mashers in Toledo, Ohio claimed 46 batches, the most brewed for Big Brew 2017, and Great South Bay Brewery in Bay Shore, N.Y. reported the largest volume of beer, a whopping 1,310 gallons (4,959 liters) of homebrew.

For the first time in 20 years of celebrating Big Brew, the AHA is excited to announce that the largest reported attendance for a single site was not from a Big Brew event in the United States. With 200 reported attendees, the Hovevey Zion Homebrew Club’s 8th Brew Party in Tel Aviv, Israel is the first international Big Brew site to host more homebrewers than any other event in the US!

Big Brew 2017 attendees were encouraged to brew one of three recipes: Rushmore American IPA, Battre L’oie Saison, and Klang Fredenfest Oktoberfest Lager. All recipes were taken from the newly released version fourth edition of How to Brew by John Palmer, a book that has taught thousands of homebrewers to craft their own beer since it was first published in 1999.

Big Brew for National Homebrew Day finally turns 21 next year on May 5, 2018.

“Brew For Good” Event Returns to Minneapolis for Second Year