Brewing Brewers: Beer in College is Not What You Think

Today’s college kids are not the same.  I see them as freshmen, and again as seniors, and the evolution is stark.  Most freshmen have never lived away from home or had a job.  They’ve been shuttled from sports to lessons, and are truly dependents.  By the time they’re seniors, they’re driven to succeed, aware of the debts they owe, and the hard work ahead.  Most seniors work at least one job, even full time, to keep up with their bills while in school.  They know how to build networks and actively seek opportunities.  When they come to my Brewing Arts class, they’re already planning their careers.  And then they discover brewing.

For generations, American culture has demonized beverage alcohol to the realm of ‘evil toxic weapon’ rather than a complex food.  (It’s regulated by the Bureau of Alcohol, Tobacco, Firearms and Explosives, not the Food and Drug Administration.)  And home brewing was only legalized in all 50 states as of 2013.  But WE know brewing is culinary arts, with the chemistry of molecular gastronomy and the microbiology of baking.  And it’s a rapidly expanding market.

So I ask Brewing Arts students why they’re taking the class.  Some students say they don’t even like beer, but know it’s an important part of the business.  Others say they just had a free elective to fill, and thought it would be fun.  Some are taking it as part of their Sommelier minor, or Food and Beverage Management degree.  One or two may have brewed with their Uncle Bob in the past.  Then I warn them all – “You will learn way more than you thought there was to know about beer.  You will learn how to write a recipe for and home-brew an all-grain batch of beer.  This will become an addictive hobby, and a great way to connect with others.  All of the beer you drink will taste better.  And best of all, in the event of an apocalypse, you will be the LAST one kicked off the island.”

After the 11 weeks are through, they are totally hooked, and most keep in touch after they leave.  Their course review comments have a consistent thread.  “I wish I knew about this class as a sophomore.”  “Why didn’t my high school guidance counselor even mention brewing?  I would have started earlier.”  “I am so happy – this is my dream job.” “I can’t wait to learn more!”  But that’s the issue – how?

When students ask, “How do I get a job at a brewery?” I say, “Knock on the door.  Offer to help out for free.  If they like you, they’ll hire you.  Most small breweries are built by people just like you, who wanted to take their passion to the next level.  Brewers also have to wear many other hats, and do a variety of tasks.  Skills can be taught, but it’s a small team, so team chemistry is most important.”  More often than not, this job-seeking tactic has actually worked out, as attested to many alumni who have gone on to work in the industry, as beer sommeliers, managers, brewers and assistant brewers, brasserie and brewpub chefs, and more, but most only learning on the job. 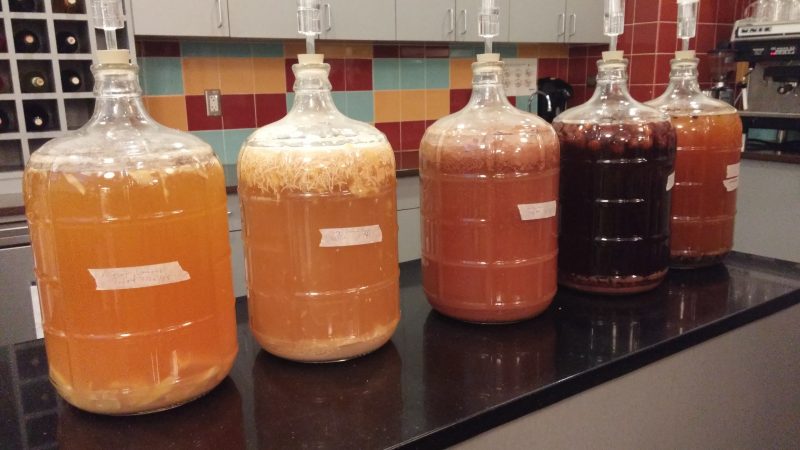 Until recently, the avenues for brewing and beer education were limited to either very expensive advanced degree programs and specialized formal education, or the very informal back-yard turkey-fryer classroom.  Both of the above are an excellent means of learning, but the demand for skilled labor at all levels in the craft beer industry, including sales and service, cannot be met by either of these alone.  So the education middle ground is blossoming, and homebrew clubs and organizations can maximize this opportunity for recruitment by getting involved.

Not that long ago, perceived legal, ethical and socio-moral barriers made it awkward at best to discuss beer in college.  But most students today have never seen or even heard of the movie, Animal House, and very few think of beer as an ‘alcohol delivery system’, as hard as it is for us ‘old folks’ to believe.  Instead, most millennials think of craft beer as a means of connoisseurship, supporting the local economy, community involvement, a means of exploring global flavors, and (most importantly) a cool expression of personal taste.  The boom in community colleges offering beer appreciation and home brewing classes is not a fad, it’s a response.  Because craft beer is food, many culinary schools are also on board.

A confession – I was once a wine person.  I still like wine, drink wine, even make wine at home, but I’ve proudly “crossed to the dark side” for beer, as my department chair says.  When I started the JbreW club 12 years ago, it wasn’t because I was an avid beer enthusiast – far from it.  What I saw was an unmet need amongst our students.  They were hungry to learn about craft beer, but the courses didn’t exist yet.  So we organized, met on the weekends, and fired up the ½ barrel pilot plant, learning as we went along.

Fast forward to now, the JbreW club has won awards for our beers and meads in competition, and we host our own Ocean State Homebrew Competition.   JWU now has brewing courses taught on all four campuses across the country –Providence, Charlotte, North Miami and Denver.  We also now have a Study Abroad Craft Brewing program (with Brewlab UK), and Beer Sommelier and Beer Judge Certification courses.  By next year, we’ll have both a Craft Brewing Minor and Beer Sommelier Minor, and another Study Abroad for Beer Culture and Cuisine in Europe.  An advanced Mead and Honey course, and a Ciders and Fruit Wines course are also on the menu.  In the very near future, JWU will also be offering Certificate Programs to the public for both Craft Brewing and Beer Sommelier Certificates, and one-day and weekend courses for continuing education for professionals.

And NONE of this would have been possible without the help of our local home brewing community, for their mentorship and support through the years. ‘Uncle Frank’ Fermino took our club under his wing and taught us how to use the system, build recipes, enter competitions, and so much more.  Paul ‘Zok’ Zocco showed us how to build and run our own competition.  Other shops and breweries and homebrew clubs helped as well, sponsoring our competition and student club over the years. And I KNOW we are not alone – the home brewing community is chock full of generous, open-minded folks who love to ‘pay it forward.’

I love beer and love brewing, but I REALLY love my job – I make brewers!  Here at JWU, I encourage all of my students to join the AHA.  I give each student a current copy of the “Introduction to Homebrewing” issue of Zymurgy, and the local “Yankee Brew News” to keep them up-to-date on local breweries, brewpubs, events and more.  I send them to our local homebrew shops, competitions and events, and also show them how to find shops and clubs when they leave school, wherever their travels take them.  So, do you know who your local college students are?  More importantly, do they know about you?  Become guest speakers, offer on-campus demos, support school clubs and organizations, and brew up some more brewers in your town. Cheers!

Home Brewers Drink in their Craft

In 2014, the Radegast Club of the Year Award was established to honor a homebrew …More

Melvin Brewing wants to brew and can your homebrew club’s beer! Like many craft brewers, Melvin …More